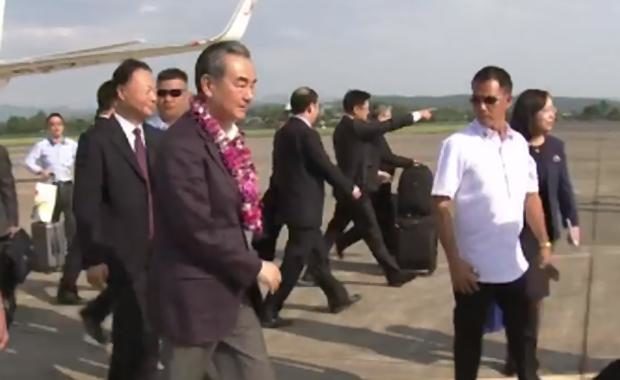 Wang vowed that China would speak up for the President’s concerns before United Nations and international human rights and multilateral bodies about the issue.

“These are just causes which are conducive to providing a tranquil environment for the economy and people’s lives of the Philippines,” Wang said during his meeting with Foreign Affairs Secretary Teodoro Locsin Jr. here.

Wang also led the inauguration of the Consulate General of the People’s Republic of China in Davao City.

He assured China’s “firm support for the Philippines in upholding national security and stability.”

Wang said the President’s the fight with illegal drugs and terrorism were “just causes” that would help safeguard regional peace and stability.

The President’s crackdown on illegal drugs was widely criticized by local and international human rights groups who claimed the violence resulted in the death of over 12,000 people, mostly poor drug suspects.

The government gave a smaller toll of not more than 5,000 deaths and that over a million drug suspects had likewise been arrested or surrendered.

“We will continue to speak up for the just causes of the Philippines in the United Nations, human rights organizations and other multilateral institutions,” Wang said.

In combating terrorism, the Chinese envoy said Beijing would continue to provide support to the Philippines in terms of “assistance in kind, intelligence-sharing and capacity-building.” /atm

ADVERTISEMENT
Read Next
Despite close encounter with China, US to continue sailing ships in South China Sea
EDITORS' PICK
Taal Volcano flexes signs of restiveness anew
‘A greener, cleaner tomorrow’: A how-to guide for Filipinos who want to help with today’s energy crisis
DOH: Second person ‘under investigation’ for 2019-nCoV in Tacloban City
China expands lockdowns to 25M people to halt viral outbreak
SM continues to send relief assistance to remote towns in Batangas
Get exciting deals and discounts when you download the new McDonald’s App
MOST READ
Taal Volcano flexes signs of restiveness anew
Lacson on Duterte’s threat to end VFA over Bato’s canceled visa: Where is the connection?
PH to ‘start process’ of VFA termination — Locsin
172 Chinese tourists arrive in Bohol
Don't miss out on the latest news and information.