Despite close encounter with China, US to continue sailing ships in South China Sea 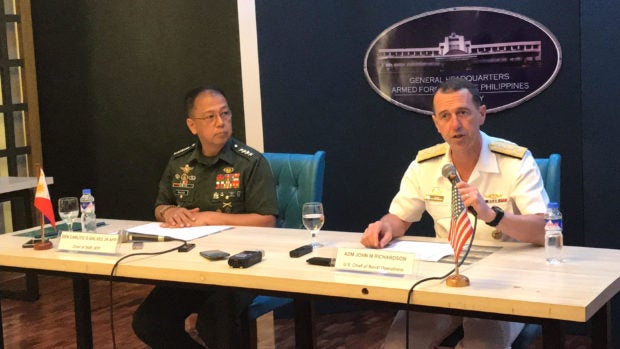 Armed Forces of the Philippines chief Gen. Carlito Galvez Jr. and Admiral John M. Richardson, US Chief of Naval Operations in a press briefing on October 29, 2018. PHOTO by Frances Mangosing/INQUIRER.net

The US military will continue sailing ships near the disputed islands in the South China Sea even after a close collision with China’s People’s Liberation Army Navy last month near one of the China-controlled outposts in the Spratly Islands.

“In this area of the world, just as we have been present here for the past seven decades, we will continue to be present and continue to advocate for freedom of navigation through international waters. This is an important part of the global commons,” US Navy chief of naval operations Adm. John Richardson told reporters in a press briefing on Monday.

“We will continue to progress this program of freedom of navigation operations and this is a worldwide program, so it’s important to consider that we did dozens of these operations around the world to indicate our positions for sort of illegitimate claims, maritime claims. So there are times when they are inconsistent with international law, we do dozens around the world. Last year, we did them against 22 nations including some of our allies,” he said.

Part of Richardson’s visit to the Philippines is a stopover at the Western Command in Palawan, the unit in charge of securing the Philippines’ claims in the West Philippine Sea.

In September, the US Navy destroyer USS Decatur had to maneuver to avoid ramming a Luyang-class guided-missile destroyer that came at a very close distance of 45 yards of its bow in Gaven Reef (Burgos Reef) in the Spratly Islands.

The US vessel was conducting a freedom of navigation of operation (FONOP) and was sailing within 12 nautical miles of the China-held outpost.

The incident appeared to be the closest encounter of the naval vessels of the two superpowers.

The US is not the only naval power conducting FONOPs in the hotly contested waters. British and French vessels have also conducted FONOPs this year to challenge China’s expanding military presence in the South China Sea.

Despite the close encounter, the Navy official said the two nations are both signatories to the Code for Unplanned Encounters at Sea, which requires them to behave with cautiousness to avoid miscalculations.

“It’s maybe helpful to understand that there is an operational construct that we use between our two navies, it’s called CUES, the code for unplanned encounters at sea. It is a methodology agreed to by both navies whereby when we encounter each other on the high seas that we behave in predictable ways to avoid any kind of tactical miscalculation that may quickly escalate to something,” he said.

“So I continue to communicate with my counterpart in the People’s Liberation Army Navy. We continue to stress the importance of these types of arrangements to make sure that things don’t escalate unnecessarily to something that neither one of us wants,” he added.

Richardson said the same thing on their recent show of force in the Taiwan Strait, where two US vessels sailed near Eluanbi amid tensions between Taiwan and China.

“Like so many other areas in this region of the world and in the South China Sea, there are parts of the Taiwan Strait that are international waters, they are accessible to all…they are part of the global commons which is the foundation for free navigation,” he said.

Read Next
No Filipinos onboard crashed Lion Air plane – DFA
EDITORS' PICK
DOH: Too early to say COVID-19 cases are declining
Duterte praises military but slams police for poor discipline, corruption
Acer starts the year off strong with the Aspire Vero National Geographic Edition
The best of bayside and city living at SMDC’s Sail Residences
COVID-19 cases surging in all regions and provinces, says DOH
Over 3 Million worth of prizes to be won at Smart Padala’s SENDali Manalo Promo!
MOST READ
PBA gets crucial call from GAB for go signal under different setup as reboot of Governors’ Cup could come earlier
Marcos Jr. visits Cebu, stands as ‘ninong’ to mayor’s son
Djokovic has to comply with rules to go to Spain, PM says
Comelec is confident candidates will join debates, says spox
Don't miss out on the latest news and information.