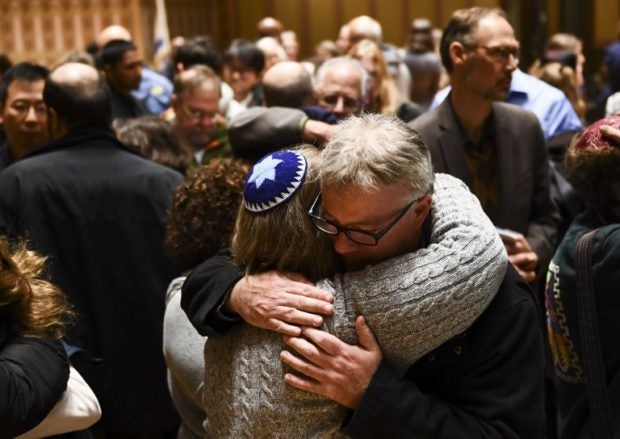 People hug after a vigil, to remember the victims of the shooting at the Tree of Life synagogue the day before, at the Allegheny County Soldiers Memorial on October 28, 2018, in Pittsburgh, Pennsylvania. AFP

No Filipinos were reported hurt in the shooting at a synagogue in Pittsburgh, Pennsylvania, that killed 11, the Department of Foreign Affairs (DFA) said.

Consul General Claro Cristobal of the Philippine Consulate General in New York said in a statement that about 4,000 Filipinos are in Pittsburgh and the rest of Western Pennsylvania.

The DFA then extended its condolences to the bereaved families and hopes for the speedy recovery of those injured.

“The Department of Foreign Affairs (DFA) expresses its sympathies to the families of the 11 individuals killed in the shooting incident at a synagogue in Pittsburgh, Pennsylvania, on Saturday,” DFA said.

“The Department also hopes for the speedy recovery of the six other individuals reported injured after a 46-year-old gunman opened fire inside the Tree of Life Congregation Synagogue in Pittsburgh,” it added.

Pope Francis has also extended his sympathies as he denounced the “inhuman act of violence.” /cbb