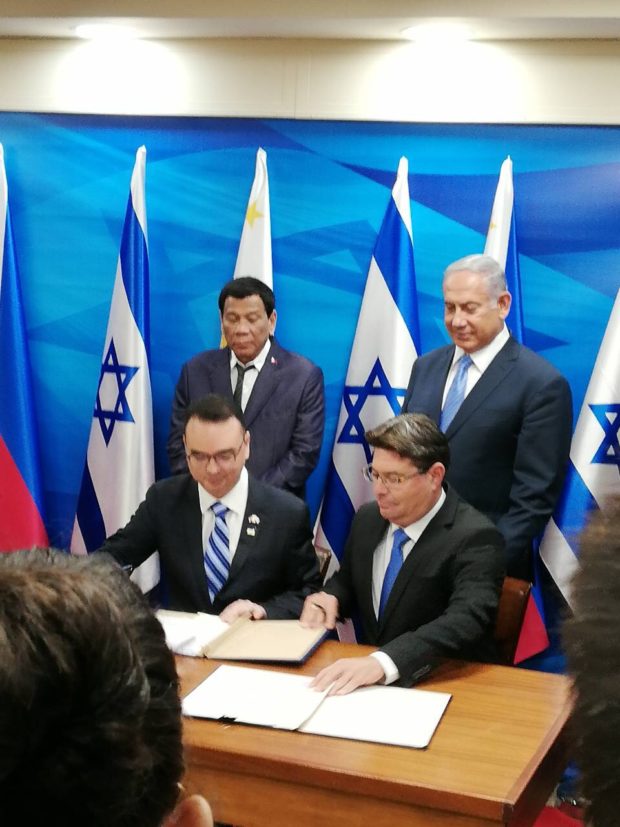 President Duterte meets with Israeli Prime Minister Benjamin Netanyahu at the Prime Minsiter’s Office in Jerusalem on September 3, 2018. The two leaders witness the signing of deals on labor, science and technology and trade. MALACAÑANG PHOTOS

Netanyahu extended a warm welcome to Mr. Duterte at the start of the Philippine President’s official visit.

“We remember our friends and that friendship has blossomed over the years and especially over the last few years,” Netanyahu told Duterte.

Duterte said “Israel can expect any help that the Philippines can extend.”

The two leaders witnessed the signing of three agreements: Memorandum of Agreement on the Temporary Employment of Home-Based Filipino Caregivers, Memorandum of Understanding on Scientific Cooperation, and Memorandum of Intent on the Collaboration on Promotion of Bilateral Direct Investment.

Duterte has been accused of condoning human rights abuses in his deadly drug crackdown and has made controversial comments about the Holocaust. He drew outrage in 2016 when he compared his anti-drug campaign to the Nazi genocide of Jews in World War II and said he would be “happy to slaughter” 3 million addicts. He later apologized.

Netanyahu hailed the service of Filipino caregivers given to Israeli families.

“I am one of those families. My great father received incredible care by [Filipino] caregivers.

He described his father’s caregiver as “a woman of exceptional compassion and intelligence and took care of my father’s every need.”

Netanyahu said he was “deeply moved” by the care of Filipino workers.

Nathaniel Imperial, Philippine Ambassador to Israel, said the bilateral labor agreement for caregivers would “ensure that the exploitative placement fees that are being charged to our workers would be substantially reduced, if not, eliminated.”

Netanyahu gave details of the agreement.

“And today, we’re gonna sign an agreement that would knock off as much as 12,000 dollars in the cost of every caregivers. This is good money that is taken away from the caregivers and the families, the Israeli families they so long deserve. This is an exceptional agreement,” Netanyahu told Duterte.  AP /kga