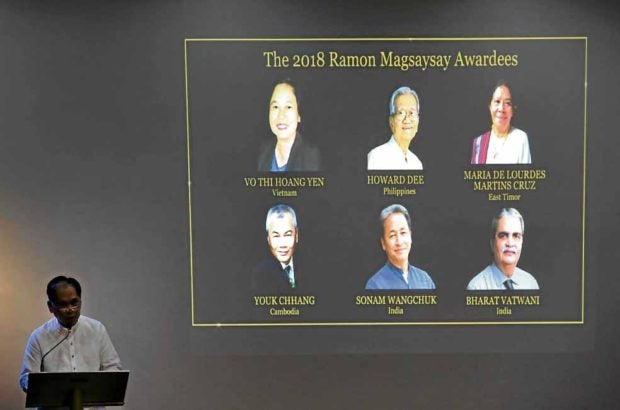 Former Philippine envoy and government peace panel chair Howard Dee was named one of this year’s six recipients of the Ramon Magsaysay Award, considered the Asian equivalent of the Nobel Prize.

Dee, who served five Presidents from 1986 to 2015, will receive the award on Ramon Magsaysay Award Foundation’s 60th anniversary for “championing the human face of peace, justice and economic growth,” the RMAF said on Wednesday.

The awardees offered a “defiant declaration of hope” in Asia, which has been roiled by a populist wave and widespread discontent, like other continents, said RMAF president Carmencita Abella.

“All have refused to give up, despite meager resources, daunting adversity and strong opposition. Their approaches are all deeply anchored on a respect for human dignity,” Abella added.

The RMAF said “no one private citizen has been as directly engaged in addressing” indigenous people’s rights, social justice and peace building in the Philippines as Dee.

Dee, 87, served as ambassador to the Holy See and Malta under President Corazon Aquino and as the government’s chief negotiator in peace talks with communist rebels from 1993 to 1998 under then President Fidel V. Ramos.

He was also former President Gloria Macapagal-Arroyo’s adviser on indigenous people’s affairs and was appointed in 2015 by then President Benigno Aquino III to the Bangsamoro Basic Law Peace Council.

A 1951 business administration graduate of University of the East, Dee quickly climbed the corporate ladder and rose to become president of local pharmaceutical company United Laboratories in 1965.

In 1970, he helped establish the Philippine Business for Social Progress, a consortium in which member companies gave 2 percent of their profits to social development.

After the declaration of martial law in 1972, however, Dee had a “crisis of conscience” and abandoned his business career to form the Assisi Development Foundation (ADF), named after Saint Francis, who renounced wealth to serve the poor.

The ADF has assisted 10.5 million Filipinos, including those displaced by the armed conflict in Mindanao, indigenous peoples and Filipinos deported from Sabah.

The RMAF board of trustees said it recognized Dee’s “quietly heroic half-century of service to the Filipino people, his abiding dedication to the pursuit of social justice and peace in achieving dignity and progress for the poor, and his being, by his deeds, a true servant of his faith.”

The Ramon Magsaysay Award has been conferred on more than 300 public servants and community leaders since 1957, the year President Ramon Magsaysay died in a plane crash.

This year’s winners will officially receive the award on Aug. 31 at the Cultural Center of the Philippines in Pasay City.

DOF chief: If SC finds violations by ABS-CBN, then Duterte right in upholding the law