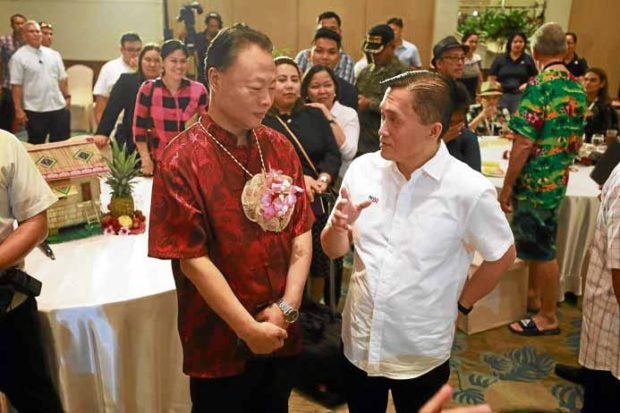 DAVAO CITY — China’s ambassador to the Philippines gave assurance on Wednesday that there was nothing sinister about the calls of Chinese military air and sea craft in Davao City in recent weeks, saying the stopovers were properly coordinated with Philippine authorities.

“We do that in accordance with requirements for approval by the department concerned in the Philippines. So the plane landing in Davao, the ship’s visit to Davao are all permitted by the Philippine authorities,” Zhao told reporters on the sidelines of the Asia-Pacific Healthy Islands Conference at a local hotel.

He said the two planes of the People’s Liberation Army Air Force and the research ship were in Davao “due to technical issues.”

“It’s convenient for them to stop here, instead of stopping in any other ports or airports in the Philippines,” he said.

Zhao also announced the opening of a Chinese consular office in Davao City.

He said the consulate, located in a former boutique hotel on Acacia Street at Juna Subdivision in Ecoland Village, was “officially opened” in April.

Malaysia, Indonesia and Japan also have consulates in Davao City.

The multistory building where the Chinese Consulate is located stands close to two Catholic schools and to President Duterte’s favorite pub.

With the opening of the Chinese Consulate, local businessmen say they expect an influx of Chinese traders and tourists to Davao.

Businessman Sebastian Angliongto said the opening of the consulate augured well for more cooperation between Davao and Chinese businessmen.

The calls of Chinese military craft in President Duterte’s hometown have stirred speculation about the extent of Beijing’s militarization of the South China Sea.

Zhao, however, said the Chinese planes and surveillance vessel would not have called in Davao without permission from Philippine authorities.

He said the calls were made “without any special considerations.”

The ambassador also played down suggestions Davao City was chosen for the calls because it was Mr. Duterte’s hometown.

“Just simply because of technical reasons,” Zhao said, without elaborating.

He said he had been to Davao nearly 20 times “simply because it’s your President’s hometown.”

Zhao also deemed “wise” President Duterte’s statement to a joint session of Congress on Monday  praising the Philippines’ improved relations with China but stressing his administration would not back down in defending the country’s interests in the South China Sea.

“We do have differences with the South China Sea issue, but we have to put it in proper perspective,” he said.

“What really matters to Sino-Philippine relations is traditional friendship and more importantly pragmatic cooperation that will bring benefits to the Filipino people and the Chinese people,” he said.