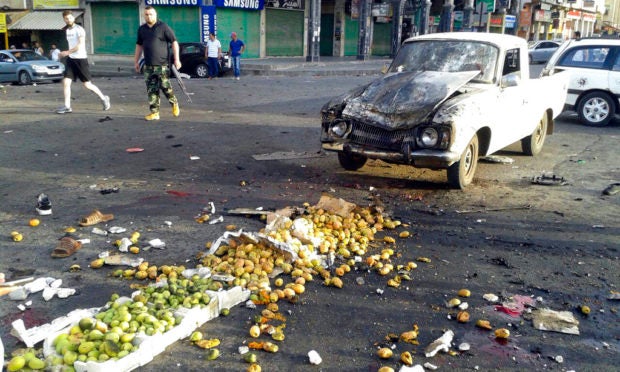 In this photo released by the Syrian official news agency SANA, Syrians inspect the site of a suicide attack in Sweida, Syria, Wednesday, July 25, 2018. Syrian state media say dozens of people have been killed in a suicide attack in the country’s south, blaming the bombing on Islamic State militants. (SANA via AP)

The Department of Foreign Affairs (DFA) on Friday advised Filipinos living in Syria to take necessary precautions after Islamic militants massacred more than 200 people in a series of attacks in the southern part of the country.

While there are no Filipinos reported among the casualties, the Philippine Embassy in Damascus said it remains ready to assist and repatriate any of the estimated 1,000 Filipinos who are still in Syria.

The Philippines, through the DFA, also extended its condolences to Syria following the coordinated attacks by militants of the Islamic State in the province of Sweida.

“We grieve with the families of the more than 200 people who lost their lives in the latest acts of terror by the Islamic State,” Foreign Affairs Secretary Alan Peter Cayetano said in a statement.

According to the DFA the Philippine Embassy in Damascus has reported that at least 150 other people were wounded but no Filipinos were among the casualties.

Chargè d’Affaires Alex Lamadrid said the Embassy was in touch with two Filipino women in Sweida who are married to Syrian nationals. Both reported that they and their children were safe.

“We again call on our remaining kababayan in Syria to be vigilant and to take the necessary precautions to ensure their safety and security,” Lamadrid said.  /muf