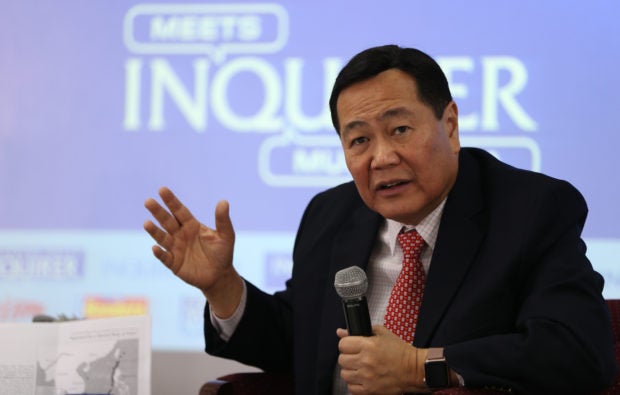 Acting Chief Justice Antonio Carpio has challenged the youth to join other Filipinos in doing their “solemn civic duty to preserve, protect and defend” Philippine territory and sovereignty.

“We must always be on guard and resist any and all attempts to weaken the nation in defending our national territory and maritime zones,” Carpio said in a speech to graduating students of the University of the Philippines’ National College of Public Administration and Governance in Diliman, Quezon City, on Friday.

One of the “ideas that divide the nation,” Carpio said, is President Rodrigo Duterte’s constant warning that fighting for the country’s sovereignty in the West Philippine Sea will only lead to a war with China.

Carpio reiterated that the United Nations had recognized arbitration as one of the peaceful means in resolving territorial disputes between nations.

Not a hostile act

“Seeking arbitration is never a hostile act,” he said.

“Not a single right-thinking Filipino asserting our sovereign rights in the West Philippine Sea has called for war against China,” he added.

West Philippine Sea is the local name of the waters within the Philippines’ 370-kilometer exclusive economic zone (EEZ) in the South China Sea.

China is claiming nearly all of the South China Sea, including waters close to the shores of the Philipines and the other Southeast Asian claimants in the strategic waterway—Brunei, Malaysia and Vietnam.

Vietnam has fought naval battles with China over their territorial dispute in the East Sea, Vietnam’s EEZ in the South China Sea, but the Philippines does not have Vietnam’s military muscle to defend its claims in its own EEZ.

That being the case, the President prefers engaging China diplomatically to asserting the Philippines’ victory in its challenge to China’s sweeping claim in the Permanent Court of Arbitration in The Hague.

The tribunal, in its 2016 ruling, declared China’s claim invalid under international law and upheld the Philippines’ sovereign right to fish and explore for resources in its EEZ.

The President has said asserting that right will only lead to war with China and he does not want to go to a war that he cannot win.

According to Carpio, it is “utterly false to claim that war with China is the necessary consequence of asserting our sovereign rights in the West Philippine Sea.”

“War, as a means of enforcing the arbitral ruling, is simply a preposterous idea,” he said. “What our national leaders should never do is to mindlessly divide the nation, like claiming that there will be war if we seek to enforce the arbitral ruling.”

Carpio has consistently championed the country’s fight for control over the West Philippine Sea. He has repeatedly challenged the President’s China policy.

A member of the legal team that successfully argued the Philippine case in the Hague court, Carpio again lamented how the President had chosen to accept loans and investment commitments from Beijing in exchange for temporarily abandoning the arbitral ruling.

‘Beyond any monetary value’

“We all know that the fish, oil, gas and other mineral resources… in the West Philippine Sea are worth far more than whatever loans and investments that can come from China,” he said.

“Besides, the country’s national territory and maritime zones, involving sovereignty and sovereign rights, are beyond any monetary value,” he added.

Carpio said the Philippines may also sign a sea boundary agreement with Vietnam regarding the two countries’ “overlapping extended continental shelves beyond the Spratlys.”

He said such arrangements were possible since the arbitral tribunal declared that “there is no geologic feature in the Spratlys that can generate an exclusive economic zone.”