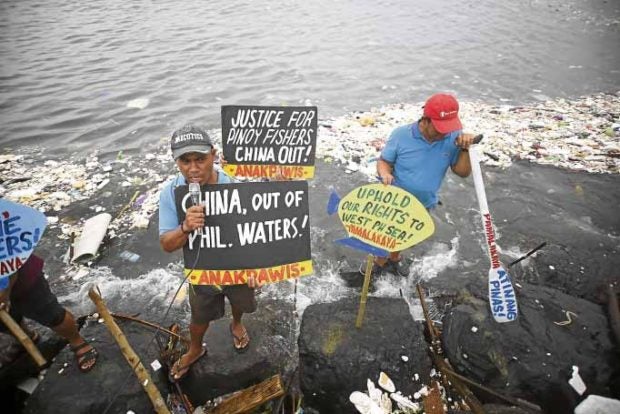 The Philippines may lose its legal right to Panatag Shoal if it accepts China’s line that it allows Filipinos to fish there “out of goodwill,” acting Chief Justice Antonio Carpio said on Thursday.

Speaking in an interview on CNN Philippines, Carpio said China’s goodwill was “immaterial,” as the UN-backed Permanent Court of Arbitration in The Hague ruled in 2016 that Panatag Shoal — known internationally as Scarborough Shoal — was a common fishing ground for the Philippines, China and Vietnam.

Commenting on a controversy involving Filipino fishermen and Chinese coast guards, Geng Shuang, spokesperson for China’s foreign ministry, earlier told reporters in Beijing that China had been allowing Filipinos to fish at Panatag “out of goodwill.”

“Whether it’s goodwill or not, it is immaterial because the tribunal said it is a common fishing ground,” said Carpio, a member of the government legal team that argued and won the Philippines’ challenge to China’s claim to nearly all of the South China Sea in The Hague court.

“I’m worried. If we accept their narrative, we will be giving up the legal right to be there,” he said.

Carpio earlier said the Philippines should take China back to The Hague court for violating the UN Convention on the Law of the Sea with the destruction of coral reefs at Panatag.

“The Philippines should demand damages from China for the destruction of the coral reefs by Chinese fishermen in harvesting the giant clams,” he said in a statement on Tuesday.

But presidential spokesperson Harry Roque said on Wednesday that the Duterte administration would rather discuss the coral destruction with China than file a case that would only “reverse our diplomatic gains.”

“We know it’s still happening now, but it’s a dog-and-cat-chase situation. The Chinese and Philippine authorities are going after those doing that,” Cayetano told reporters.

Reports of the coral destruction followed a controversy involving the confiscation of Filipino fishermen’s catch by Chinese coast guards at Panatag Shoal.

President Duterte spoke to Chinese Ambassador Zhao Jianhua about the matter on Tuesday and the diplomat told reporters later that Beijing was investigating and would punish errant coast guards.

Cayetano earlier belied claims of harassment of Filipino fishermen, saying what was going on at Panatag was barter trade—the fishermen exchanging their fish for some goods carried by the Chinese coast guards.

But television images of Chinese coast guards boarding Filipino fishing boats, opening the iceboxes, and leaving with the best fish do not support Cayetano’s explanation.

Commodore Nichols Driz, commander of Naval Forces Northern Luzon, on Thursday suggested that language barrier could be the reason the Chinese coast guards could not understand the Filipino fishermen’s refusal to give up their catch.

“I hope you could exert efforts to learn to do sign language so you can tell the Chinese coast guards when to stop. Don’t just stand there and watch them,” Driz said at a meeting with complaining fishermen in Iba, Zambales province.

Mayor Arsenia Lim of Masinloc, Zambales, was in Malacañang on Thursday and in a talk with reporters described the confiscation of catch as a “toll” imposed by Chinese coast guards on Filipinos so that they could fish at Panatag.

“We should not ask China for consent to fish there and the position of Masinloc is that our fishermen have the right to live and fish there,” Lim said.

Lim and her vice mayor, Daddy Enciso, traveled to Manila to ask President Duterte to help solve the Masinloc fishermen’s problem at Panatag.

Sen. Richard Gordon stepped into the controversy on Thursday, blasting China and urging the government to tell the Chinese that the Philippines would not be bullied at Panatag Shoal.

“The fishermen are not threats. That is an unfriendly act to Asia. You are not a reliable ally or a friend. We are not enemies of China but you are treating us as if we are interlopers in our own country,” Gordon said in a statement. — REPORTS FROM JULIUS N. LEONEN, DONA Z. PAZZIBUGAN, LEILA B. SALAVERRIA, CHRISTINE O. AVENDAÑO, AND ALLAN MACATUNO