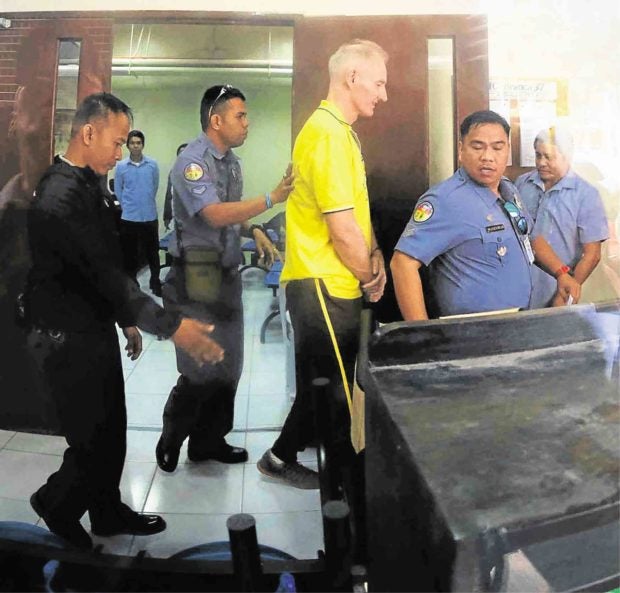 CONVICTED Australian Peter Gerard Scully (center) is escorted by policemen out of a courtroom in Cagayan de Oro City after his conviction for trafficking.—JIGGER JERUSALEM

CAGAYAN DE ORO CITY — An Australian who ran an international cyberpornography trade was sentenced by a local court to life imprisonment for forcing children to perform sexual acts and for torturing them while filming their ordeal.

He was also given an additional six years to nine years and 11 months in jail for five counts of rape by sexual abuse.

Escobido gave credence to the testimonies of two victims who escaped from Scully’s rented house here in 2014.

“This sends a strong message to the public in general that our laws do not look kindly on human traffickers,” she told the Inquirer.

“There’s no let up in our campaign to prevent, if not eliminate, human trafficking in all regions in the country,” she said.

Scully did not issue any statement after the court handed its decision.

He and another partner, Liezyl Margallo, are facing at least 50 other qualified trafficking cases in Cagayan de Oro and Surigao cities and the Bukidnon province.

Scully, Margallo, and Alvarez reportedly conspired in enticing poor children to go with them.

A video footage provided by the Dutch police showed a naked 1-year-old girl who was hung upside down with her hands tied and legs drawn apart.

The girl, known in the footage as “Daisy,” was crying nonstop while being tortured and sexually assaulted by a masked older girl later identified as Margallo.

The footage, described by the NBI as the “worst video” they had seen in their years of campaign against child pornography, used at least nine children, including a 12-year-old girl, whose remains were exhumed in Scully’s apartment at Villa Corito in Surigao City.

Uy said the two victims, aged 10 and 13, gave a detailed narration of the ordeal they suffered under the hands of Scully when they were detained in the foreigner’s house in Cagayan de Oro from Sept. 19 to 23 in 2014.

Scully was arrested by NBI agents at Malaybalay City in Bukidnon in February 2015.