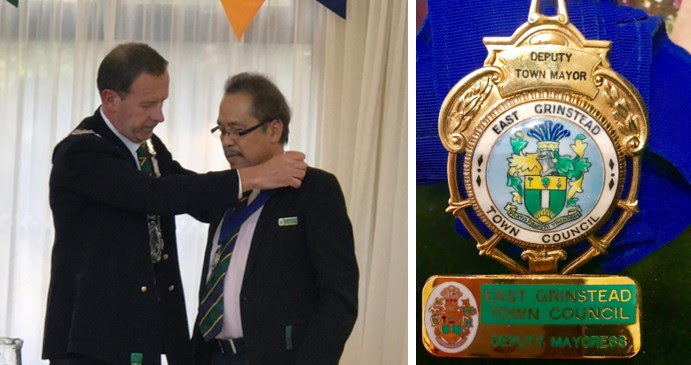 East Grinstead Town Mayor Rex Whittaker puts the medal on Deputy Mayor Danilo Favor at ceremonies held during a session of the Town Council. Courtesy of Philippine Embassy in London.

A Presidential awardee was elected deputy mayor in England, becoming the first Filipino to win an elective post in the United Kingdom.

Favor, who was conferred with Presidential Award for outstanding overseas Filipino in 2014, is an ophthalmic nurse practitioner at the Queen Victoria Hospital NHS Foundation Trust.

A member of the Conservative Party, Favor was first elected East Grinstead Town Councilor in 2011, making him the first Filipino to hold elective office in the UK. He was re-elected in 2015 for a second term.

On May 14, members of the town council elected him as deputy mayor.

“He is the first Filipino to hold this elective post,” said Ambassador Antonio Manuel R. Lagdameo as he congratulated Favor.

Favor has lived in East Grinstead for 15 years and has received the Community Service Award in 2014 from Mid-Sussex District Council for his active contribution in the community.

According to the embassy, he is the incumbent president of Bicol United, the umbrella organization of various Bicolano communities in the United Kingdom.

Favor graduated in the Philippines with a nursing degree and continued his ophthalmology nurse specialist studies at King’s College, London. /vvp