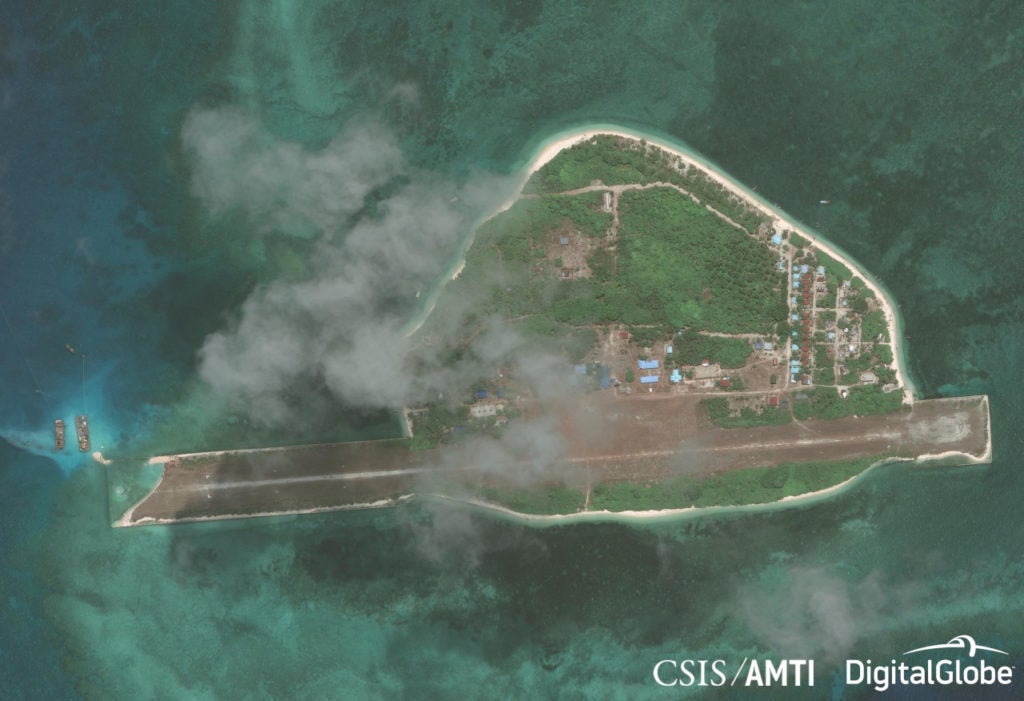 The Philippines has finally started the long overdue repairs for the runway on Pagasa Island (Thitu) in the West Philippine Sea (South China Sea).

“It appears that a grab dredger, consisting of a crane with a clamshell bucket, is installed on the smaller barge to the west, while the other carries a backhoe. Loose sediment from dredging can be seen in the water around the two barges and freshly-deposited sand is visible along the northern edge of the runway,” Amti said.

The think tank said that this method of dredging is similar to what Vietnam has been doing at some of its outposts.

“While still harmful to the marine environment, it affects surrounding reefs at a smaller scale and is far less environmentally destructive than the suction cutter dredging undertaken by China, which destroyed thousands of acres of reef from late 2013 to early 2017,” it said.

In April 2017, the Philippine government announced that it will repair the runway on Pagasa and construct a beach ramp or a port to allow ships to bring in construction materials for the building and repair of facilities.

Repairs of the eroded airstrip have been stalled for a long time over fears of China’s reaction. The previous administration had alloted P1.6 billion for the long-delayed upgrades.

Pagasa is the biggest of the nine Philippine-occupied islands in the Spratlys, inhabited by about a hundred civilians and a small batch of troops.

It features an eroded 1.3-kilometer coral airstrip built in the 1970s which has become risky for landing big planes. Amti said the airstrip’s real size is closer to 1.2-km due to the collapse of the western portion of the runway. The Philippines was the first to build a runway among claimants in the Spratlys.

A Philippine Air Force pilot earlier told the Inquirer that there were instances tires of military planes blew out from intense braking due to the shortness of the runway.

The airstrip also becomes too soft to land on whenever it rains and pilots have to wait for at least three days before they can use it again.

Early this month, the Inquirer published a few close-up photos that showed that the Philippines is lagging behind compared to its neighbors in fortifying its outposts in the Spratlys. But all efforts of Southeast Asian claimants still pale in comparison to China’s sprawling military outposts.

An analysis of Amti’s recent satellite images from February 2017 also shows minor upgrades to Pagasa Island and three other outposts in the past year.

“At least seven new buildings have been constructed in the last year, with four near the residential area on the eastern side of (Pagasa) island, one near the administrative facilities at its center, another along the northern shore, and one at the western end next to the island’s basketball court, which has received a fresh coat of paint,” the Amti said.

In Rizal Reef (Commodore),  a new round-roofed shelter has been constructed on the eastern side of the outpost.

Amti also noted that an empty field in Lawak Island (Nanshan) has been converted into a helipad as of Feb. 20 this year. In Panata Island (Loaita Cay), a new hexagonal shelter was spotted from a May 17 satellite image.

A former commander of the Palawan-based Western Command (Wescom), which oversees the West Philippine Sea, lamented how the Philippines has lagged behind its neighbors in maintaining its outposts in the Spratlys.

“We are far behind. (Our neighbors) have piers and they have long runways similar to international airports. At night we have no lights while theirs is like Makati,”  said the former commander, who spoke to the Inquirer in the condition of anonymity late this week.

He said his proposals of major repairs and improvements of the Philippines’ outposts in the Spratlys have been thumbed down several times over fears of reaction from China.

“As a former Wescom commander, I feel our efforts defending, preserving our territorial integrity became useless….We stood our ground and we were aggressive then. David against Goliath, we saw that they hesitated in bullying us because if they did, they knew we were willing to sacrifice our lives. They also knew the international repercussion if they did massacre us. The whole allied nations will gang up on them. They will lose. All we need is to show them we have balls!” he said.

Despite criticisms for not protesting China’s recent activities in the South China Sea, President Rodrigo Duterte has been firm that he will not contest the Asian giant because he claims he cannot afford to go to war, as if it were the only option. He has also repeatedly blamed the Aquino administration and the United States for failing to stop China in building its artificial outposts in recent years.

Duterte also chose to put aside the favorable arbitral ruling that invalidated China’s massive claims in the disputed seas, in favor of economic and investment opportunities.

As to the growing call for protests on the recent developments in the contested waterway, the government maintained that it’s not part of its policy to publicize its actions it had made through diplomatic channels.

But the former Wescom commander said that China will not risk starting an armed confrontation and the Philippines should also assert the UN-backed ruling.

“We could have taken advantage of our victory at the international tribunal and demanded a stop to their incursions. The bigger allied nations were fully behind us. Any hostile act against our forces will be reciprocated by international sanctions and China knows this. We should also show resistance though this will be a big sacrifice. We lost at psywar (psychological warfare),” the former Wescom commander said.

“China won’t wallop our islands just like that because other countries will respond. And the U.S. cannot be blamed for failing to stop China’s massive building because we are talking about our own backyard. Are we going to ask them to fight for us?…When you get into a fight, your friends will come to your rescue but don’t expect them to start the fight. If you look at the Mutual Defense Treaty, our ally will only come in when we are attacked but they won’t start the fight for us,” he added.

The former Wescom commander also refuted the President’s claim that war is the only option to settle the dispute: “There are diplomatic means. You can also boost your defenses to show the aggressor that you are willing to put up a fight. Even if you are at a disadvantage, you will face them head on. It’s called patriotism.”

“When our soldiers are deployed to our islands, they already know what they’ve signed up for. They do it anyway because it’s part of their duty….But it’s not only our soldiers who have a duty to defend our country at all costs but all Filipinos,” he said.

“Without any resistance, we are giving up…By mere protesting and showing ourselves up, we are preventing them to have full control. If China could feel at least a pinch from us that’s enough already. We should also show them we’re resisting and we’re not giving up just like that,” he added.       /muf