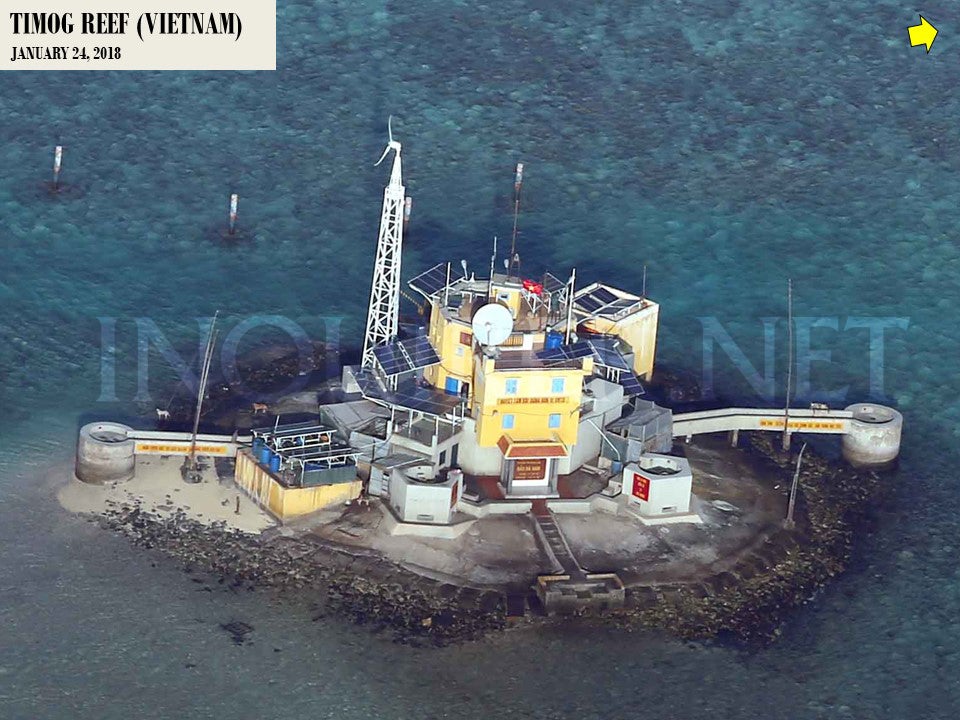 As China steps up the transformation of seven reefs in the Spratly archipelago into sprawling military outposts, other claimants have also strengthened their stakes in the South China Sea, except the Philippines, which has been left behind in developing territories it occupies in the heavily contested waterway.

According to the Washington-based Asia Maritime Transparency Initiative, Vietnam has the most number of outposts in the Spratlys, with 49 or 51 spread across 27 islands.

Malaysia occupies five islands in the archipelago, while Taiwan occupies just one island, Itu Aba, but it is the largest natural feature in the Spratlys.

Only Brunei does not maintain a military presence in the area.

They are located in waters within the country’s 370-kilometer exclusive economic zone (EEZ), an area Filipinos refer to as the West Philippine Sea.

The South China Sea is crisscrossed by vital sea-lanes through which $5 trillion in global trade passes annually.

In the Spratly archipelago, islets, reefs and atolls are believed to be sitting atop vast energy reserves.

Former Kalayaan Mayor Eugenio Bito-onon Jr. told the Inquirer that the Aquino administration deferred the improvement of structures on Philippine-occupied islands in the Spratlys to maintain its “moral high ground” when it filed a challenge to China’s claim to nearly all of the South China Sea in the Permanent Court of Arbitration in The Hague in 2013. 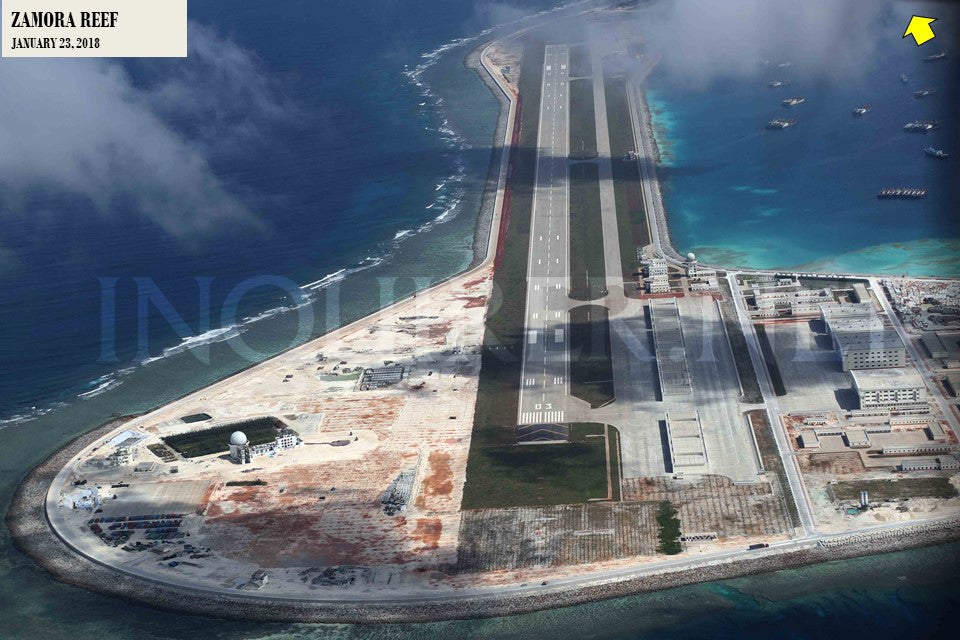 “They said back then that the case must be first resolved before a major improvement or development could be made in the detachments,” Bito-onon said.

About two weeks after President Duterte assumed office in 2016, the arbitral court ruled that China’s claim was invalid.

China has ignored the ruling and the Duterte administration, preferring loans and aid from China, has not done anything about significantly strengthening the Philippine outposts in the Spratlys.

Mr. Duterte is facing criticisms for putting aside the ruling in exchange for economic assistance from China. He has argued that the alternative is war, which the Philippines cannot wage because it is no match for China.

The biggest of the Philippine-held islands is Pag-asa (international name: Thitu Island), which is inhabited by about a hundred civilians and a small military garrison.

Residents on the 37-hectare island receive free basic supplies from the government every month in exchange for staying there to maintain Philippine sovereignty.

Vietnam, Malaysia and Taiwan also maintain civilian communities in the Spratly archipelago on some of their occupied features, but with better living standards compared to Pag-asa.

In April last year, officials and military top brass led by Defense Secretary Delfin Lorenzana visited the island to check the facilities in dire need of repair, including the eroded 1.3-km airstrip that has become risky for landing big military planes. The Duterte administration has set aside P1.6 billion for the development of the island. 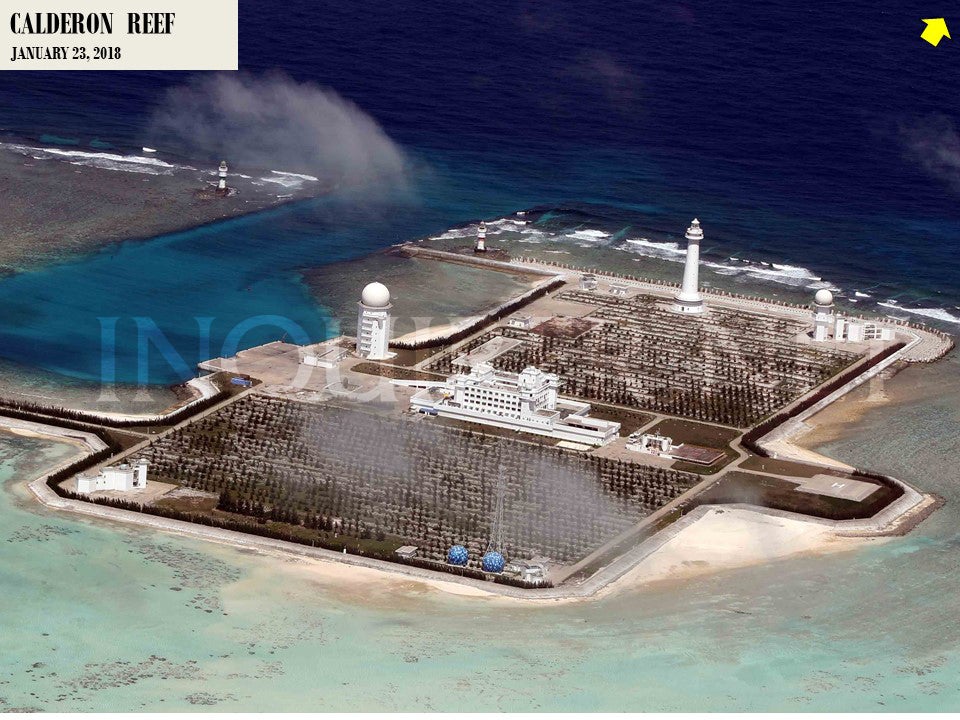 A Philippine Air Force pilot, who has flown to Pag-asa several times in recent months, said it was “challenging” to land planes on the island due to the shortness of the airstrip there.

“The runway is short and it’s just enough to land planes,” the pilot, speaking on condition of anonymity, told the Inquirer.

The pilot said the airstrip, paved with corals, had been sturdy for decades. But the unpaved runway, dotted with clumps of grass, needs to be extended and thoroughly improved so all types of aircraft could land safely in any weather.

The runway becomes too soft for planes to land on whenever it rains. Pilots have to wait for the runway to dry for at least three days before they can use it again.

The pilot also cited instances when the tires of medium-lift cargo planes like the Fokker blew out from intense braking during landing due to the shortness of the coral runway. 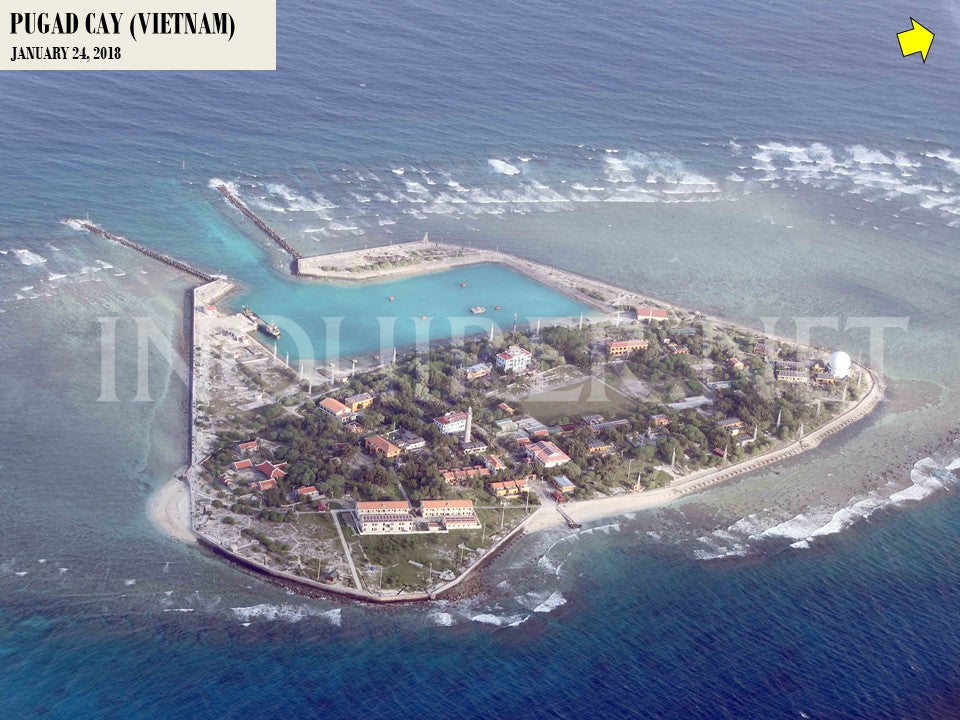 Ironically, the Philippines was the first of the claimant countries to build an airstrip in the Spratlys in the 1970s. The other claimants only followed suit.

China started to build 3-km airstrips that could accommodate huge military aircraft on three artificial islands it had built on Philippine-claimed reefs in 2014, including Panganiban Reef (Mischief Reef), which is located within the Philippines’ EEZ.

The Duterte administration last year announced plans for the construction of a beach ramp or a port on Pag-asa Island to enable ships to deliver construction materials for the building and repair of facilities. One year later, work on the ramp or the upgrades has yet to begin.

A port is crucial, as large vessels have to anchor as far as 7 km away from the shore because of the absence of a dock. Smaller boats are used to unload people and goods on the island.

Recent statements from the Duterte administration indicate that the development of Philippine-occupied parts of the Spratlys is not a priority for now.

“If you look, it’s only in the Philippines who is not building up our defenses on the features we hold. Why? We’d rather spend our money on education or health,” Foreign Secretary Alan Peter Cayetano told Filipino reporters in Hong Kong after attending the Boao Forum for Asia in Hainan, China, last month.

That is why the Philippines has done little, if at all, in developing its outposts in the Spratlys compared to its rivals. While it keeps single-story buildings, storage tanks and solar panels in most of its detachments, the facilities are in need of long overdue major improvements.

Its outpost on Ayungin (Second Thomas) Shoal is the BRP Sierra Madre, a rusting World War II hospital ship grounded there by the Philippine Navy in 1999 to mark the country’s boundary in the Spratlys after China seized Panganiban (Mischief) in 1995. 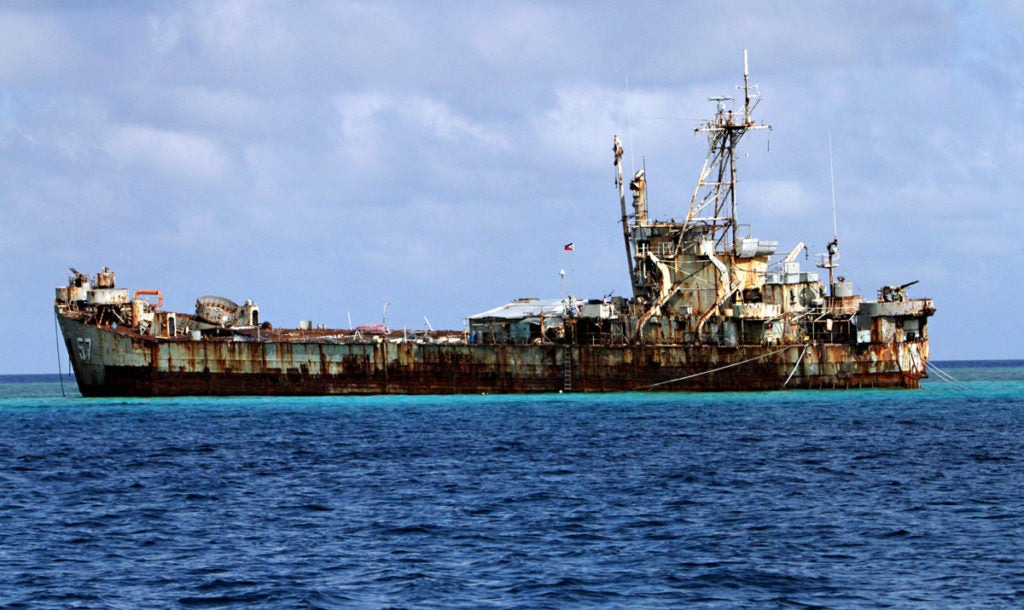 A small Marine garrison, serving on rotation, guards Philippine territory from the deck of the decrepit vessel.

“The Philippines exercises a form of self-restraint in allowing some of its facilities to fall into disrepair and in not undertaking new construction to keep China from exerting diplomatic pressure,” said Carlyle Thayer, a Southeast Asia security expert and professor emeritus at the University of New South Wales’ Australian Defense Force Academy.

But Thayer urged the Duterte administration to come up with a plan on what to do with the BRP Sierra Madre given its sorry state.

“The [ship] is decrepit. No action means that the Philippines will have to withdraw the Marine detachment eventually and China will assert control over this feature,” he said.

Most of Vietnam’s outposts in the Spratlys have gun emplacements, dish antennas, turbines, artillery, piers, light posts, bunkers and solar panels. Hanoi also offers tours of the outposts to boost its territorial claim in the South China Sea.

Malaysia, on the other hand, has turned one of its claims into a luxurious diving resort and at the same time a naval base.

Taiwan holds only Itu Aba, but the island has gun emplacements, a concrete runway and solar panels. 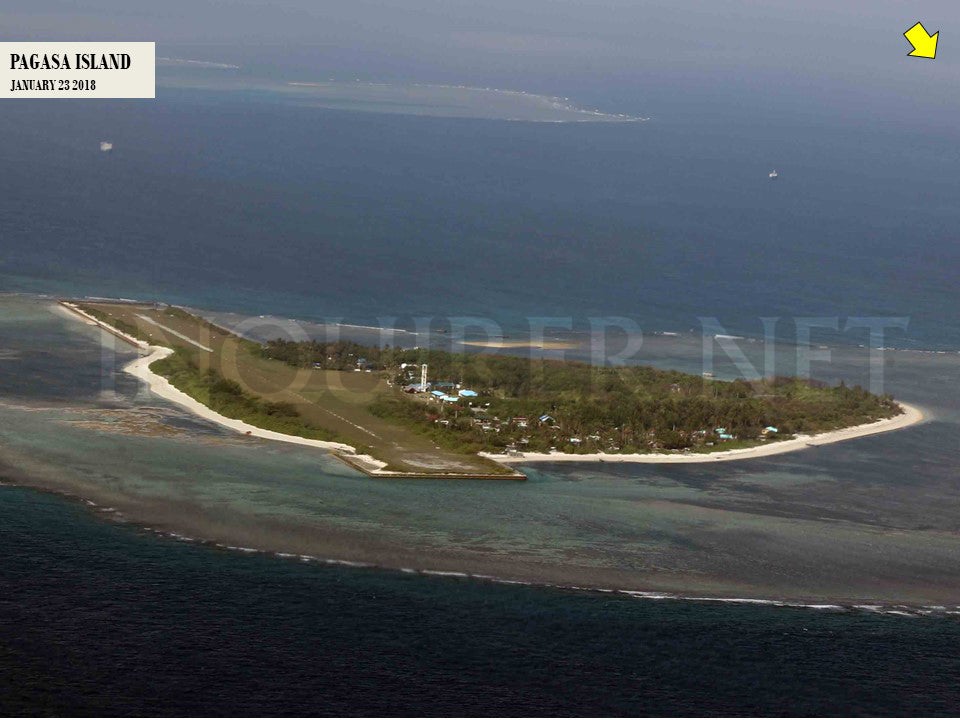 All these, however, pale in comparison to China’s massive bases on the artificial islands it has built on Philippine territory.

Alexander Neill, a senior fellow for Asia-Pacific security at the International Institute for Strategic Studies, said the SAMS would allow China to throw an air defense network over the islands and a decent swath of the South China Sea.

“The bases also serve as ‘eyes and ears’ for China, dramatically improving the People’s Liberation Army’s control in the region, as well as intelligence gathering,” he said.

Thayer said Vietnam, the most vocal in resisting China, had the most advanced political-military strategy in the sea dispute.

“This strategy encompassed diplomatic protests, public comments by foreign ministry spokesmen and joint statements with relevant countries like Japan, India and the United States. Vietnam supports a US naval presence and endorses US freedom of navigation patrols,” he added.

It also helped that Vietnam has undertaken a “robust modernization” of its military since the mid-1990s to present a credible deterrent to China. 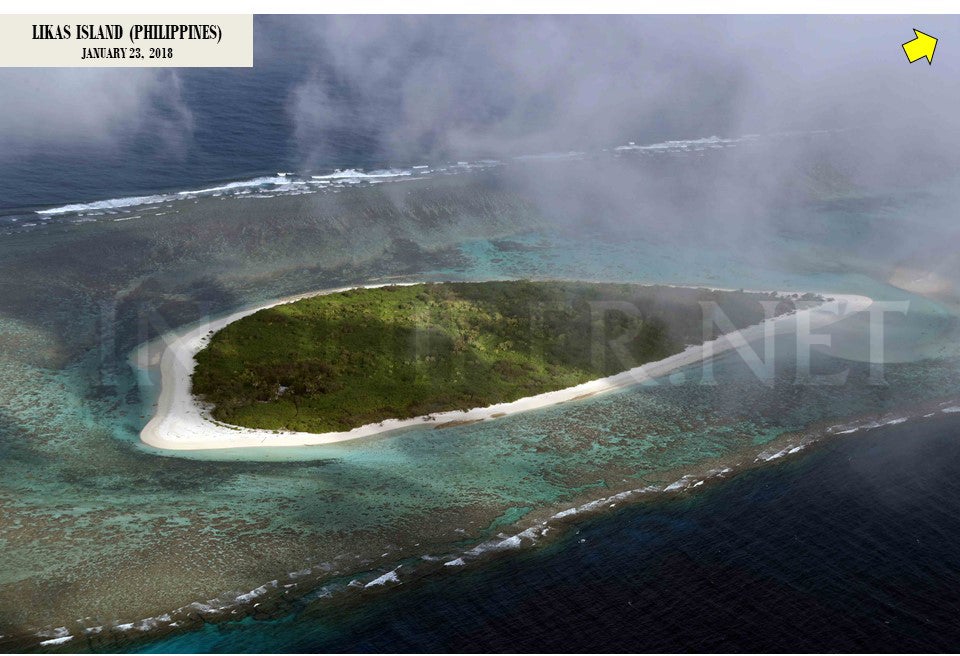 “Vietnam is well-versed in understanding China’s elastic limits and will stretch them when required. However, the scale and pace of China’s construction in the Spratlys has dwarfed Vietnam’s military capability to challenge these developments,” Neill said.

Thayer and Neill agree that the Philippines’ approach to the South China Sea dispute lacks direction.

“It is clear President Duterte is vocal about how the Philippines cannot stand up to China. Duterte depreciates the alliance with the United States… Philippine diplomacy does not seem to have a clear direction in this issue,” Thayer said.

“A strategic approach to this problem needs to be ‘joined up’ and this should consist of the development of a well-versed diplomatic and legal narrative [with support of key friends and allies] backed by a military capability,” Neill said.