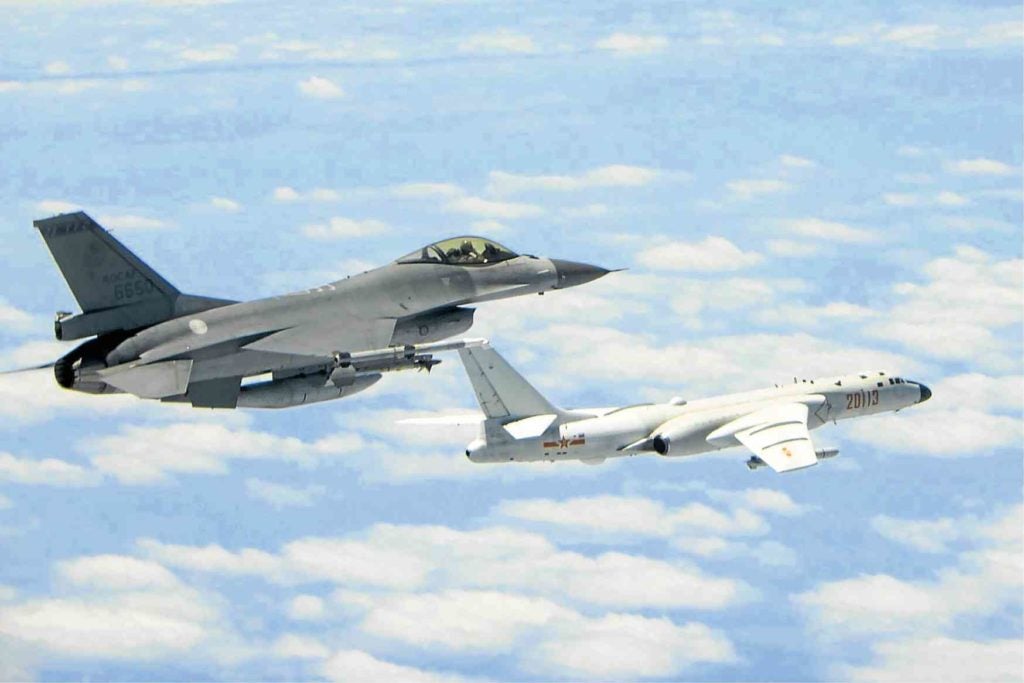 ARMS RACE In this photo released by Taiwan’s Ministry of National Defense on May 11, a Taiwanese Air Force fighter jet (left) flies near a Chinese People’s Liberation Army H-6K bomber that is flying over Luzon Strait. Taipei is building up its military capability in the air, land and sea in the face of China’s threats. —AP

Senior government officials met with the commander of the US forces in the Pacific on Friday to explain the Duterte administration’s “deliberate and nuanced” diplomatic strategy in the territorial row with China that had secured “clear economic gains for the Philippines.”

The Filipino officials, led by Executive Secretary Salvador Medialdea, sat down with Adm. Harry Harris Jr., chief of the US Pacific Command (Pacom), in Honolulu, the Department of Foreign Affairs (DFA) said on Sunday.

The meeting came amid reports that China had deployed nuclear strike-capable bomber planes on a disputed island in the South China Sea.

Pacom has the command and control of all US military units in the Indo-Pacific region, including the US Pacific Fleet and the US Special Operations Command Pacific. It is believed to have 375,000 personnel.

Despite President Duterte’s  public remarks denouncing Washington’s expressions of concern over human rights in the Philippines and his preference for Beijing as an ally, the United States remains the Philippines’ biggest military ally.

In a statement, the DFA said the Philippines and the United States both “reaffirmed their firm resolve to bolster their enduring alliance anchored on common values and interest, historic ties and the Mutual Defense Treaty” during the meeting.

“The Philippine delegation had a very substantive exchange with Admiral Harris on regional challenges and both sides agreed that the alliance remains consequential to the preservation of regional stability and development,” the DFA said without providing details.

“On the South China Sea (issue), the Philippine delegation underscored that the deliberate and nuanced diplomacy by the Duterte administration had lowered tensions in the region and resulted in clear economic gains for the Philippines in terms of access to marine resources, protection of the marine ecology, and the potential to explore oil and gas resources,” it said.

On its website, Pacom said the US and Philippine officials reiterated “their countries’ commitments to their shared interests and to each other, as longstanding friends, partners and allies in the Indo-Pacific region.”

According to the DFA, Harris lauded the Philippines for its handling of the attack of Islamic State group-linked local terrorists on Marawi City last year.

“The Philippine delegation expressed gratitude for Washington’s strong support in this effort, which was instrumental in the successful [military] campaign,” it said.

“Both sides agreed on the need to work more closely together, including in the exchange of information, in the fight against terrorism and in countering violent extremism,” it added.

Harris, US President Donald Trump’s nominee to be the next American ambassador to South Korea, has been awarded with the Legion of Honor, the order of defense merit of the Philippines, for his efforts to improve the defense cooperation between Washington and Manila.