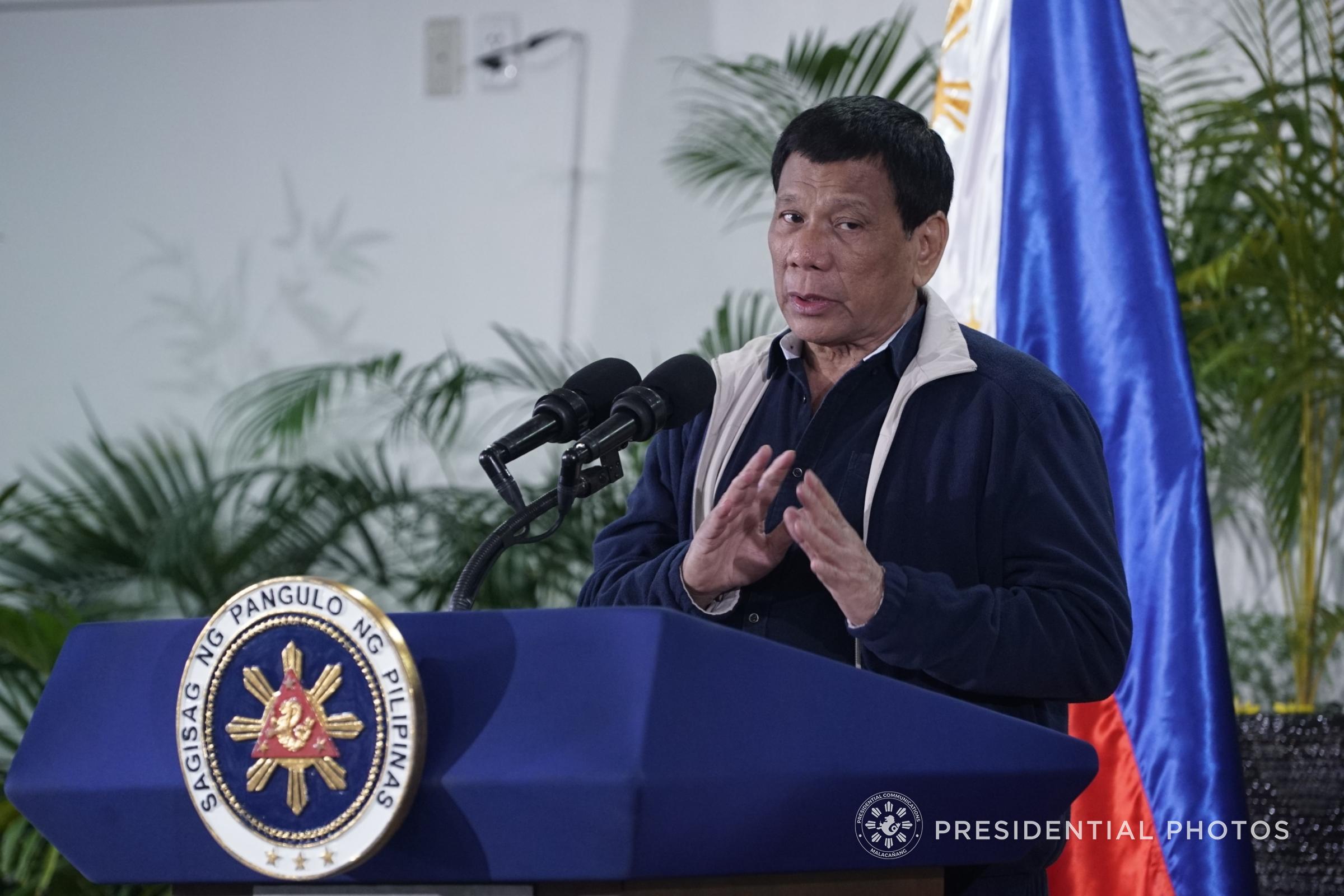 ABOARD BRP DAVAO DEL SUR–President Rodrigo Duterte said the Philippines is not giving up its rights in the West Philippine Sea amid recent reports of China’s missile deployment and militarization in the disputed sea.

President Duterte acknowledged that the West Philippine Sea has been “eaten slowly” by the expansive claims of China.

“I have nothing against China but China claimed the entire ocean of China Sea,” he said in a speech on Tuesday on board BRP Davao del Sur in Casiguran Bay, Aurora to send-off 50 Filipino scientist to the Philippine Rise, formerly Benham Rise.

The President said China “have claimed entire ownership, proprietary in nature” of the South China Sea.

President Duterte portrayed helpless with the agressive militarization and reclamation of Beijing in the disputed territory.

“When China claimed the entire ocean as theirs, eh wala akong magawa, wala tayong magawa eh ‘yan ang gusto niya [there is nothing I can do, there is nothing we can do since that is what they want],” he said.

He then shifted the blame to his predecessor, former President Benigno Aquino III.

“From the time the arbitration award was handed down to the time that he was nearing his end, there was sufficient time for him to act and do something,” he said.

But contrary to President Duterte’s claim, the United Nation’s arbitral ruling was only awarded on July 12, 2016, days after he assumed the presidency.

While China’s reclamation started during the past administrations, he admitted that Beijing’s island-building was in full swing during his term.

“There was a reclamation being done but wala naman tayong nagawa at hindi ko man panahon [we have done nothing since it was not under my term]. ‘Yung panahon ko na, bumuwelo nang husto [During my time, it has gone full swing],” he said.

The chief executive said he was willing to fight for our rights in the West Philippine Sea but thought twice of our chances of winning a war against China.

READ: ‘We have not surrendered our title’ in West PH Sea – Palace

“Before I went to China, so sabi ko, well, I’m ready to fight. But is it a battle that I can win?” he said.

He reiterated that he told Chinese President Xi Jinping during one of their bilateral meetings that he would insist on the Hague ruling during his term but not for now.

“Though I am not insisting on its solution now, I’d like you to know that I am going to China Sea to claim part of our territory and I will dig oil,” he recalled telling Xi.

But Presdient Duterte said Xi told him not to ruin the warming of ties between Manla and Beijing, which was strained duting the past administration due to our maritime dispute.

“Well, we just restored our relationships. I think it’s a new era for us, a new day and if I may beg you not to bring this up forcefully because there will be a time that we will be discussing it,” Duterte recalled Xi telling him.

President Duterte said he agrees not to raise the issue for now but told Xi that he would insist in the Hague ruling “at least during my term.”

“Pero nagpipilit ako sabi ko, whatever is in the bowels the Earth is ours over there because that is our territory,” he said.

Despite reports of Beijing’s missile installations and the presence of Chinese military planes in Philippine-claimed reefs, Duterte was silent to these recent developments during his speech. /jpv