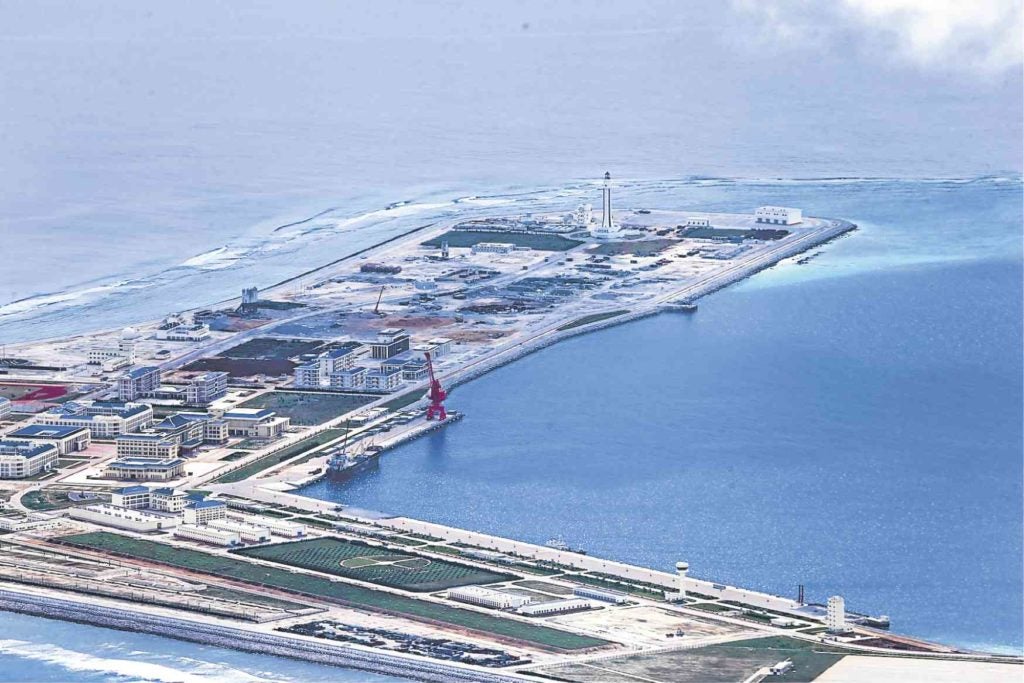 The United States on Thursday reiterated the importance of keeping a presence in the region amid China’s increasing militarization of the South China Sea, where Chinese forces recently installed antiship cruise missiles and surface-to-air missile systems (SAMS) on three Philippine-claimed reefs in the hotly contested waterway.

Kim spoke a day after the US network CNBC, citing sources with direct knowledge of US intelligence reports, said China had deployed antiship missiles and SAMS on Kagitingan, Zamora and Panganiban, three of seven Philippine-claimed reefs that China had seized and transformed into artificial islands.

The three reefs are internationally known as Fiery Cross, Subi and Mischief reefs, respectively, and they are among the marine features in the Spratly archipelago that are disputed by China and the Philippines and three other Southeast Asian nations—Brunei, Malaysia and Vietnam.

Taiwan, like China, claims all of the Spratlys, an archipelago of about 100 islets, reefs and atolls in the middle of the South China Sea.

The installation of the missiles, if confirmed, would mark the first Chinese missile deployments in the Spratlys.

At a regular press briefing on Thursday, Chinese foreign ministry spokesperson Hua Chunying neither confirmed nor denied the deployment.

“China’s peaceful construction in the Spratly archipelago, including the deployment of necessary national defense facilities, is aimed at protecting China’s sovereignty and security,” Hua said.

“Those who don’t intend to violate [this sovereignty] have no reason to worry,” she said.

Malacañang said it had no information about the missile deployment.

CNBC quoted unidentified sources as saying that according to US intelligence assessments, the missiles were moved to Kagitingan, Zamora and Panganiban reefs within the past 30 days.

The US defense department, which opposes China’s installation of military facilities on reefs in the South China Sea, declined comment.

Surveillance photographs published by the Inquirer on Feb. 5 showed that China had almost completed transforming seven Philippine-claimed reefs in the Spratlys into military outposts.

“I saw the report and [China’s action] seems to suggest that [it is] moving toward militarization,” Kim said.

Quoting sources from the Pentagon, the Wall Street Journal reported last month that  jamming equipment were deployed in the past 90 days on Kagitingan and Panganiban, a move seen as enforcing China’s claim to almost all of the South China Sea and a step further in its militarization of the region.

The Inquirer reported on April 18 that China landed two military transport planes on Panganiban in January.

“Precisely because we are concerned [over some of] the developments [in the] South China Sea, it’s very important for us to be present [there],” Kim said.

The United States, he said, continues to send its warships to the region “to display the nature of [its] relationship [with the Philippines] and [their] shared maritime concerns.”

Kim cited the recent visits to the region of the US aircraft carriers Carl Vinson and Theodore Roosevelt and the assault ship Bonhomme Richard as part of the US way of reassuring its Southeast Asian allies.

He said the warships’ visits demonstrated the US commitment to its alliance with the Philippines and its other allies in the region to protect the freedoms of navigation, overflight and commerce in the South China Sea.

“This is not only important for us but to everybody. So we will do whatever we can to protect these rights,” Kim said.

The United States takes no sides in the territorial disputes in the South China Sea, but has expressed interest in the peaceful settlement of the rival claims.

“We have consistently called on all claimants, including China, to refrain from unilateral aggressive actions that are inconsistent with the international law and norms, and we will continue to do so,” Kim said.

Greg Poling, a South China Sea expert at the think tank Center for Strategic and International Studies in Washington, said deploying missiles on the Spratly reefs would be important.

He said such deployments were expected as China built missile shelters on the reefs last year and already deployed such missile systems on Vietnam-claimed Woody Island in the Paracel archipelago farther to the north.

Poling said the missile deployment would be a major step on China’s road to dominating the South China Sea, a key global trade route.

“Before this, if you were one of the other claimants . . . you knew that China was monitoring your every move. Now you will know that you’re operating inside Chinese missile range. That’s a pretty strong, if implicit, threat,” he said.

It said the HQ-9B long-range SAM could target aircraft, drones and cruise missiles within 300 kilometers. — WITH REPORTS FROM JULIE M. AURELIO, AFP