US carrier sails in disputed sea as China shows own force 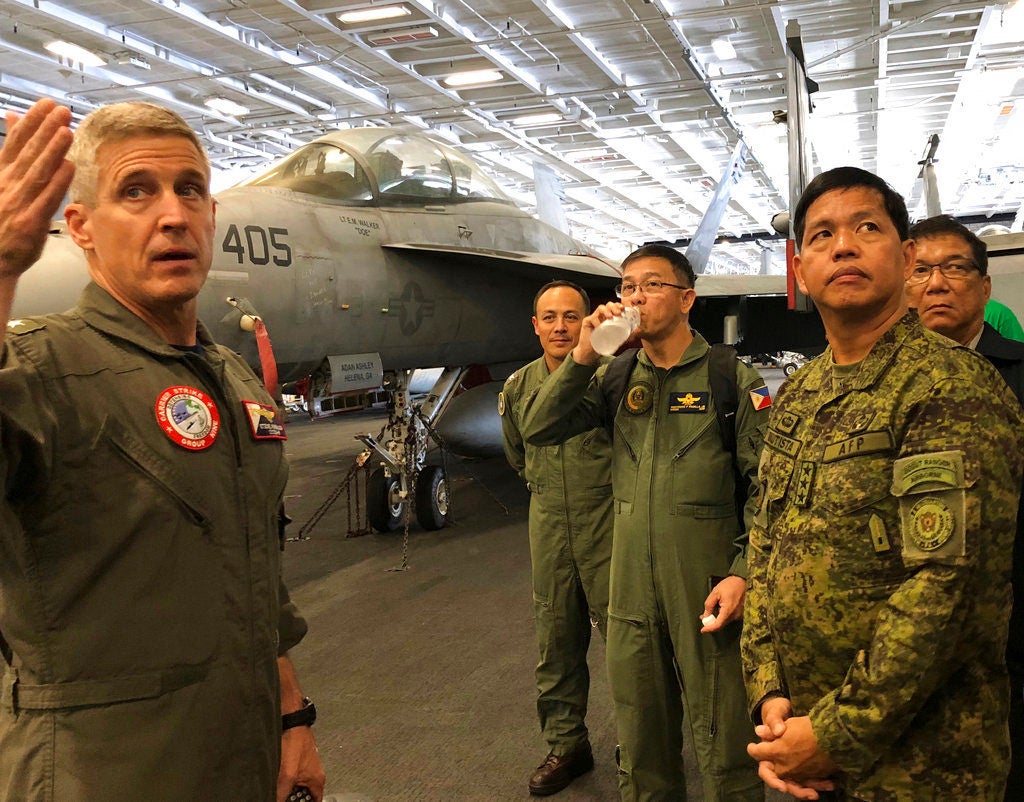 ABOARD THE USS THEODORE ROOSEVELT, South China Sea  — As fighter jets streaked overhead, a U.S. aircraft carrier sailed through the South China Sea on Tuesday in the latest display of America’s military might after China built a string of islands with military facilities to assert its claims in the strategic waters, sparking regional alarm.

The U.S. Navy flew a small group of Philippine generals, officials and journalists to the USS Theodore Roosevelt, where fighter jets landed and took off by catapult with thunderous blasts. The nuclear-powered carrier, and its 65 supersonic F18 jets, spy planes and helicopters, was en route to Manila.

Recent U.S. deployments of aircraft carriers, backed by destroyers, to perform freedom of navigation exercises to Beijing’s territorial claims are reassuring allies but also prompting concerns with China’s own show of force in the busy waterway.

“It’s a showcase of the capability of the U.S. armed forces not only by sea but also by air,” Philippine army Lt. Gen. Rolando Bautista said after joining a tour of the 97,000-ton carrier.

“The Americans are our friends. In one way or another, they can help us to deter any threat,” Bautista said, adding that the American military presence helps secure vulnerable Philippine waters.

At least twice this year, the U.S. Navy has deployed destroyers in freedom of navigation sail-bys near Chinese-occupied Scarborough Shoal, which Beijing wrestled from the Philippines in 2012, and Manila-claimed Mischief Reef, which Chinese forces occupied in 1995.

Another U.S. carrier, the USS Carl Vinson, patrolled the contested waters last month, taking part in anti-submarine drills in the South China Sea with Japanese forces and visiting Vietnam with its 5,000-strong crew, the largest such U.S. military presence there since the Vietnam War ended in 1975.

China has protested those moves, calling it U.S. meddling in an Asian conflict, and renewed warnings to Washington to stay away. Beijing has also reportedly been holding large-scale naval exercises in the area featuring its only operating aircraft carrier, while its air force says it recently sent some of its most advanced fighters and bombers for “joint combat patrols” over the sea.

Those included H-6K long-range strategic bombers that carry DH-20 long-range land-attack cruise missiles, giving them the ability to hit targets as far away as Australia, along with Russian-made Su-35 fighters.

“What we see now is a show of force and a counter show of force in the South China Sea,” said Roilo Golez, a former Philippine national security adviser and congressman.

While the moves could increase the risks of miscalculation and accidental clashes, Washington’s superior naval power could serve as deterrence to Chinese aggression, Golez said.

The Philippine ambassador to Beijing, Chito Sta. Romana, recently warned that the risks of a miscalculation and armed conflict have risen in the disputed region with a militarily stronger China now able to challenge the U.S.

Sta. Romana compared the two powers to elephants fighting and trampling on the grass and said, “What we don’t want is for us to be the grass.”

Despite such fears and occasional exchanges of rhetoric, U.S. Rear Admiral Steve Koehler told reporters on board the Roosevelt that it has been smooth sailing so far, with U.S., Chinese and other forces engaging each other professionally.

“I haven’t seen any dangerous interaction,” Koehler said, adding that problems could be avoided “if all the navies are operating in accordance with the international norm and law.”

Washington stakes no claims in the territorial disputes but has declared that their peaceful resolution and the maintenance of freedom of navigation are in its national interest.