Filipino DH yelled at by Chinese woman in HK park: ‘You are just a helper, OK?’ 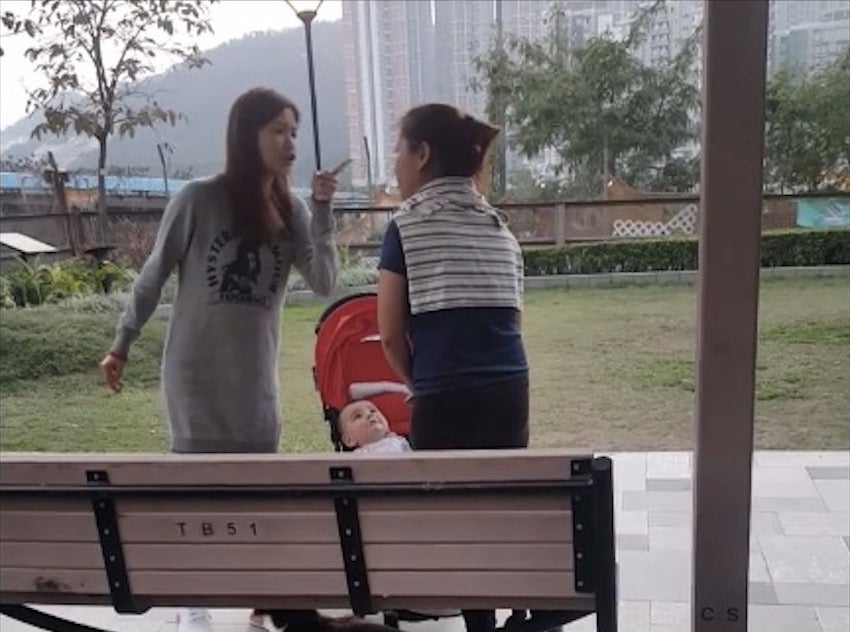 A Hong Kong resident has been filmed ranting and verbally abusing a Filipino domestic helper caring for a baby and two dogs.

The footage was shared in Facebook by a certain Mel C. Santiago and has since earned over one million views and over 16,000 shares as of this writing. According to Santiago, there was another local who filmed the incident, but they failed to get this passerby’s name.

In the video, the Chinese woman could be seen complaining that the dogs which the helper were looking after, kept barking at her dog. She questioned why the helper was walking the dogs with the child in the first place. This woman also claimed that one of the helper’s dogs bit hers, which the helper denied ever happening.

“Why you bring the baby together with the dog?!” yelled the woman. It can also be observed that throughout the woman’s yelling at the helper, she kept pointing her forefinger closely at the helper’s face.

The angry woman then demanded that the helper call her boss, which she did. After briefly talking, the helper then gave the woman her boss’ number and asked her to call him instead. This angered the Chinese woman further, who insisted that the boss come down to the park personally. “We are working! You call him!” responded the helper.

Later, a man in a black T-shirt, who appears to be the woman’s companion, tried to intervene and had a short exchange in Chinese with the angry woman. She then went back to the helper and yelled, “Go back to Philippines! Bad attitude, bad helper!”

During the latter part of the footage, the helper started to gather up the dogs and her things in preparation for leaving leave. Meanwhile, the Chinese woman continued her rant. The helper then said, “Thank you” before calmly insisting that the woman get her boss’ number.

Santiago said in a succeeding post that the helper’s name is MJ. Her bosses said the video has been shared to other Chinese nationals and even they condemned the angry woman’s attitude. MJ said her employers are good to her. They decided not to file a case this time, but should another incident happen, they would use the footage as evidence. JB

Filipino in Hong Kong dies after being hit by a car

Singaporean admits abusing maid, who escaped by climbing down from 15th-story balcony

Biden to Trump: ‘Will you shut up, man!’