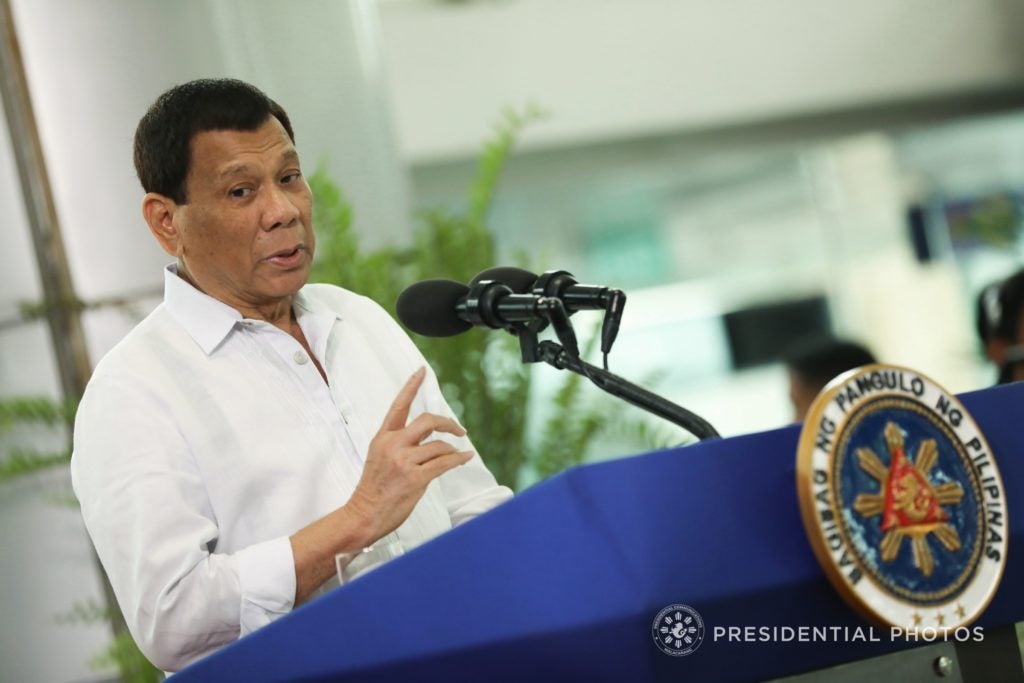 “The treaty, if you read it, it’s all bull[sh*t],” Duterte said in his speech here during the graduation of the Philippine Military Academy Alab Tala Class of 2018.

He urged member nations of the ICC to “get out” of the international court.

Duterte, in a statement on March 14, declared the Philippines’ withdrawal from the Rome Statute.

His rebuke of the ICC was his first public remark since he issued the statement.

“Ang sinabi ko lang ‘withdraw’ simply because to announce to the world and I will convince everybody now who are under the treaty sa ICC, get out, get out, bastos ‘yan,” he said.

(I said “withdraw” simply because to announce to the world and I will convince everybody now who are under the treaty of the ICC to get out, get out, they have no respect.)

Duterte reiterated that the ICC, who has initiated a preliminary examination over alleged human rights violations in the country, has no jurisdiction over him.

“You will never have jurisdiction over my person, not in a million years,” he said.

The President said the Rome Statute, the treaty adopted in 1998 which created the ICC, was a European Union-sponsored to atone for its “past sins.”

“It is not a document that was prepared by anybody, it’s EU-sponsored. Itong mga ‘to ‘nung pumunta sila Africa, pinagpapatay nila ‘yung mga Arabs, lahat na, dito ‘yung massacre sa Marawi (They are the ones who went to Africa, killing the Arabs, all of them, the massacre here in Marawi), it is really an atonement for their sins,” he said.

Duterte said the Philippines was not bound by the treaty because it was not published in the Official Gazette, the official publication of the government.

“Now our rule in this jurisdiction is you have to publish it so that people would not become ignorant. Because if it is not published, you cannot tell me now that ignorance of the law excuses no one. It has to be published in the Official Gazette. That is the publication of the government,” he said.

But legal experts have argued that the treaty does not need publication to take effect.

However, the Chief Executive maintained it should be published because it is “clearly a criminal law.”

“It is clearly a criminal law. If you read it, there is the commissioning of ICC, the judges, then there is the ICC prosecutors; and the definition of the crimes and the penalty attached to the crimes,” he said. “It must be published.” /je