Experts push for collaboration between nations, agencies to prevent another ‘Marawi siege’ 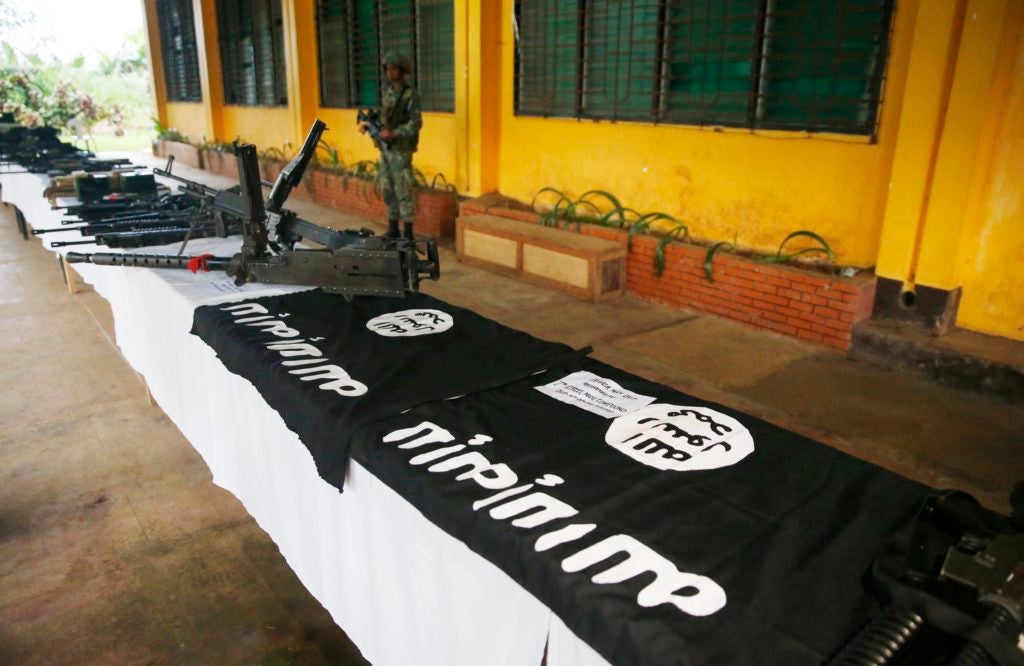 In this file photo, a Philippine Marine guards the display of high-powered firearms, ammunition, uniforms and black ISIS-style flags which were recovered from Muslim militants on May 30, 2017 in Marawi City, Mindanao. AP Photo/Bullit Marquez)

Security experts are pushing for a united stand between nations and local agencies to stem the  growing threat of violent extremism and prevent the eruption of another Marawi-like siege elsewhere in the world.

The five-month siege of Marawi City last year is the biggest security crisis to hit the Philippines in recent years.

“We are in a very critical phase in Marawi when it comes to countering violent extremism. The whole-of-government approach you are showing, it’s the right direction, perfect direction,” he said in an interview with reporters Friday.

The Marawi siege started on May 23 last year when government forces tried to serve a warrant for the arrest of Isnilon Hapilon, the touted leader of the Islamic State in Southeast Asia. But it later turned into a bloody battle between government forces and Islamic State (IS)-linked Maute fighters, prompting President Rodrigo Duterte to declare martial law in Mindanao on the same day.

The fighting lasted five months with at least 165 security forces, over 900 Maute fighters, and at least 45 civilians killed from the clashes. Marawi City was left in ruins with more than 300,000 people displaced. It was the country’s worst security crisis and the longest urban armed conflict in recent years.

The rehabilitation efforts of Marawi are currently ongoing, an effort of different government agencies, non-government organizations, and local government.

“You need to focus on Marawi. If you don’t manage to work together as a whole of government with the local government, it will open up for more people disenfranchised. Think of the internally displaced people in Marawi: If you are sitting there five years later you will become disenfranchised with what’s going on with your country. You may be vulnerable to potential radicalization,” he added.

The APCSS held its four-day workshop on countering violent extremism in Manila, which brought together experts from the military, foreign affairs, law enforcement from nine Asean countries, Bangladesh, New Zealand, Australia and the United States.

“The threat of violent extremism or radicalization has been around the world for many years, centuries I think…If you defeat violent extremism, that goes in Marawi, is that over? No, the question needs to be, ‘What happens to the radicalized groups that weren’t there before? Why is there a rise of radical ideas?’ I think the countries are asking the right questions so you can start addressing how you can approach it,” Gumataotao said.

He said the problem of violent extremism is too complex that it can’t be solved by a single solution and there is no “cookie-cutter approach.”

“A lot of what was discussed was how do we build resilience in Southeast Asia region…Marawi was a surprise so you have to learn how that did that come by…..What’s happening in [other countries] it could happen in your just country, it just hasn’t come around yet.. It’s a preventative way to be more resilient,” he also said.

Different nations shared their experiences and lessons in countering violent extremism during the workshop, with the Marawi siege in the Philippines cited as an example.

“I think they’ve realized that what you’ve faced in Marawi can happen to their own country. They are trying to understand how as a region can they share information around so we can make this a regional effort versus a country effort,” Gumataotao said.

Asean-member states are currently facing the challenge from ISIS foreign fighters returning to their home countries as they lose their foothold in the Middle East.

A Philippine military official who participated in the workshop echoed the need for nation-states to work together to “immunize” the nations against this growing threat.

“Extremism is not confined to one country alone since this is a matter that is cross border in nature already…Hence, high on the agenda is the need to share information on the movements of the terrorists across borders to stem tide,” the official said in the condition of anonymity for lack of authority to speak in public.

“The need for workshops like this is to ensure our security practitioners are kept abreast of best practices and our academics in the security sector stay a step ahead in the study, planning and preparation for hybrid threats that may be in the offing,” he said.

In a separate security conference held earlier this week, Dr. Rohan Gunaratna, head of the International Center for Political Violence and Terrorism in Singapore, stressed the importance for nation-states to shift from cooperation to collaboration in order to combat violent extremism.

“As long as we shift from cooperation collaboration, we can make sure the threat does not escape,” he said in Protect 2018: International Conference and Exhibits held on Tuesday.

He underscored the significance of stepping up intelligence-sharing to strengthen responses in times of crisis, and prevent incidents like Marawi from happening again.

“It’s like a jigsaw puzzle, everyone has to work together,” he said.

Sharing of resources and expertise are also important: “We have seen the best case in Marawi where US, China, Japan, Australia, New Zealand, and a number of regional countries came to work with Philippines.”

“I believe terrorist groups are cooperating and collaborating, and governments should also do the shift from cooperating to collaborating. If you don’t, the threat will persist,” Gunaratna said.   /muf