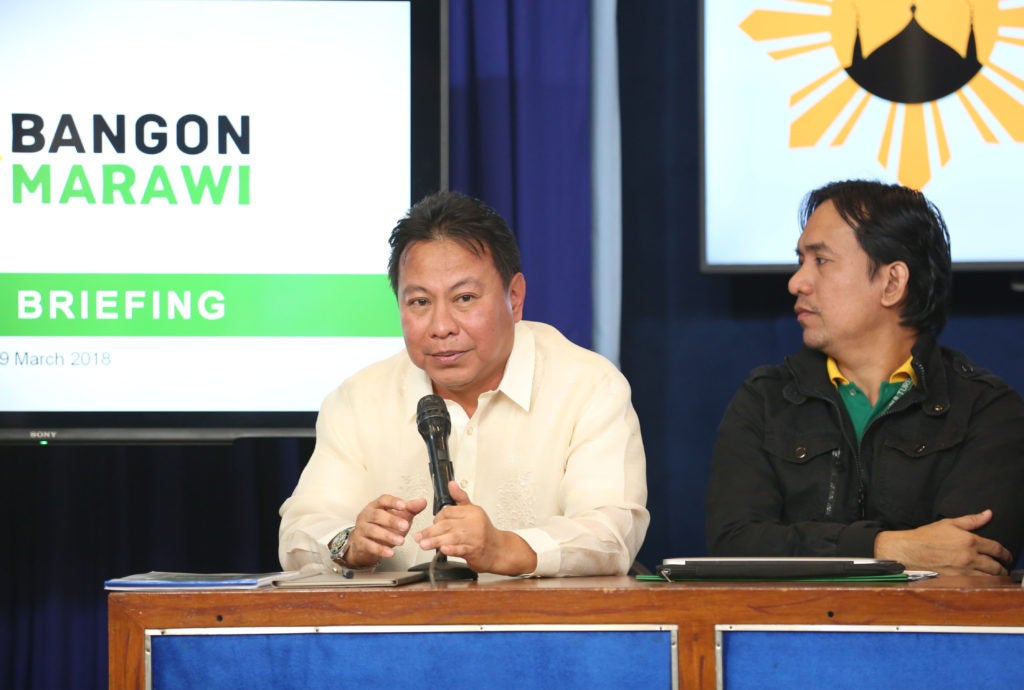 ROAD TO RECOVERY Public Works Undersecretary Emil Sadain (left) announces in a Malacañang press briefing that Marawi City would be made more accessible, thanks to the Japan International Cooperation Agency, which has pledged P1 billion for the construction of a major road in the city. With him is Department of Agriculture senior agriculturist Joselito Bernabe. —JOAN BONDOC

The Japan International Cooperation Agency (Jica) has pledged at least P1 billion for the construction of a major thoroughfare in Marawi City, according to Public Works Undersecretary Emil Sadain.

The P1 billion will fund portions of the 45-kilometer trans-central road that would make the city more accessible, Sadain said in a Palace press briefing.

He said the project would cost P2.5 billion to complete.

“The P1 billion, according to them, may just be the start, there might be a continuing tranche also in the succeeding years,” he said.

Jica and Asian Development Bank would help the rehabilitation of the greater Marawi area, which covers places outside the main battle zone, for a more comprehensive development, Sadain said.

“Because we saw the need for development plans, not only addressing the post-conflict needs assessment on infrastructure requirements, but also the development plans that would address basically the 72 barangays, outside of the 24 barangays covered by ground zero,” he said.

He also said the Japanese government was ready to provide 27 sets of equipment for the rehabilitation of the city. Mitsubishi will also turn over 26 vehicles.

The groundbreaking for the rehabilitation and reconstruction of Marawi City has been moved from April to May.

But Task Force Bangon Marawi spokesperson Toby Purisima said this was not a delay because in the original schedule, the groundbreaking was supposed to be held in late April or early May.

Purisima said officials were taking time to review the proposals submitted by developers who wanted to spearhead Marawi’s reconstruction.

“If ever the review is taking some time, it’s because we want to be thorough,” he said. “So we are still on target, there’s no significant delay.”

On Monday, the evaluations for the six proposals would be submitted to the Bangon Marawi Selection Committee.

Purisima said one of the developers would be selected and conferred the original proponent status, but this did not mean the contract would be awarded to it.

After the selection of the original proponent, this would be subject to a Swiss challenge, which could mean other developers not originally selected have a chance of bagging the project.

“We want to assure everyone that we will do this as

fast as we can. But we will do it in the right manner and following the right procedures,” he said.

Marawi City was devastated by five months of fighting between government forces and Islamic State supporters.

The city’s siege by the militants prompted the President to put the whole of Mindanao under martial law. The proclamation has been extended to last until December 2018.

Read Next
Duterte names Gibo’s wife Prieto-Teodoro as Unicef envoy
EDITORS' PICK
‘Justice will be done,’ Duterte assures as he vowed probe on Jolo incident to bare ‘truth’
Smart releases Hyun Bin’s second TVC
DOLE: Return of OFWs’ remains from Saudi to be ‘delayed,’ deadline moved to ‘early next week’
EuroMillions Superdraw: A lottery draw unlike any other is coming to the Philippines
Current dominant strain of COVID-19 more infectious than original—study
Water remains our saving grace right now
MOST READ
Locsin warns of ‘severest response’ if China’s army drills in SCS ‘spill over’ to PH domain
BREAKING: Duterte signs anti-terror bill into law
Duterte tells military: No other president looked at you the way I did
INQ animated bar graph: How severe is COVID-19 in Southeast Asia
Don't miss out on the latest news and information.