globalnation / Europe
Europe
UP FOR NEGOTIATION

EU continues aid to PH despite Duterte’s rebuke of bloc 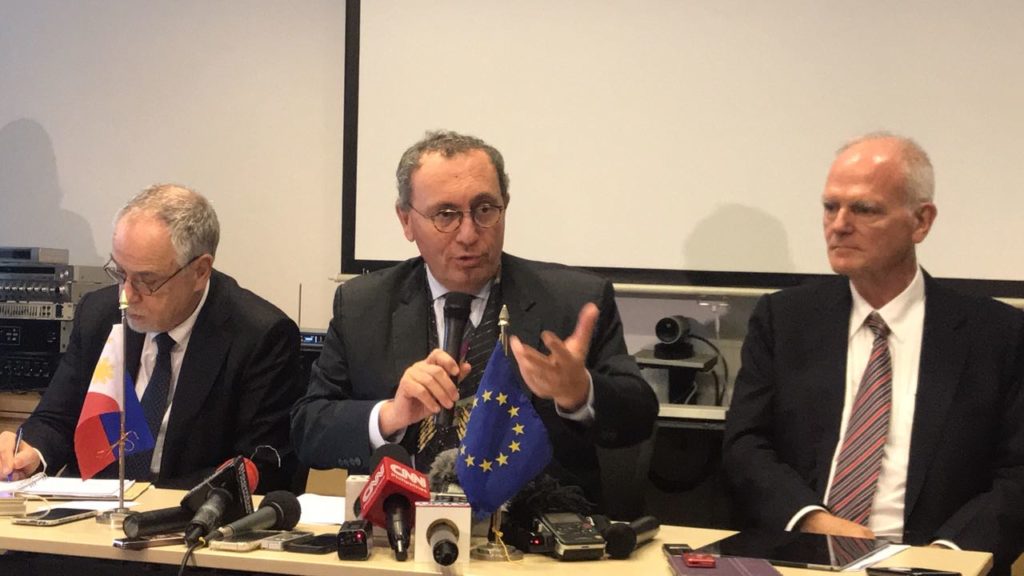 European Commission Director General for International Cooperation and Development Stefano Manservisi says European Union aid to the Philippines will “go on as it is.” Jhoanna Ballaran/INQUIRER.net

The European Union has earmarked 170 million euros for assistance to Mindanao and renewable energy development in the Philippines in the next few years despite President Duterte’s rebuke of the bloc for alleged interference in the country’s internal affairs.

Stefano Manservisi, director general of the European Commission’s Directorate General for International Cooperation and Development, said EU’s offer of assistance would be up for negotiation with the Philippine government.

“We have an ongoing commitment of 260 million euros. Some of them are actually contracted for implementation,” Manservisi said in a press briefing on Friday.

“What is next is 170 million euros which we together with the [Philippine] government have to decide what to do with focus on Mindanao and energy,” he added.

Manservisi said the 170-million-euro aid was the last component of a development package earmarked for 2014 to 2020.

The EU official’s visit came as the ratified EU-Philippines Partnership and Cooperation Agreement (PCA) came into force on March 1.

With such agreement, Manservisi said he was optimistic that both sides could sit down and discuss the future of development assistance. He said he had met with top government officials and the issue of human rights was not discussed.

“We discussed energy, Mindanao and the mutual interest that we have in the region and our common interest in doing cooperation in the Philippines,” Manservisi said.

Mr. Duterte had earlier rejected further assistance from the 28-nation bloc, complaining that the European Union was using aid to meddle in the country’s internal affairs. He had approved a finance department recommendation to stop accepting grants that carried conditions, especially on human rights.

The EU’s funding aid to the Philippines would continue despite “misunderstandings,” Economic Planning Secretary Ernesto Pernia said after a closed-door meeting with Manservisi.

“I will have to check but there may be a lot of aid packages,” he told reporters.

“It is precisely on this [that] we are advancing in order to finalize the text and to make it even clear in the light of the recently adopted PCA,” he said. —WITH A REPORT FROM REUTERS