US official reminds PH on rule of law | Global News

US official reminds PH on rule of law 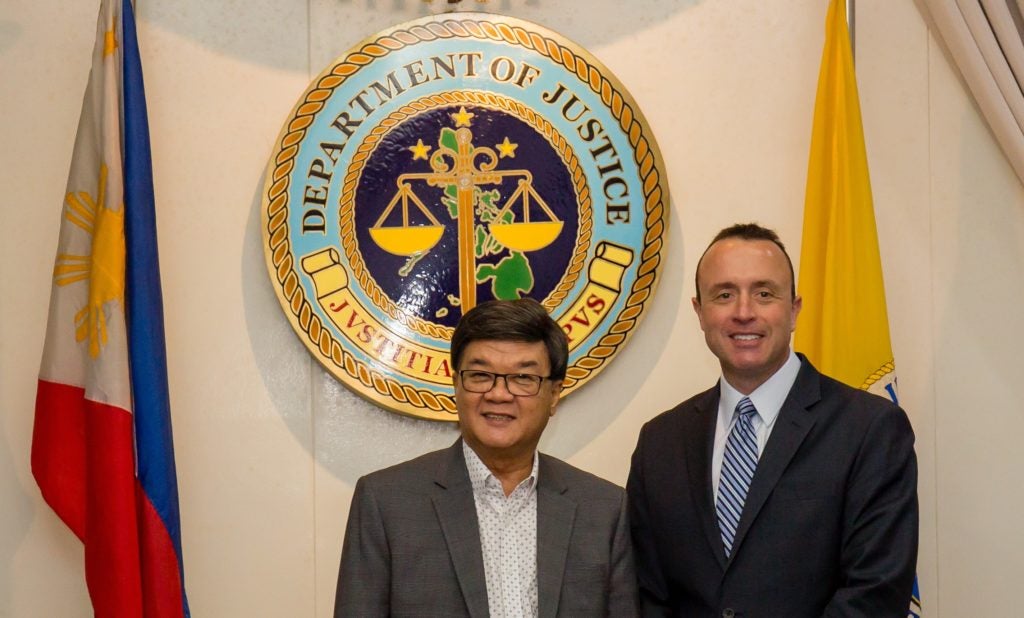 MANILA VISIT Undersecretary David Glawe of the US Department of Homeland Security and Justice Secretary Vitaliano Aguirre II discussed security issues during their Friday meeting at the US Embassy in Manila. —DHS PHOTO

A visiting ranking official of the US Department of Homeland Security (DHS) has reminded the Duterte administration that the rule of law should be the “benchmark” in enforcing the war on drugs in the Philippines or in any other country in the world.

Speaking with a select group of journalists on Friday, DHS Undersecretary David Glawe said he met with senior Philippine government officials, among them Justice Secretary Vitaliano Aguirre II, on his first diplomatic mission to Manila.

According to Glawe, he discussed with Aguirre a wide range of security issues, such as the global fight against terrorism, drug trafficking, child exploitation and other transnational crimes during his three-day stay.

“We did talk about the importance of the rule of law … The benchmark of the US law enforcement is the US Constitution,” Glawe said.

“When we partner with other countries, we also partner in [the implementation of the] rule of law and the humane treatment of people, and that’s the benchmark of the US law enforcement,” he added.

Although he declined to make an assessment of President Rodrigo Duterte’s bloody war on drugs, Glawe reiterated that Washington was “absolutely 100 percent for the rule law.”

“That means adhering to search warrants, arrest warrants and due process for people arrested,” he said.

Glawe, a former Houston police officer and special agent of the Federal Bureau of Investigation, underscored the importance of respecting the judicial process in stemming the scourge of illegal drugs and in tapping members of the communities, especially the school authorities.

Citing his years of experience in law enforcement, Glawe said simply “attacking the supply” side of the narcotics problem “without addressing the demand” portion of it would not be a successful tack.

“I understand the challenges [posed by] criminal organizations and narcotics trafficking. It’s very difficult. But the rule of law always has to be in place when enforcing the law,” he added.

Mr. Duterte, who has extended his drug war from the first six months of his presidency to the end of his term in 2022, has been heavily criticized both by local and international human rights groups for short-cutting the judicial system in his crackdown on illegal drugs.

His take-no-prisoners approach to the drug menace has been blamed for the deaths of more than 4,000 drug suspects in police operations and thousands more in vigilante-style executions.

Prosecutor Fatou Bensouda of the International Criminal Court has opened a preliminary examination of a complaint for crimes against humanity against Mr. Duterte and at least 11 of his officials filed in The Hague by a confessed hit man who had recognized in the drug war killings the signature of the death squad that the President allegedly formed to kill criminals when he was mayor of Davao City.

At a recent meeting of the UN Human Rights Council in Geneva, Iceland urged the Philippines to allow an independent investigation of the drug war killings by the UN special rapporteur on extrajudicial killings, arbitrary or summary executions, Agnes Callamard.

At first, Malacañang expressed openness to such an investigation, but not by Callamard, who it said had prejudged the Duterte administration.

But on Thursday, Mr. Duterte changed his mind and ordered the police and the military to ignore any UN investigation of the drug war killings.

“When it comes to human rights, or whoever rapporteur it is, my order to you: Do not answer. Do not bother,” he said in a speech at a shooting competition organized by the police and the military in Davao City.

The President also ordered the police not to give information to UN investigators without his administration’s approval.

On Saturday, however, his spokesperson, Harry Roque, said the administration had not completely rejected a UN investigation, but just wanted a fair investigation.

Speaking in Katipunan, Zamboanga del Norte, Roque said Mr. Duterte wanted cooperation to be extended only to investigators who just wanted to establish the facts in his administration’s war on drugs.

“We will [cooperate only] with … people who do not have conclusions and are [fair in their] investigation to be able to draw a conclusion,” he said.

“If there were unlawful deaths, such as in the case of Kian delos Santos, the President would order their (policemen’s) punishment,” he added.

Delos Santos was a minor who was picked up and shot dead by police in Caloocan City in August last year.

Three officers have been charged in the boy’s death.

The entire Caloocan police force was sacked after officers killed two other minors two days after the alleged summary execution of Delos Santos. —WITH A REPORT FROM LEAH AGONOY