‘Too much, too soon,’ expert warns on PH-China sea study 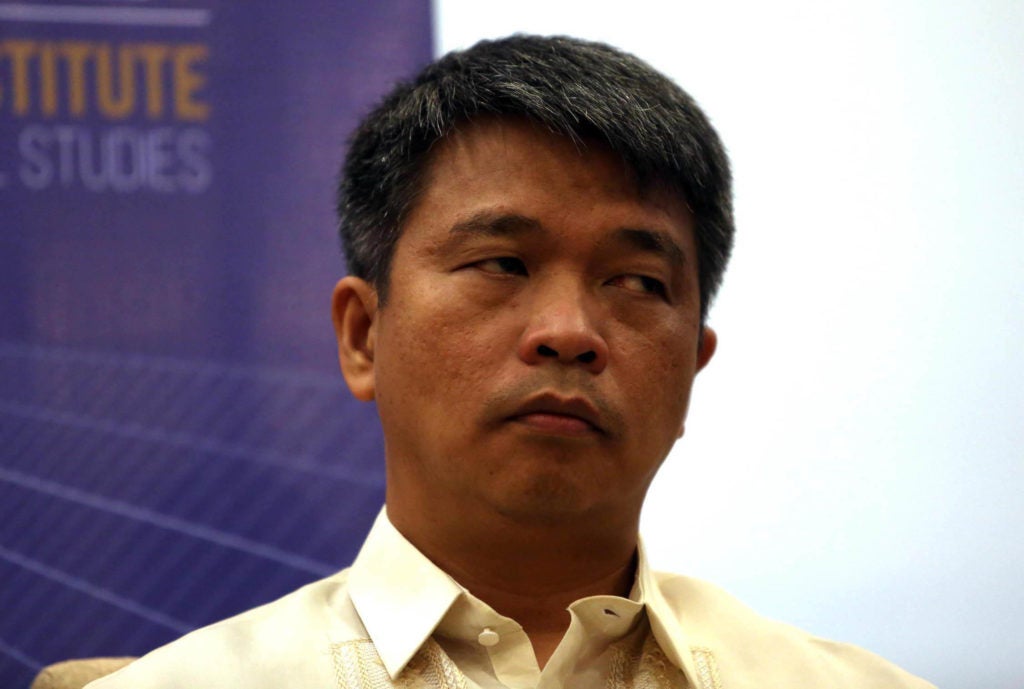 University of the Philippines Institute for Maritime Affairs and Law of the Sea Director Dr. Jay Batongbacal during the “Framework Code of Conduct, One Year After Arbitration” forum held in Manila Polo Club, Makati City. INQUIRER FILE PHOTO/LYN RILLON

PUERTO PRINCESA CITY — A maritime expert has questioned  Malacañang’s pronouncement that it is considering a “joint exploration” with China for potential energy deposits in an undisputed Philippine territory some 50 kilometers off Busuanga town in Palawan province, identified as Service Contract (SC) 57.

Lawyer Jay Batongbacal, director of the University of the Philippines Institute for Maritime Affairs and Law of the Sea, said in a social media post that the government’s plan to include the area in a deal offer made by China to jointly explore the Reed Bank area in the West Philippine Sea (WPS) was “giving too much, too soon” to the country’s favored neighbor.

Batongbacal was referring to an announcement made by President Rodrigo Duterte last week in Marawi City, and later clarified by Malacañang spokesperson Harry Roque, that the administration was considering China’s offer to explore both SC 57 and Reed Bank (SC 72).

Mr. Duterte described the planned deal as similar to “co-ownership.”

“Now their [Beijing] offer is joint exploration, which is like co-ownership. It’s like the two of us would be the owners. I think that’s better than fighting [over contested areas],” the President said.

SC 57 is a contract area awarded by the Department of Energy to the Philippine National Oil Co. (PNOC) in 2006. PNOC has since formed an exploration consortium with two foreign entities that included China National Offshore Oil Corp. (CNOOC) and Malaysian company Mitra Energy Ltd.

Roque, in a statement, explained that while the area covered by SC 57 was undisputed Philippine territory, the Duterte administration would be allowing China to jointly explore it for energy deposits with the Philippines.

“Service Contract 57 is not affected by any dispute. There can be joint exploration there because there is no dispute, so we are just allowing it,” Roque said on Wednesday.

Batongbacal warned that the deal would “elevate” the status of CNOOC from a mere subcontractor to PNOC to a “co-owner” of SC 57.

“By classifying SC 57 as ‘joint exploration,’ government leaders seem to be elevating the status of CNOOC from mere subcontractor-consortium partner to possibly a ‘co-owner,’ as [Duterte] describes it, not only of EEZ/CS (exclusive economic zone/continental shelf) areas but also territorial sea and archipelagic waters,” Batongbacal stated.

The West Philippine Sea is part of the South China Sea within the country’s 370-kilometer EEZ.

The Reed Bank area covered by SC 72 was awarded to Forum Energy.

Batongbacal said the government’s willingness to jointly explore Reed Bank with China would compromise SC 57 and set a precedent allowing China to venture into other undisputed Philippine territories.

“The government would be implicitly downgrading its position on SC 57 for the sake of dealing with SC 72 [Reed Bank]. So, instead of addressing the issue of how to go into joint exploration in SC 72, it will undermine its own position in, and creating a problem with, SC 57 and all other similar Philippine waters,” he said.

Supreme Court acting Chief Justice Antonio Carpio echoed Batongbacal’s position on the proposed joint venture, saying the government’s offer to China was akin to conceding half of the WPS area to the Chinese.

In a visit to Bacolod City on Friday, Carpio said “there is absolutely no way under the Constitution” that the Philippine government could give away half of the EEZ and make China its co-owner.

Carpio pointed out that an international tribunal had already ruled that the country’s EEZ west of Palawan belonged to the Philippines and “we have exclusive sovereign right to get all the oil, gas, other mineral resources and fisheries there.”