ABOARD USS CARL VINSON — The massive aircraft carrier USS Carl Vinson (CVN-70) is docked in Manila for a five-day port visit. But those interested will have to look from afar, as it is anchored some 10 kilometers away from shore.

The warship’s deployment in the Western Pacific is a show of presence amid China’s assertiveness in the disputed South China Sea. It came from a routine mission in the hotly-contested waters before its Manila stopover, which began Friday.

Lt. Cmdr. Tim Hawkins of Carl Vinson said they were not taking part in freedom of navigation operations in the South China Sea in the current deployment, but could do so in future missions.

“The Navy has been operating in the Western Pacific for more than 70 years. We have been performing routinely not only in the South China Sea but throughout the Western Pacific to do a few things: to work with our partners and allies, to promote regional security and stability, and reassert our belief that all should operate in accordance with international law, rules, standards, and norms in order to keep the seas free and commerce moving freely,” he told journalists invited by the US Embassy for a ship tour on Saturday.

He told the Associated Press that they would not be intimidated with China’s militarized islands, and said they would continue to operate wherever “international law allows us.” 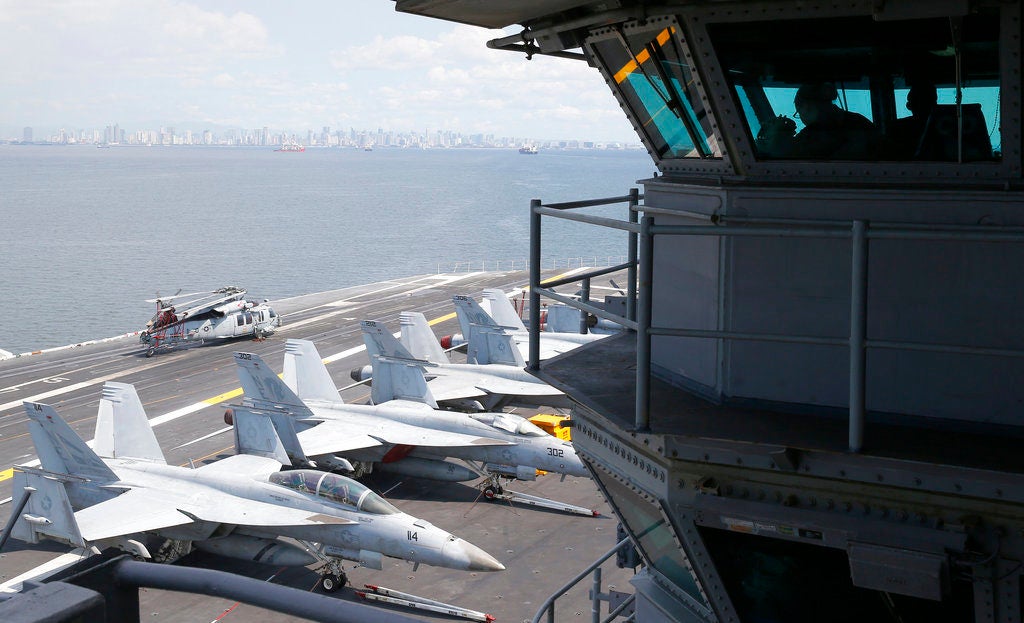 The supercarrier is home to 72 aircraft, mostly fighter jets, and 5,000 sailors. It is one of the 11 active aircraft carriers of US. Hawkins likened it to a ‘floating city.’

“You can also think of it as a floating city. We have lawyers, banks, medical services and dental services, all that stuff that it takes to support our crew and make sure we’re able to sustain our operations,” he said.

Hawkins refused to talk about future deployments, but reports said that the Carl Vinson would make a visit to Vietnam in March, the first US aircraft carrier to do so after the Vietnam War. The visit comes as the two countries strengthen their military cooperation amid China’s increasing aggressiveness and militarization in the South China Sea.

The Philippines, China, Brunei, Malaysia, Vietnam and Taiwan have overlapping claims in the South China Sea, a vital waterway rich in resources, and through which over one-third of global trade passes. /cbb