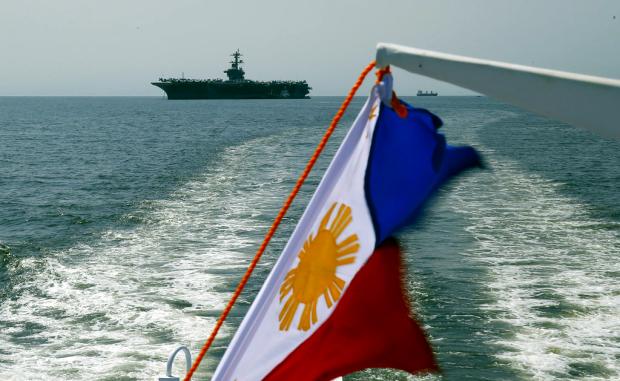 Seen behind a Philippine flag, the aircraft carrier USS Carl Vinson anchors off Manila during a five-day port call along with guided-missile destroyer USS Michael Murphy Saturday, Feb. 17, 2018. More than 5,000 sailors and crew make up the Carrier Strike Group 1 with the USS Carl Vinson boosting its fleet with strike fighters, airborne early warning aircrafts, helicopters and other air assets as they are deployed in the seas off Western Pacific. (Photo by BULLIT MARQUEZ / AP)

ABOARD USS CARL VINSON, Philippines — US forces are undeterred by China’s military buildup on man-made islands in the South China Sea and will continue patrolling the strategic, disputed waters wherever “international law allows us,” said a Navy officer aboard a mammoth US aircraft carrier brimming with F-18 fighter jets.

Lt. Cmdr. Tim Hawkins told The Associated Press on board the USS Carl Vinson that the Navy has carried out routine patrols at sea and in the air in the region for 70 years to promote security and guarantee the unimpeded flow of trade that’s crucial for Asian and US economies.

When President Donald Trump came to power, Southeast Asian officials were uncertain how deep the U.S. would get involved in the overlapping territorial claims involving China and its Southeast Asian neighbors. Trump’s predecessor, Barack Obama, was a vocal critic of China’s increasingly aggressive actions, including the construction of seven man-made islands equipped with troops, hangers, radar and missile stations and three long runways.

China claims the South China Sea almost in its entirety and has challenged the U.S. naval supremacy in the western Pacific.

The Trump administration has outlined a new security strategy that emphasized countering China’s rise and reinforcing the U.S. presence in the Indo-Pacific region, where Beijing and Washington have accused each other of stoking a dangerous military buildup and fought for wider influence.

Washington stakes no claims in the disputes but has declared that their peaceful resolution and the maintenance of freedom of navigation are in its national interest. US officials have said American warships will continue sailing close to Chinese-occupied features without prior notice, placing Washington in a continuing collision course with China’s interests.

In January, China accused the US of trespassing when the US guided missile destroyer USS Hopper sailed near the Chinese-guarded Scarborough Shoal, which Beijing wrestled from the Philippines in 2012, despite its proximity to the main northern island of Luzon. After voicing a strong protest, China said it would take “necessary measures” to protect its sovereignty.

The nuclear-powered Carl Vinson patrolled the sea prior to its Manila visit but did not conduct a freedom of navigation operation, Hawkins said. “That’s not to say that we won’t or we can’t, but we have not, up to this point,” he said.

There are reports that the Carl Vinson will also make a port call in Danang in Vietnam – another critical rival of China’s ambitions in the South China Sea – as the first American aircraft carrier since the Vietnam War ended in 1975, but Hawkins declined to provide details of future trips.

China has also opposed the Philippine military’s deployment of a Japanese-donated Beechcraft King Air patrol plane in late January to Scarborough, a Philippine official said on condition of anonymity because of a lack of authority to discuss the issue publicly. Chinese officials have relayed their objection to their Philippine counterparts, the official said.

China and Japan have their own territorial rifts in the East China Sea.

There was no immediate comment from Philippine military officials about China’s opposition to the surveillance flights at Scarborough.

US and Chinese officials have said they have no intention of going to war in the disputed sea, but their governments have projected their firepower and clout in a delicate play of gunboat diplomacy and deterrence.

“We’re prepared to conduct a spectrum of operations, whether that’s providing humanitarian assistance, disaster relief in the time of an emergency, or whether we have to conduct operations that require us to send strike fighters ashore,” Hawkins said. “We don’t have to use that spectrum, but we’re ready to, in case we need to.”

The US Navy invited journalists Saturday on board the 35-year-old Carl Vinson, which was packed with 72 aircraft, including F-18 Hornets, helicopters and surveillance aircraft.

President Rodrigo Duterte has tried to back down from what he said was a Philippine foreign policy that was steeply oriented toward the US, but has allowed considerable engagements with his country’s treaty ally to continue while reviving once-frosty ties with China in a bid to bolster trade and gain infrastructure funds.

China, the Philippines, Vietnam, Taiwan, Malaysia and Brunei have long contested ownership of the South China Sea, where a bulk of the trade and oil that fuel Asia’s bullish economies passes through. 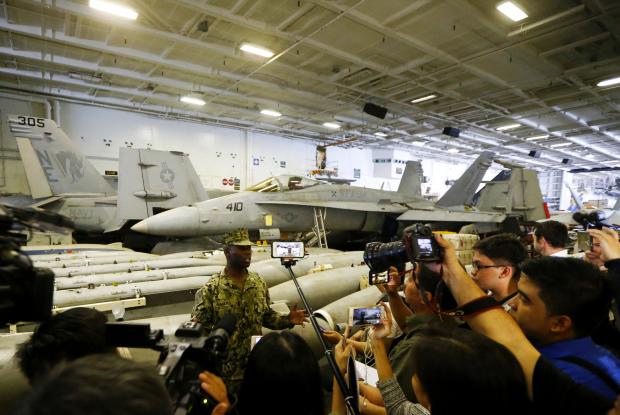 With fighter jets in the background, Lt. Cmdr. Tim Hawkins talks to the media on board the USS Carl Vinson aircraft carrier anchors off Manila, Philippines, for a five-day port call along with guided-missile destroyer USS Michael Murphy, Saturday, Feb. 17, 2018. (Photo by BULLIT MARQUEZ / AP)