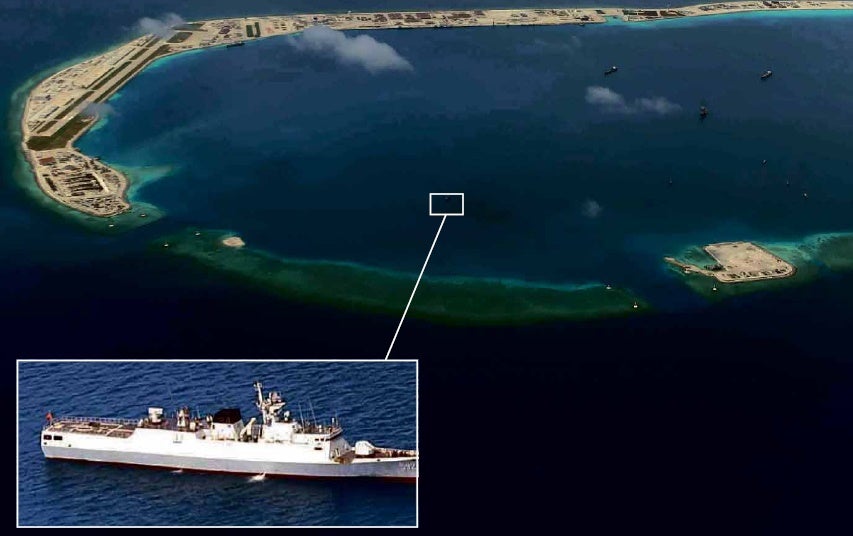 NOT FOR SEARCH AND RESCUE The Chinese missile frigate Luzhou seen at Panganiban Reef on June 16, 2017. China has also built a runway and military facilities on Panganiban, internationally known as Mischief Reef.

A Chinese expert on the South China Sea says Beijing will do more dredging to expand some of the artificial islands it has built in the Spratly archipelago and insists that the development is intended for civilian purposes.

“Most of the construction on islands in the South China Sea were completed in 2015 and the pace then slowed. Civilian facility construction is the major focus of the South China Sea islands building and the portion of defense deployment is relatively small,” Chen Xiangmiao, a research fellow at the National Institute for the South China Sea, said in a report published on Monday in the Global Times, an English-language tabloid under the auspices of the Chinese Communist Party newspaper People’s Daily.

Chen’s comments came on the same day Inquirer.net published new aerial photographs showing China was almost done building air and naval bases on artificial islands it had built on seven reefs claimed by the Philippines in the Spratly archipelago.

The photos showed multistory buildings, communication towers, radomes, lighthouses and observation towers on the artificial islands, with runways ready for use on the three biggest reefs—Kagitingan (known internationally as Fiery Cross), Panganiban (Mischief) and Zamora (Subi).

The US think tank Asia Maritime Transparency Initiative (Amti) is convinced China is militarizing the islands to control the South China Sea.

“The days of arguing whether or not the Chinese are building civilian or military bases are long behind us,” Amti director Gregory Poling told reporters on Friday.

“You do not build 72 fighter jet hangars for search and rescue or for fishing shelters. You build them because you want an air base,” Poling said.

“Now maybe there are civilian structures or two but first and foremost these are military facilities,” he added.

China is not done with reclamation in the Spratlys, according to Chen.

Chen observed that there was “domestic pressure” on President Rodrigo Duterte to take a “tough stance” on China’s island-building in the South China Sea.

But Zhuang Guotu, head of Xiamen University’s Southeast Asian Studies Center, said in the same report that “China has the right to build whatever it needs within its territory.”

China claims nearly all of the 3.5-million-square-kilometer South China Sea.

But the UN-backed Permanent Court of Arbitration in The Hague, in a ruling handed down on July 12, 2016, in favor of the Philippines, declared invalid China’s claim for having no basis in international law.

Mr. Duterte, who came to power shortly before the ruling came down, has placed the dispute with China on the back burner while seeking Chinese trade and economic aid.

The President’s stance has angered critics, who demand he assert Philippine sovereignty and work with the international community to pressure China into respecting the tribunal’s decision.

Malacañang, however, won’t even protest China’s military buildup in the Spratlys, saying Beijing has given Manila a “good faith commitment” that it won’t build anymore artificial islands in the South China Sea.

Supreme Court Senior Associate Justice Antonio Carpio, a member of the legal team that argued the Philippines’ case in The Hague court, has likened Malacañang’s stance to “trusting a thief.”

On Wednesday, Sen. Joel Villanueva warned Malacañang against relying on China’s good faith and implored the Palace to uphold the Philippines’ “claim of rightful ownership” to the West Philippine Sea, waters within the country’s 370-kilometer exclusive economic zone in the South China Sea.

The militant Bagong Alyansang Makabayan (Bayan) on Wednesday called on the public to join a rally it was organizing for Saturday in front of the Chinese Embassy in Makati City to protest China’s militarization of the waterway.

“We call on patriotic Filipinos to troop to the Chinese consulate in Makati to express our strong opposition to the illegal activities being carried out by China in the West Philippine Sea,” said Renato Reyes Jr., secretary general of Bayan.

He said the military assets in the South China Sea were “not for military expansion” but for defense purposes.

Chen and Zhuang agreed that the United States was “the biggest threat to stability in the South China Sea.”

“The US, Australia, Japan and other allies will constantly provoke China over this issue and that will incite other neighboring South China Sea countries to do the same,” Zhuang said. —With reports from Pathricia Ann V. Roxas and Jerome Aning