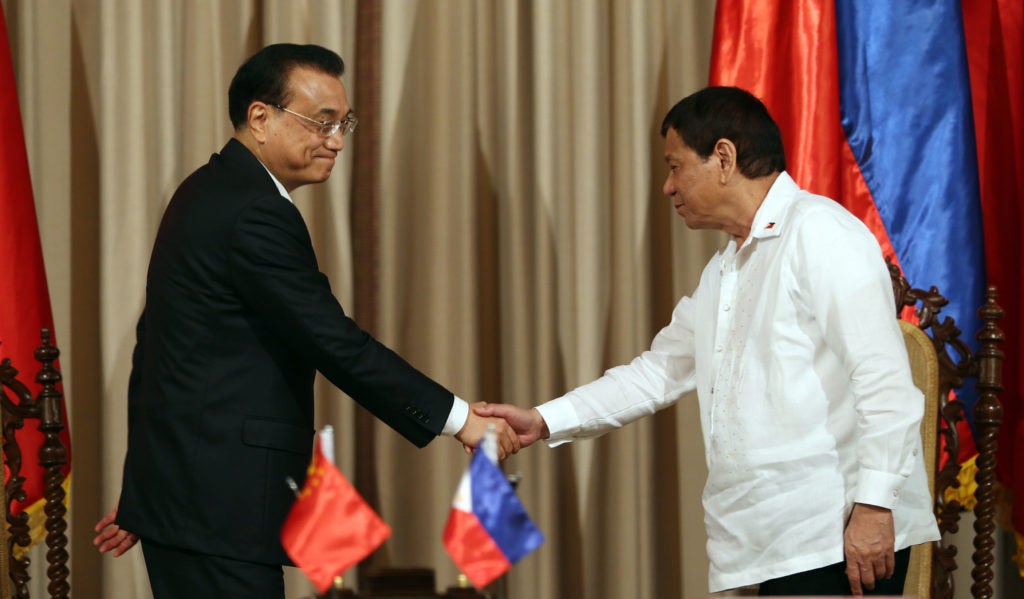 We’re on our own.

In a policy shift, the Philippines has decided to go it alone in dealing with China to find a final solution to their territorial dispute in the West Philippine Sea.

The West Philippine Sea is the waters within the Philippines’ 370-kilometer (EEZ) in the heavily disputed South China Sea.

Presidential spokesperson Harry Roque on Thursday confirmed a report by Chinese state media that President Duterte promised Chinese President Xi Jinping when they met in Vietnam on Saturday that the Philippines would now “properly handle maritime issues with China based on bilateral consensus via bilateral channels.”

China’s official Xinhua news agency also reported on Thursday that China and the Philippines agreed at the end of a visit to Manila by Chinese Premier Li Keqiang to avoid force to resolve their differences over the West Philippine Sea.

Xinhua referred to a joint statement that said China and the Philippines reaffirmed the importance of peace in the South China Sea and of freedom of navigation and overflight.

There should be no violence or threats of violence and the dispute should be resolved via talks between the “relevant sovereign countries,” it added.

The policy shift comes as the Association of Southeast Asian Nations (Asean), which the Philippines chairs this year, prepares to begin negotiations with China on a proposed code of conduct for claimants in the South China Sea.

“I can confirm the report that the President has articulated preference for bilateral talks rather than multilateral talks in resolving the dispute,” Roque said in a press briefing.

“I do not know if this is a major shift. But what I do know is President Duterte has been consistent that he is open to bilateral talks as far as resolving the conflict is concerned,” he said.

China claims nearly all of the 3.5-million-square-kilometer South China Sea, including portions claimed by Asean members Brunei, Malaysia, the Philippines and Vietnam.

Taiwan also has claims in the waterway, where $3 trillion in global trade passes every year.

China has long insisted that the disputes should be dealt with bilaterally, meaning claimants should deal directly with Beijing and not involve any third party.

“China also raised or also stated that they have very good bilateral relations with all the claimant countries,” Roque said.

Without military muscle to stop China’s incursion into the West Philippine Sea, the Philippines in the last few years had taken a “multilateral” tack: improving ties with other claimant countries, seeking help from regional powers like the United States, and presenting its case in international forums.

This policy culminated in the July 2016 ruling of the UN-backed Permanent Court of Arbitration that invalidated China’s sweeping claims in the South China Sea on historical grounds and clarified the Philippines’ rights to its EEZ in the waterway.

Roque on Thursday insisted that Manila’s policy shift would not affect the arbitral ruling.

Roque said the arbitral ruling would have no bearing on the code of conduct  in the South China Sea that Asean would be negotiating with China.

He said that when the countries restate the principles of freedom of navigation in the high seas and the EEZs, they would not be applying the arbitral ruling “but … a principle under [the UN Convention on the Law of the Sea], which is a codification of the state of general international law.”

Southeast Asian countries and China agreed to open formal negotiations for the adoption of a code of conduct for the claimants in the South China Sea during a summit in Manila earlier this week.

The negotiations for the document that will set the guidelines on how the claimants should act in the South China Sea are set to begin next year.

No time frame was given, but there was consensus that it should be concluded “as soon as possible,” Roque said.

Southeast Asian and Chinese foreign ministers adopted a framework for the negotiations in August.

It took 15 years to adopt a framework, and China, President Duterte said earlier this week, wanted to fast-track negotiations for the code.

Roque said the Philippines and the other claimants wanted the code of conduct to be legally binding, or it would just be “aspirational.”

He said this was clear in the framework.

“I think that was a priority of the President because unless it becomes legally binding, we would not achieve the kind of predictability that all the countries want in order to achieve peace and stability in the region,” he said.