President Rodrigo Duterte on Tuesday night turned over the chairmanship of the Association of Southeast Asian Nations (Asean) to Singapore Prime Minister Lee Hsien Loong, who congratulated the Philippines for being an “excellent host.”

At the closing ceremony of the 31st Asean Summit and related meetings in Manila, Mr. Duterte playfully took several moments holding on to the ceremonial gavel before handing it over to Lee.

“Your Excellency, Prime Minister Lee Hsien Loong, I have the honor on this auspicious occasion to hand over, finally,” the President said to loud applause, “the chairmanship of Asean to the Republic of Singapore effective Jan. 1, 2018.”

Lee said Singapore was honored to accept the gavel from the Philippines.

“It has been an utmost pleasure and honor for the Philippines to have hosted you and your delegations throughout the year in various meetings, activities and events,” Mr. Duterte said.

“We hope you have taken with you the warmth of Filipino hospitality, genuine care and affection we gave to all our guests,” he added.

Lee thanked the Philippines for achieving during its yearlong chairmanship the adoption of a negotiating framework for a code of conduct in the South China Sea, the conclusion of a free trade agreement between Asean and Hong Kong, and the adoption of an Asean consensus on the promotion and protection of the rights of migrant workers. 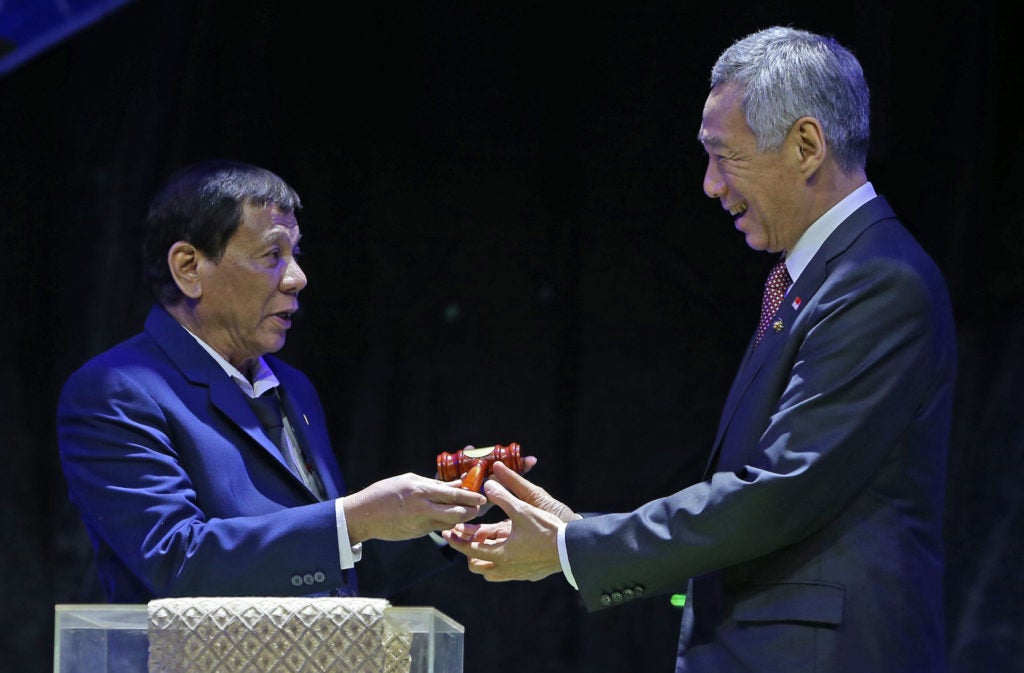 NEXT CHAIR With the turnover of the gavel, the Asean chairmanship is transferred from the
Philippines to Singapore. —EDWIN BACASMAS

Lee said that as the new  Asean chair, Singapore would focus on “resilience and innovation” to promote a rules-based regional order so Asean could better deal with security issues such as cybersecurity, transnational crimes and terrorism.

He said Singapore would continue to build on the work of past Asean chairs to promote regional economic integration and to build better relations with external partners.

Asean also has 11 dialogue partners and hosts major security gatherings in the region such as the 27-nation Asean Regional Forum, the 18-nation East Asia Summit and the 13-nation Asean Plus Three Summit.

Asean is a lifeboat for all 10 countries in Southeast Asia to come together, according to Lee.

The regional bloc is a vehicle “to have our voice heard on the world stage and to be able to manage our own issues among ourselves, and to cooperate to improve the lives of the people in Southeast Asia,” Lee told Singapore reporters.

In a speech at the closing ceremony for the 31st Asean Summit, Lee said Singapore would also steer fellow Asean members to press on with regional economic integration and enhance connectivity, so as to keep the region competitive and prosperous.

And it will find innovative ways to manage and make use of digital technologies, and equip Asean citizens with skills and capabilities.

The goal, Lee added, was for Asean to remain a central and dynamic driving force in the region that can deal with challenges and opportunities.

If it can make Asean more effective and strengthen cooperation with its neighbors, this will benefit the man in the street, he said.

“It means for Singapore a stabler world to live in, a safer Southeast Asia in which we can operate, a more prosperous region in which we can grow our economy, expand our markets and seize opportunities which will be there,” he said.

Building on this, Asean and China agreed to start talks on the code of conduct, both sides said at the Asean-China Summit with Chinese Premier Li Keqiang on Nov 13. These talks will begin early next year, Lee told Singapore reporters. —REPORTS FROM DONA Z. PAZZIBUGAN AND THE STRAIT TIMES/ASIA NEWS NETWORK