Foreign press on Asean confab in Manila: Professionally done, but… 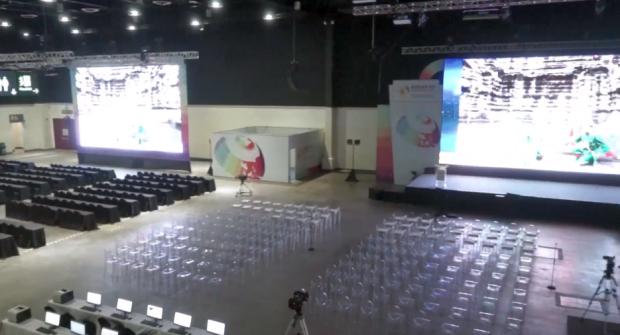 The main press briefing room of the International Media Center. (Photo from an RTVM video)

This was how some foreign journalists interviewed by INQUIRER.net  on Tuesday think about the recently-concluded 31st Association of Southeast Asian Nations (Asean) Summit and Related Summit hosted by the Philippines.

However, it would have been more ideal if the media was given more access to the delegations, meetings, and related documents for a much better coverage, an American journalist from a known business paper in the United States said.

“It’s always nice to have actual access to delegations, which we don’t have. It’s always taking place in [Philippine International Convention Center] or hotels. It would be nice if we have access to that,” the journalist said, who declined to be named for this report.

“I would have liked more access to press briefings like [President Rodrigo] Duterte and [US President Donald] Trump, but there were like, only two slots available,” she told INQUIRER.net.

Dardard said news outlets in France were more interested in the outcome of Duterte’s first meeting with Trump – two of today’s most controversial world leaders.

Local news outfits, on the other hand, reported the Summit comprehensively and were quick to get the news online, the American journalist said. He said Filipino journalists were “good” and “fearless” in asking questions during press briefings.

“I also feel like the Philippine media  is good in asking questions during press conferences, not afraid to get up and ask straightforward questions, much more so in some ways other Asean media, which tend to be more respectful [or] more like hesitant to ask questions to authorities. Filipinos just ask,” he said.

Imam Priyono, broadcaster for state-run Indonesian station, TVRI, also think that the local media is independent and critical, expressing their views whenever needed.

“I saw that a few media try to give [criticism] maybe, but in a good way. It’s free to talk, free to express [both sides] and the framing of the media.”

Overall, Priyono said the Philippines had hosted the foreign press “very well,” implementing tight security and providing Halal food for Muslims like him.

“[The food] is good. I’m a Muslim so I appreciate that we have a Halal corner and it makes us more comfortable,” he noted.

About 2,000 local and foreign journalists covered the Asean Summit 2017, which coincided with the regional bloc’s 50th anniversary. They were accommodated by the 16,000 square-meter World Trade Center in Pasay City, which was transformed into an International Media Center – the hub of the operations for the media covering the two-day summit from November 13 to 14, 2017.     /kga