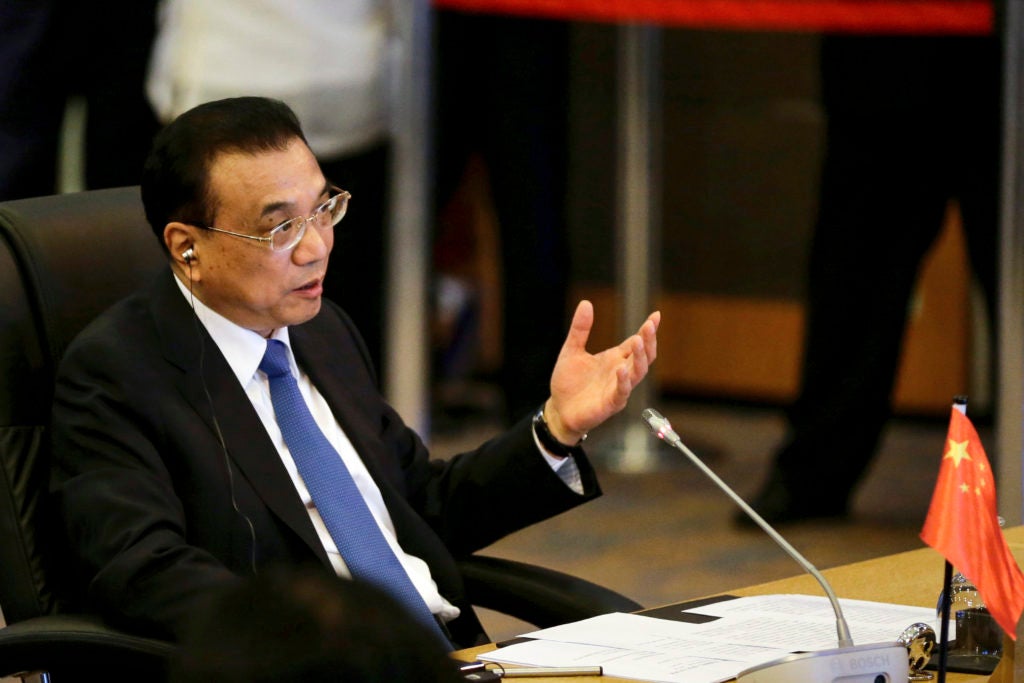 China’s agreement to begin discussions with the Association of Southeast Asian Nations (Asean) on the fine print of a code of conduct framework for the disputed South China Sea will be a “stabilizer” for the region, Chinese Premier Li Keqiang said on Monday.

“China’s greatest hope is for peace and stability in the South China Sea,” Li told Asean leaders in Manila.

Southeast Asia and China foreign ministers in August adopted a negotiating framework for a code of conduct in the South China Sea, a move they hailed as progress but seen by critics as a tactic to buy China time to consolidate its maritime power.

Li, addressing Asean leaders during a summit in Manila, said there was a consensus on moving forward and to try to peacefully resolve the thorny issue.

“We hope the talks on the code of conduct will bolster mutual understanding and trust. We will strive under the agreement to reach a consensus on achieving early implementation of the code of conduct,” Li said, according to a transcript of his speech released by China’s foreign ministry on Tuesday.

Li didn’t give a time frame, but said he hoped this move would be a “stabilizer” for the region.

Philippine presidential spokesperson Harry Roque said in a statement on Monday that Asean and China, at a summit presided over by President Rodrigo Duterte, had agreed to open negotiations on the code of conduct.

“One of the outcomes of the meetings is to commence the negotiations on a substantive and effective code of conduct in the South China Sea after concluding the framework agreement on the code of conduct,” Roque said.

He said Mr. Duterte did not refer to the South China Sea disputes at the Asean leaders’ meeting with US President Donald Trump on Monday, but Malaysian Prime Minister Najib Razak mentioned it in the bloc’s common statement during the sitdown with the US leader.

Trump last week offered to mediate the maritime disputes. Asean was studying whether to accept the offer.

He also said Chinese President Xi Jinping assured President Duterte on Saturday that China was “not ready to go to war with anyone” over the South China Sea.

Mr. Duterte’s allies on Tuesday hailed the decision of Asean and China to begin talks on the code of conduct, calling it “one of the most significant achievements” of this year’s Asean Summit.

Only an incremental move

“The fact that China agreed to sit down with Asean to draft the code of conduct for the South China Sea can already be considered a milestone for peace and development in the region,” said Eastern Samar Rep. Ben Evardone.

Critics say the agreement to talk on the details of the code of conduct is only an incremental move, with a final agreement not likely anytime soon.

Gregory Poling, director of Asia Maritime Transparency Initiative, believes it will take China and Asean years to conclude a code of conduct.

“Those negotiations, if they begin—and they haven’t—would still take years,” Poling told reporters on the sidelines of the Stratbase ADR Institute summit in Makati City on Nov. 8.

Can’t be taken for granted

“What I expect is that the disappointments that [are] going to be obvious after this year might finally kick Asean states into gear, make them realize that they need to think of a different venue to get this done,” he said.

Despite a period of relative stability in the South China Sea, some countries at the summit said this shouldn’t be taken for granted.

The framework seeks to advance a 2002 Declaration of Conduct of Parties in the South China Sea, which has mostly been ignored by claimant states, particularly China.

China built seven artificial islands in disputed waters, three of which are equipped with runways, surface-to-air missiles and radars.

All parties say the framework is only an outline for how the code will be established but critics say the failure to outline as an initial objective the need to make the code legally binding and enforceable, or have a dispute resolution mechanism, raises doubts about how effective the pact will be.

Signing China up to a legally binding and enforceable code for the strategic waterway has long been a goal for claimant members of Asean, some of which have sparred for years over what they see as China’s disregard for their sovereign rights and its blocking of fishermen and energy exploration efforts.

Malaysia, Taiwan, Brunei, Vietnam and the Philippines all claim some or all of the South China Sea and its myriad shoals, reefs and islands. —Reports from Philip C. Tubeza, DJ Yap, Nikko Dizon and the wires