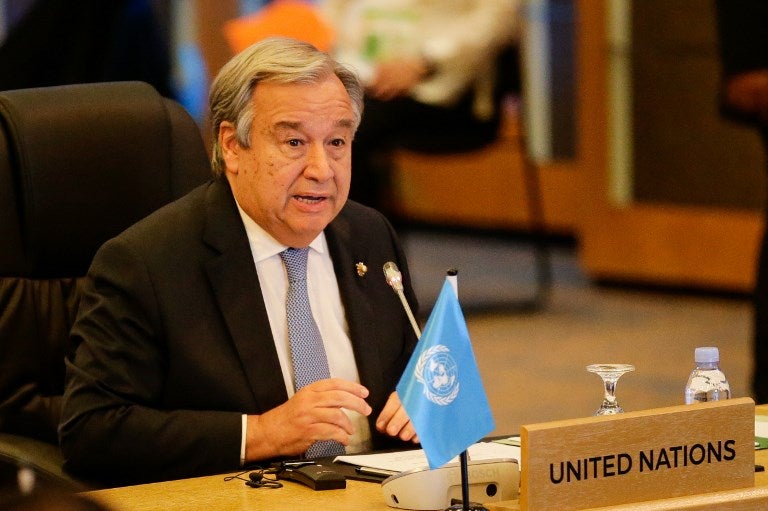 United Nations (UN) Secretary General António Guterres rallied regional leaders on the need for effective law enforcement and the respect for human rights in the war against drugs and terrorism.

Guterres made the call during the Association of Southeast Asian Nations-UN (Asean-UN) Summit on Monday night.

“The United Nations stands ready to provide technical support to Asean and its member countries in their efforts to counter terrorism and violent extremism, and to combat transnational crime, including drug trafficking and people trafficking, through policies designed to protect their citizens with effective law enforcement and respect for human rights,” Guterres said.

President Rodrigo Duterte was supposed to be present on the meeting but conflict of schedule prevented him from attending.

The UN has earned the ire of Duterte for interfering in the administration’s war on drugs and condemning the spate of killings in the country.

Guterres said he was “heartened by the recent liberation of Marawi from ISIS (Islamic State of Iraq and Syria).”

“Continued trilateral cooperation between the Philippines, Indonesia and Malaysia will strengthen regional peace and security,” he said.

Guterres also brought up his “deep concern” with the plight of Rohingya refugees.

“It is a worrying escalation in a protracted tragedy and a potential source of instability in the region, and radicalization,” he said.

“Since the beginning of the crisis, and beyond the end of violence, I have called for unhindered humanitarian access to affected communities; and the right to safe, voluntary and dignified return of those who fled, to their places of origin,” he added. /je