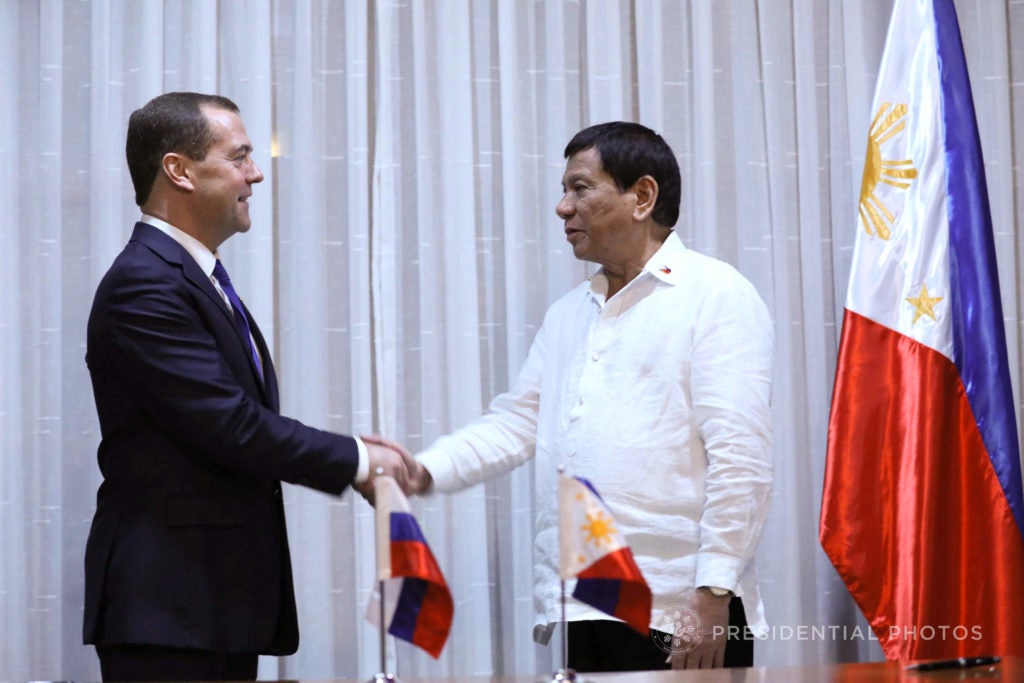 President Rodrigo Duterte has pledged two accused Russian drug traffickers will be detained in a “comfortable house”, rather than his nation’s badly over-crowded jails.

Duterte made the commitment at a meeting late Monday with Russian Prime Minister Dmitri Medvedev on the sidelines of a regional summit in Manila.

“I would just like to say that we have a working functional justice system here and they will get a fair trial and that they will be detained in a comfortable house,” Duterte told Medvedev, according to an official transcript.

“Whether (the allegations are) true or not, we will find out but I will see to it that they are treated fairly and no additional stress on their person that will happen.”

Yuri Kirdyushkin and Anastasia Novopashina were under investigation for drug smuggling but had not been convicted, Duterte said.

Duterte’s 16-month rule has been dominated by a crackdown on illegal drugs in which police have reported killing 3,967 suspects.

Rights groups and domestic critics say the crackdown could be a crime against humanity, warning that police and hired assassins are carrying out mass murder.

Duterte has repeatedly railed against his critics and insisted human rights should take a backseat to eradicating drug traffickers.

He has also said he would be happy for all Filipino drug addicts to be “slaughtered”.

In many cases prisoners have to take turns sleeping while waiting for years for their cases to go through the courts.

Duterte did not provide details on the two Russians’ cases, and the Russian embassy and Philippine Drug Enforcement Agency spokesmen told AFP they could not immediately comment on the case.

Previous news reports have said Kirdyushkin was arrested with about 10 kilos (22 pounds) of cocaine at Manila airport on October 5 last year.

Russia’s ties with the Philippines, a long-time US ally, have been improving dramatically under Duterte.

Duterte is a self-described socialist and fan of Russian President Vladimir Putin.

Duterte on Monday also thanked Russia for supplying guns and other weapons that he said helped defeat Islamist militants in the southern Philippine city of Marawi.

The official transcript of Monday’s meeting did not include Medvedev’s response on the two detained suspects.

Read Next
Robredo to Asean: Shield youth from socmed misuse ‘to sow hate and anger’
EDITORS' PICK
How to lose a PH genius: Wesley So officially a US citizen
Every Filipino home can now be a smart home with realme TechLife
Nestlé Philippines’ ‘NESCAFÉ Plan’ bags Grand Anvil at PRSP 56th Anvil Awards
Smart reinforces superiority with best speed and mobile video experience in PH
New 3,045 COVID-19 cases push PH total active cases to 40,074
LTO’s P500-M deal for screws draws scrutiny
MOST READ
Robredo on Sara Duterte leading poll surveys: Why are Filipinos drawn to leadership of this kind?
How to lose a Filipino genius: Wesley So officially a US citizen
Duterte order to police, military on Reds: ‘Kill them all’
Kris Aquino dispels rumors on son Josh getting married, thanks Ogie Diaz for defending him
Don't miss out on the latest news and information.