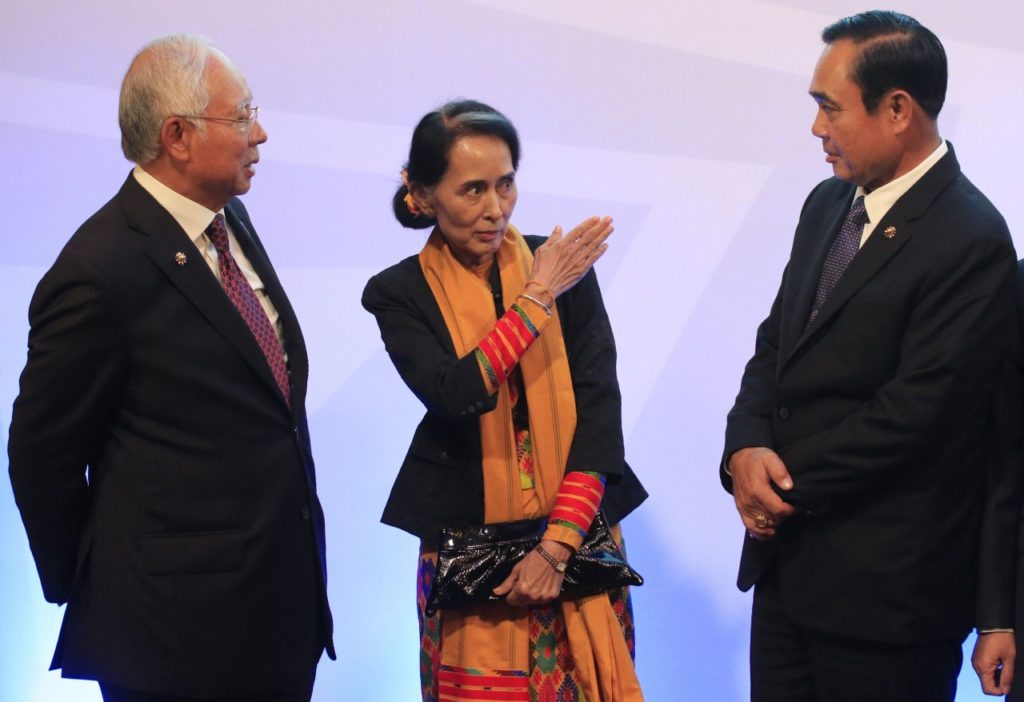 Asean has expressed solidarity with the elected civilian government of Aung San Suu Kyi in promoting humanitarian assistance to ease tensions and conflict in Rakhine state, rather than issuing a critical statement over Myanmar’s handling of the Rohingya crisis.

While Indonesian President Joko Widodo, leader of the world’s largest Muslim country, said he was “very concerned” about the humanitarian crisis, no harsh criticism was made against Myanmar’s de facto civilian leader Suu Kyi in her handling of the Rohingya situation, which has resulted in more than 600,000 refugees fleeing across the border to Bangladesh.Thai Prime Minister General Prayut Chan-o-cha yesterday also had a 10-minute corridor meeting with Suu Kyi, but the details of their conversation were not disclosed.

Thailand has previously agreed with Myanmar in referring to Rohingya as “Bengalis”, which suggests that the minority is not an indigenous Myanmar ethnic group.

Accord to a document seen by The Nation, Asean countries will continue to emphasise the Asean Coordinating Centre for Humanitarian Assistance on Disaster Management in providing aid to affected areas in Southeast Asia, including Rakhine state.The Rakhine crisis has been widely discussed by Asean leaders during the Philippines summit. Suu Kyi welcomed international aid during the 40th Asean-US Summit yesterday but she did not elaborate further on the matter, Philippine presidential spokesperson Harry Roque said yesterday during a press briefing in Manila.

Roque added that two to three countries had also touched on the Rakhine state crisis but he refused to specify which ones.Asean Muslim countries, particularly Malaysia and Indonesia, have been vocal in denouncing Rohyingya migration as a transnational crisis, while the rest of Asean has been uncertain about to what extent it should interfere into the centuries-old ethnic conflict.

An Asean official source also said the issue was a domestic problem, although it affected Myanmar’s land and sea neighbours. During 31st Asean Summit Plenary yesterday, Widodo said he understood the complexity in Rakhine state but urged countries including Asean members to “not keep silent”.

“The longer the problem is left will have an impact on the security and stability of the region including the emergence of radicalism and trafficking in persons,” he said, also calling for “trust and solidarity” among Asean countries on solving the issue.Indonesia, he continued, had submitted a “4 + 1 formula” proposal for Rakhine, including supporting the implementation of former UN secretary-general Kofi Annan’s recommendations. Jakarta also expected talks between Bangladesh and Myanmar on repatriation could be resolved and implemented soon, he added.

In the face of widespread “atrocities” against ethnic Rohingya people in Myanmar, the United States has been cautiously stepping up pressure on that country’s army, while taking care to avoid endangering the civilian government of Suu Kyi. As the US takes a more active role in the region – several American delegations have passed through in recent weeks – Tillerson plans to meet Suu Kyi as well as army chief General Min Aung Hlaing.

Tillerson is expected to adopt a firm tone with military leaders, whom he has deemed “responsible” for the crisis facing Rohingya.