Calm in South China Sea cannot be taken for granted—Asean 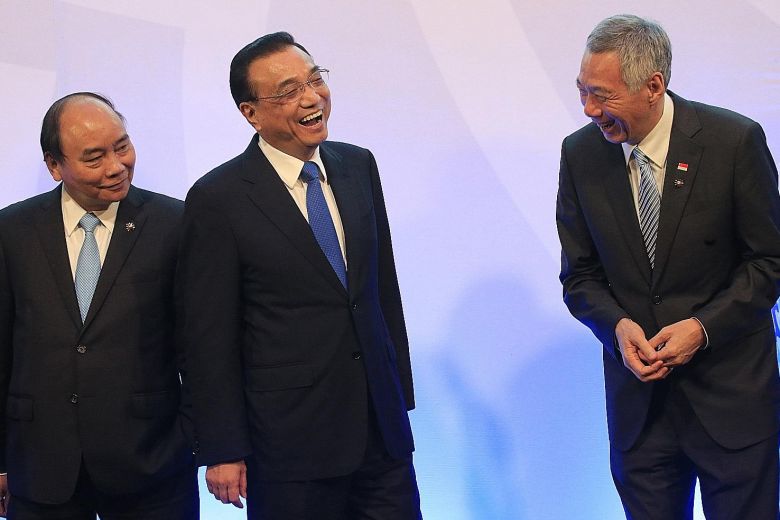 Leaders of all 10 Asean nations yesterday (Nov 13) agreed to start negotiations with China on a code of conduct for managing tensions in the South China Sea.

The situation in the disputed waters is calmer now, but the current progress cannot be taken for granted, they said in a common statement at the Asean-China Summit.

Speaking before him, Chinese Premier Li Keqiang said China “always sees Asean as a priority in our neighbourhood diplomacy”.

“We are committed to working with Asean to be good neighbours, good friends and good partners, and to always stand together rain or shine,” Mr Li added in his opening remarks, which did not explicitly mention the South China Sea.

The seeds of yesterday’s decision were planted in August, when foreign ministers from Asean and China agreed on the framework for the code to prevent skirmishes from escalating into open conflict.

This paved the way for them to formally agree to come to the negotiating table.

“I trust that we will continue this positive momentum and work towards a substantive and effective code of conduct. I look forward to its early conclusion,” said Prime Minister Lee.

Cooperation is important to maintain peace, stability, freedom of navigation in and overflight above the South China Sea in accordance with international law, including the 1982 United Nations Convention on the Law of the Sea, he noted.

He said: “It is in our collective interest to avoid miscalculations that could lead to escalation of tensions.”

Asean therefore remains committed to implementing fully and effectively the 2002 Declaration on the Conduct of Parties in the South China Sea in its entirety.

Both sides also adopted a declaration on a decade of coastal and marine environmental protection in the South China Sea yesterday. Prime Minister Lee said: “We should continue to build confidence and trust through practical maritime cooperation .”

The South China Sea issue cuts to the heart of Asean-China relations, he noted, as he looked ahead to Asean working with China next year, when Singapore will take over the group’s rotating chairmanship.

“By managing the South China Sea issue well, we can keep Asean-China relations on the current positive trajectory,” he added.

Asean has a broad cooperation agenda with China, including tourism, trade and infrastructure. “Key to this agenda must be the foundation of solid Asean-China relations,” Prime Minister Lee noted.

“Good Asean-China relations are important to the region’s stability and development,” he added.

As country coordinator and incoming Asean chair, Singapore will continue to play its part to deepen Asean-China cooperation, he said.

He noted that both sides can work on developing infrastructure, and welcomed ongoing efforts to “explore synergies” between Asean’s Master Plan on Connectivity and China’s Belt and Road initiative.

“We look forward to greater cooperation through the Asian Infrastructure Investment Bank and the Silk Road Fund to enhance regional infrastructure development.”

Prime Minister Lee said: “Singapore will continue to serve as an honest broker and work closely with China and other Asean member states to promote greater mutual understanding and cooperation between Asean and China.”