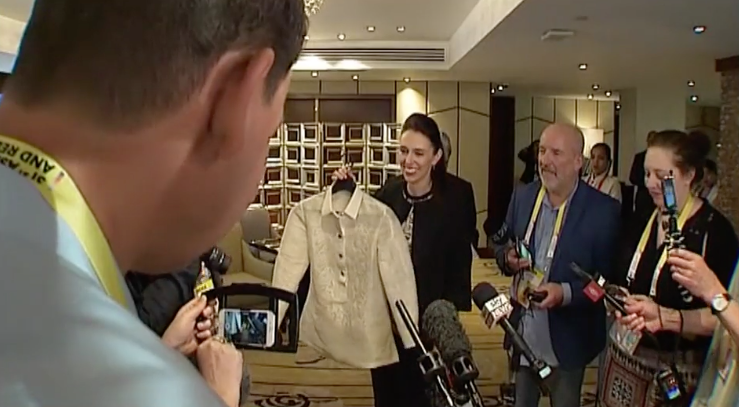 New Zealand Prime Minister Jacinda Ardern, clad in a barong Tagalog, was all smiles when she posed for a photo with President Duterte and his partner, Honeylet Avanceña, at Sunday night’s gala dinner for leaders attending the Association of Southeast Asian Nations (Asean) Summit in Manila.

It turned out she wasn’t comfortable wearing the traditional Philippine costume made of fiber from the pineapple plant.

In a video uploaded by New Zealand news outfit, Newshub, Ardern shows off to journalists the barong designed by renowned Filipino designer, Albert Andrada. The ivory-colored shirt is hand-embroidered with a floral pattern in the chest.

Ardern describes the shirt, made of pineapple husk, as scratchy and “quite starched.”

When the journalists asked her to describe how the barong smelled, Ardern laughed and said: “I’m not going to sniff the shirt on camera,” before asking one of those in the room if he would like to sniff the clothing.

The reporters also asked New Zealand’s foreign minister Winston Peters if he got one for himself, he just grinned and said: “If I did, I’d regard it as being personal.” /cbb /pdi