Russian PM assures Duterte: We are by the side of PH | Global News
Close
menu
search

Russian PM assures Duterte: We are by the side of PH 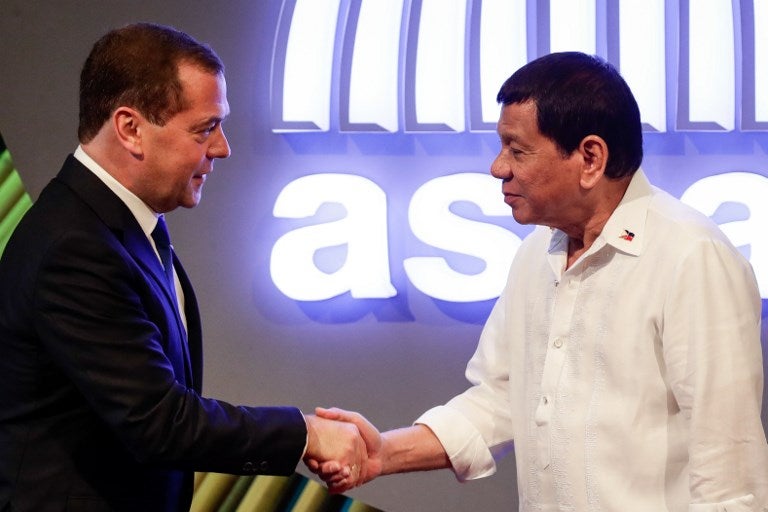 “We are ready to expand our ties in all the areas and dimensions including politics and trade economic cooperation, cultural ties, as well as cooperation and interaction on quite sensitive things and spheres such as fight against terrorism and mutual technical cooperation and arms supplies,” Medvedev told Duterte Monday night.

“We are gratified by your presence so that also we can express our desire to thank you personally and the Russian people and government for helping us on a crucial moment during the war in Marawi,” Duterte told Medvedev.

“We were able to use the rifles and the arms that you gave us on time,” he added.

During his bilateral meeting with Russian President Vladimir Putin at the Asia-Pacific Economic Cooperation (Apec) in Vietnam, Duterte thanked Russia for helping “turn the tide” in the fight against Islamic State (ISIS)-inspired terrorists in Marawi City.

The Russian government donated thousands of assault rifles, 20 military trucks, bullets and helmets to the Philippines, which would be used in the country’s fight against terrorism.

Medvedev responded: “No doubt we will keep standing by your side, we’ll keep assisting you in this very important and sensitive theme and along this track of fight against terrorism in the course like bringing or restoring law and order.”

He acknowledged the improving relations between the Philippines and Russia during his bilateral meeting with Duterte.

“Definitely I believe that we have opened with this a new chapter in our relationship,” he said.

“The fact that we are meeting with you late – quite late at night, points to a new level of our partnership, of our relations,” the Russian prime minister added. /cbb