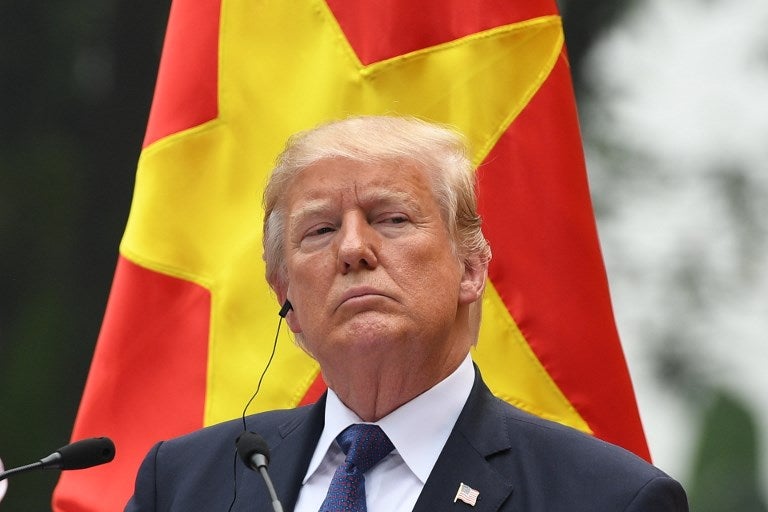 Donald Trump on Monday lauded his trade achievements during a five-nation tour of Asia, promising he would reveal “far bigger” steps when he returned to Washington.

The US president has frequently bemoaned what he calls “unfair” international trade deals and a perceived lack of respect for America and its leaders.

But standing alongside the prime ministers of Japan and Australia in Manila on Monday, he said that was all changing.

“The way they’ve treated us, the respect that Japan and China and South Korea, in particular — because we went there — have treated us has been really a great respect for the people of our country, the people of the United States,” he said.

“And we very much appreciate it, I will say that. It was red carpet like nobody, I think, has probably ever received.

“And that really is a sign of respect, perhaps, for me a little bit, but really for our country.”

Trump was lavished with praise during his time in Tokyo, Seoul and Beijing, in what analysts said was a deliberate strategy of flattery.

In South Korea he was treated to clamorous applause during a parliamentary address, on the first state visit by a US leader in a quarter of a century.

In Beijing, he toured the Forbidden City with Chinese leader Xi Jinping as part of an extravagant “state visit-plus” that also included a performance of Peking Opera.

But observers say the concrete accomplishments from the tour are few, with the banner $250 billion of trade agreements announced in Beijing not quite what it was cracked up to be.

An analysis by Bloomberg News said the roughly 15 agreements are mostly non-binding memorandums of understanding. Many will take years to bear fruit, if they ever do.

Reversing America’s yawning $350-billion trade deficit with China was a key plank of Trump’s election pledge to “Make America Great Again” and bring jobs back to the hollowed out industrial heartland that voted for him.

In Manila on Monday, where he is attending meetings with the 10-member Association of Southeast Asian Nations (ASEAN) and several other countries, Trump said there would be good news once he returned to the White House on Wednesday.

“We’ve made a lot of big progress on trade,” he told reporters. “We have deficits with almost everybody. Those deficits are going to be cut very quickly and very substantially.

“We’ve made some very big steps with respect to trade, far bigger than anything you know, in addition to about $300 billion in sales to various companies, including China — that was $250 billion and going up very substantially from that.”

He offered no details, saying only that his announcement would “probably” come on Wednesday.