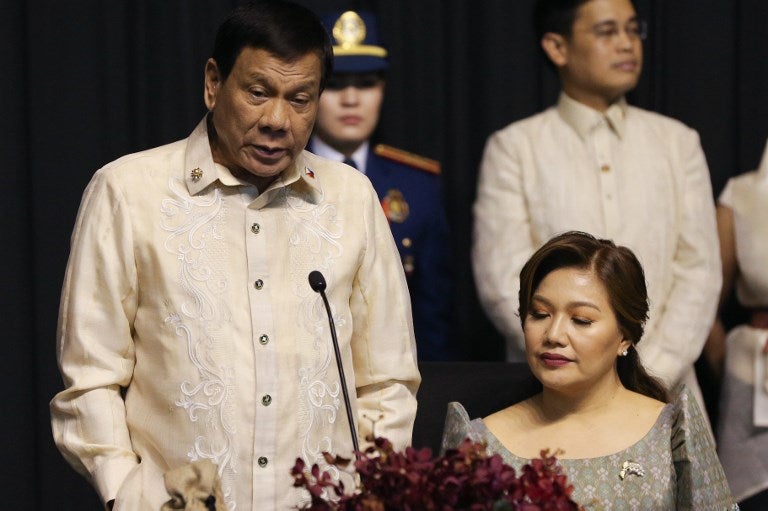 President Rodrigo Duterte speaks during a special gala celebration dinner for the Association of Southeast Asian Nations (ASEAN) in Manila on November 12, 2017. AFP

President Rodrigo Duterte made a pitch before regional and world leaders to unite against illegal drugs and terrorism, as he underscored the importance of maintaining peace and stability in the region at the opening of the 31st Association Southeast Asian (Asean) Summit on Monday at the Cultural Center of the Philippines (CCP).

Duterte started his speech by thanking the international community  for the liberation of Marawi City, which was under siege for five months by the Islamic State-inspired Maute group.

“Resolute, we are now in the process of helping people back on their feet to reclaim their lives,” he said.

“I apologize for setting the tone of my statement in such a manner. But I only want to emphasize that our meetings for the next two days present an excellent opportunity for us to engage in meaningful discussion on matters of regional and international importance,” he added.

According to Mr. Duterte, illegal drugs and terrorism pose great threat to the region as well as the rest of the world.

“Terrorism and violent extremism endanger the peace, stability and security of our region because these threats know no boundaries,” he said.

“The menace of illegal drug trade continues to endanger the very fabric of our societies,’ he added.

Piracy and armed robbery, he further said, “put a dent on our growth and disrupt the stability of both regional and global commerce.”

“These and other issues are high on the agenda of our meetings along with the other non-traditional security issues that challenge the prosperity of our economies, the integrity of our institutions, and more importantly, the safety of our people,” Duterte noted.

Additionally, Duterte announced that Asean member-states have arrived at a consensus on the protection and promotion of rights of migrant workers.

“I will be joining other ASEAN leaders tomorrow (Tuesday) in signing this landmark document that would strengthen social protection, access to justice, humane and fair treatment, and access to health services for our people,” he said.

During the two-day summit, Duterte is expected to preside over various meetings with Asean member-states and dialogue partners over political and security concerns, including pressing threats to regional peace and stability, particularly the maritime dispute in the South China Sea.   /kga