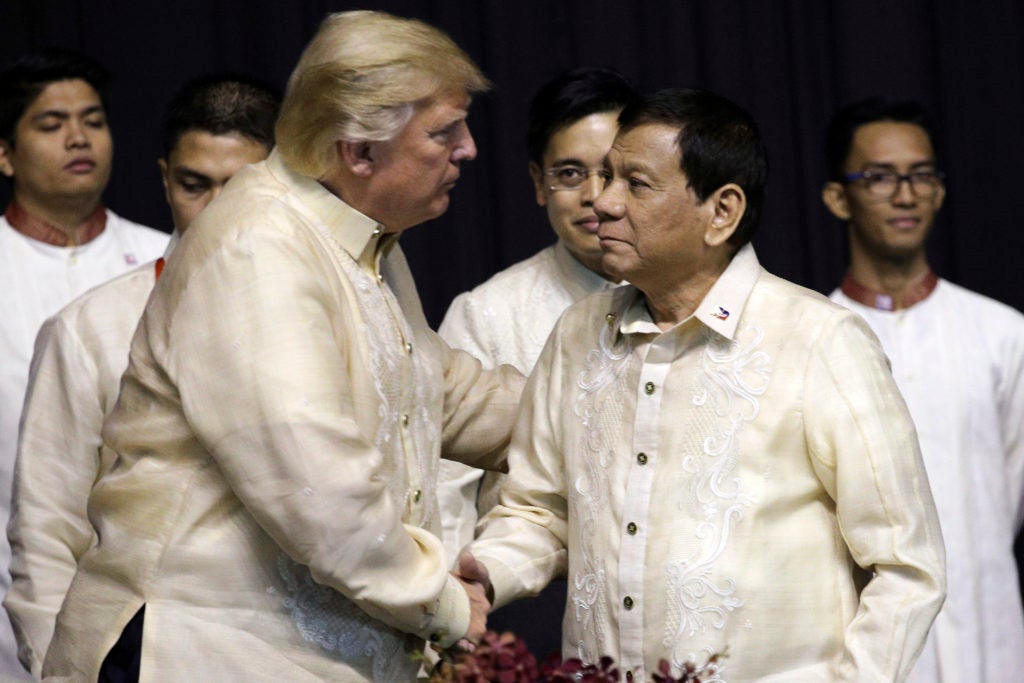 President Rodrigo Duterte on Sunday said that he was “sure” US President Donald Trump would not raise concerns about extrajudicial killings (EJKs) in his war on drugs when they meet in Manila simply because the accusations were not true.

Four UN special rapporteurs, however, have urged the 10 countries of the Association of Southeast Asian Nations (Asean) to tackle pressing human rights concerns in the region during the 31st Asean Summit in Manila this week.

Trump is attending the summit, and rights groups have urged him to pressure Mr. Duterte over the thousands of lives lost in his war on drugs.

But Mr. Duterte expressed confidence this would not happen, saying Trump had already given him his “words of encouragement” during a brief encounter on the sidelines of the Asia-Pacific Economic Cooperation Leaders’ Meeting in Da Nang, Vietnam, on Saturday.

“I’m sure he will not take it up,” Mr. Duterte said in a news conference when asked if Trump raised the issue in Vietnam or if he was expected to mention it during the Asean Summit.

With the Philippines as this year’s Asean chair, Mr. Duterte is playing host to the Asean leaders and their dialogue partners.

Mr. Duterte was also asked if he saw any area of cooperation between the Philippines and the United States in the drug war, especially after Trump had declared the US opioid crisis a public health emergency.

But Mr. Duterte declined to “give a specific answer out of respect” to Trump because the opioid crisis was America’s problem.

He said his doctor prescribed the drug after he had a motorcycle accident four years ago.

Mr. Duterte said Trump asked him how he was able to fight the war against illegal drugs.

He said he told the US president that he implemented “stricter rules and hard[er] enforcement.”

Mr. Duterte reminded reporters that he had promised to deal with terrorism and illegal drugs “harshly” during the presidential campaign last year.

“You can look for the meaning of the word ‘harsh’ in the dictionary … That is my campaign promise. I will not, for the life of me, renege on that promise because I won on the basis of those promises,” he said.

Mr. Duterte said Trump would not raise the reports about the killings because “he is not the human rights commission.”

Actually, Trump congratulated him for the government’s success in resolving the Marawi crisis and dealing with the problem of illegal drugs in the country, he said.

Mr. Duterte quoted Trump as telling him in Vietnam: “You know, you handle it very well.”

“We do not talk about these things because, first of all, they are not true. And the second is, we do not do it. And I said, you will have to find a soldier or a policeman anywhere in the country where I ordered the killing of a man on bended knees, in surrender, or lying down,” he said.

Mr. Duterte defended himself against the accusations that he ordered the police to kill drug suspects.

“By saying… ‘I will destroy you, I kill you,’ that is not a conspiracy. That is the rage in my heart for treating the Filipinos like shit,” he said.

He again launched into his usual rant against local and international human rights groups and the opposition who continue to urge him to put an end to the killings in his war on drugs.

Mr. Duterte asked where the opposition got the information about the “thousands of deaths,” challenging his critics to identify the 10,000th victim and tell him the circumstances of the victim’s death.

The four UN experts noted increasing rights violations on advocates for women’s rights, environmental and land issues, and due process in drug cases, as well as lawyers, journalists and parliamentarians.

They called on Asean countries to amend or repeal existing laws or draft laws that could be used to criminalize civil society work, reminding the countries of their commitment to international human rights conventions.

A local human rights group, Karapatan, on Saturday criticized the Asean Intergovernmental Commission on Human Rights (AICHR), calling it “inutile and toothless” for failing to deal with any human rights concern in the Philippines.

“The AICHR should act decisively to address the urgent concerns of peoples of Southeast Asia now, lest it fully exposes itself as another intergovernmental body that deodorizes governments such as the Philippines,which are among the most notorious human rights violators in the world,” said Cristina Palabay, secretary general of Karapatan.

9-year-old girl dies after getting struck by lightning