Canadian Prime Minister Justin Trudeau received a pop star welcome on Sunday when he and other world leaders and heads of state arrived at Clark International Airport in Pampanga province to attend the 31st Association of Southeast Asian Nations (Asean) summit.

They were not given the same welcome fanfare accorded to those who came through Clark. There was no red carpet welcome, arrival honors and media coverage at Naia.

Trudeau landed shortly before 2 p.m. and was loudly cheered by students performing dances for dignitaries, who flew in and were later driven in security convoys to Manila where the three-day summit would be held.

The Canadian leader broke protocol by moving closer to about 100 performers from schools in Pampanga and Bulacan provinces who had been rendering folk dances throughout the day.

Security personnel were agitated when Trudeau was swarmed by the performers, mostly children who were wearing traditional costumes.

He was welcomed by Science Secretary Fortunato de la Peña and Pampanga officials.

Trudeau last visited the country in 2015 to take part in that year’s Asia-Pacific Economic Cooperation Summit. He was hounded then by a controversial shipment of Canadian waste materials that had remained unclaimed at the Port of Manila since 2013.

But it was not only Trudeau who broke protocol. New Zealand Prime Minister Jacinda Ardern, the other non-Asean leader to fly here, was already being escorted into her car when she decided to approach the students to thank them for the warm welcome.

The leaders were treated to performances by the students, who were each paid P1,000. But four of them fainted due to dehydration and dizziness, according to organizers of the arrival ceremonies here.

Trump, 7 others at Naia

US Air Force One, carrying Trump, landed at Naia’s Balagbag ramp at around 5:45 p.m. The US president was fetched from the site by the US Marine One chopper.

First lady Melania Trump returned to the United States on Nov. 11 after her visit to China.

A separate plane carrying US Secretary of State Rex Tillerson landed around 5:10 p.m.

The other leaders arrived within a three-hour period. 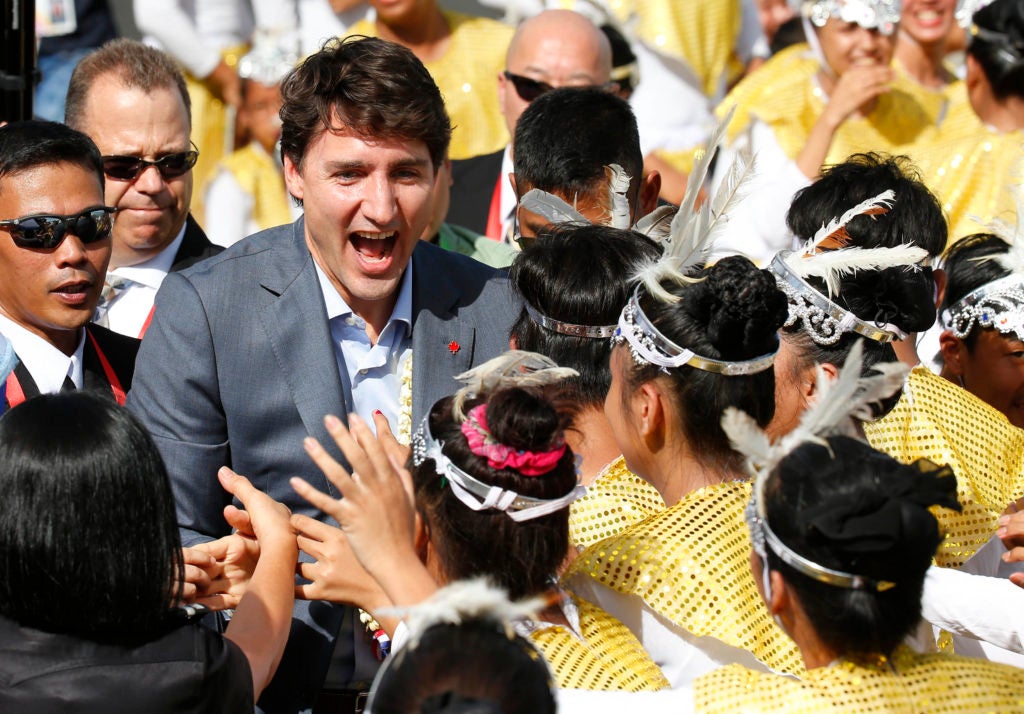 Canadian Prime Minister Justin Trudeau is greeted by performers upon arrival at Clark International Airport in Clark, Pampanga province north of Manila, Philippines Sunday, Nov. 12, 2017. Trudeau is one of more than a dozen leaders who will be attending the 31st ASEAN Summit and Related Summits in Manila. (AP Photo/Bullit Marquez)

He was met by presidential spokesperson Harry Roque and the Philippine permanent representative to the United Nations’ Ambassador Teodoro Locsin Jr.

Officials of the Manila International Airport Authority (Miaa) and Civil Aviation Authority of the Philippines (Caap) said they abided by President Duterte’s instructions not to disrupt flights at Naia and not to close roads other than the earlier ones announced.

The Miaa said no flights were canceled. The only notice-to-airmen it issued was one advising pilots to “expect random convoy movements” on the ground of Asean VIP delegates, according to the Caap.

Cabinet officials, including Foreign Secretary Alan Peter Cayetano, Finance Secretary Carlos Dominguez, Environment Secretary Roy Cimatu, Presidential Communications Secretary Martin Andanar and Labor Secretary Silvestre Bello III, were at Naia to greet the arriving leaders and their entourage as they boarded their vehicles at the tarmac on their way out of the airport. —With a report from Nestor Corrales