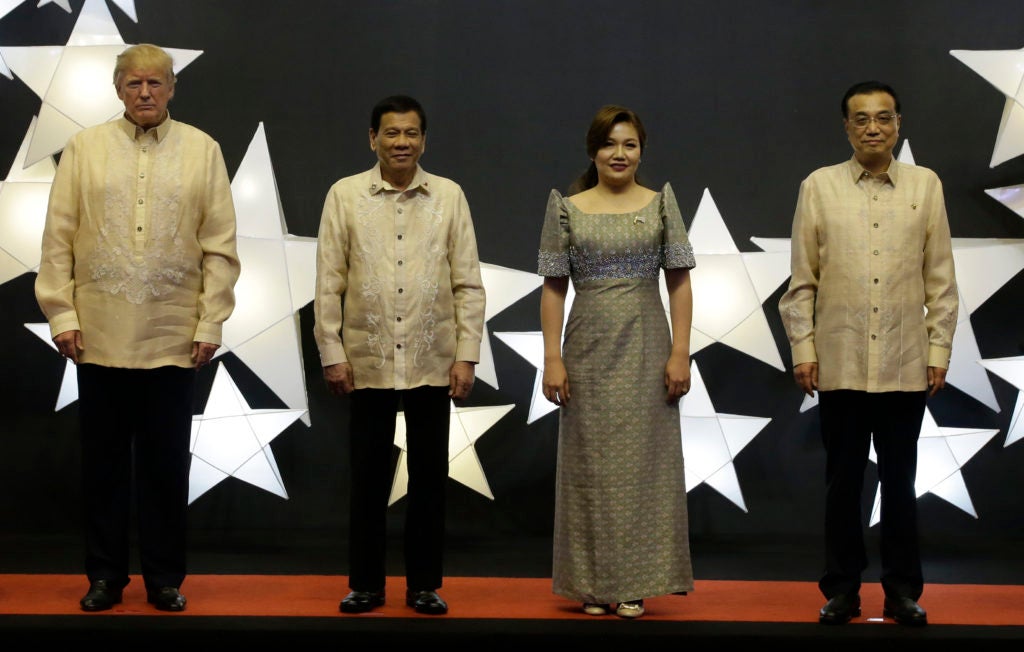 From left U.S. President Donald Trump, Philippine President Rodrigo Duterte, his partner Cielito Avencana and Chinese Premier Li Keqiang pose for a photo before the start of the Special Gala Celebration of the 50th Anniversary of ASEAN in Manila, Philippines on Sunday, Nov. 12, 2017. The gala marks the 50th anniversary of the Association of Southeast Asian Nations. (AP Photo/Aaron Favila-POOL)

US President Donald Trump said on Sunday that he was prepared to mediate between claimants to the South China Sea, a move welcomed by the Association of Southeast Asian Nations (Asean), which must decide as one whether to accept him as mediator.

His Chinese counterpart, President Xi Jinping, played down concerns over Beijing’s military buildup and the prospects of war in the contested waters, in a frank discussion with President Rodrigo Duterte in Da Nang, Vietnam, where all three of them attended the Asia-Pacific Economic Cooperation Leaders’ Meeting.

“We welcome that offer. Let’s see how everyone responds. In cases like this, the response must come from everyone,” Foreign Secretary Alan Peter Cayetano told reporters on Sunday on the sidelines of meetings held ahead of the 31st Asean Summit in Manila.

Trump and Xi Jinping spoke separately about the territorial rifts ahead of the Asean Summit with the United States, China and other global players, where the disputes are expected to get the spotlight, along with North Korea’s nuclear threat and terrorism.

Trump spoke in Vietnam, which has become the most vocal opponent of China’s claims and its construction and militarization of artificial islands in the sea.

China claims nearly all of the South China Sea, including portions of the waterway claimed by Brunei, Malaysia, the Philippines, Vietnam and Taiwan.

To bolster its claims, it has reclaimed land on seven reefs in the South China Sea, transforming the reefs into artificial islands, and topped these with runways and installations that can be used to project its military might across the region.

“I’m a very good mediator and arbitrator,” Trump said in comments at a meeting in Hanoi with Vietnam’s president, Tran Dai Quang, before flying to Manila for the Asean Summit.

But Trump’s offer faces major obstacles. For one, China has steadfastly opposed what it calls US meddling in the disputes and has balked at the US Navy’s incursions into what Beijing considers its territorial waters in the South China Sea.

Washington is not among the claimants to the waterway, among the busiest in the world, but it has declared it has a national interest in ensuring freedom of navigation and overflight and the peaceful resolution of the disputes.

Allies back an active American military presence in the disputed waters to serve as a counterweight to China’s increasingly assertive actions, including the construction of artificial islands equipped with military installations.

President Duterte said Xi, during their meeting in Da Nang, assured him of China’s peaceful intentions in the South China Sea, saying China would work with Asean to safeguard peace in the region.

He said that when he raised concerns over China’s increasing military capability in the South China Sea, Xi replied: “No, it’s nothing.”

“He acknowledged that war cannot be promoted by anybody, [that] it would only mean destruction for all of us,” Mr. Duterte said in a news conference early on Sunday after flying back to Manila. “He knows that if he goes to war, everything will blow up.”

He said Xi assured him that sea-lanes in the South China Sea “will be open to everybody.”

“He assured us again. He said, ‘Do not worry. You have all the rights of the safe passage,” Mr. Duterte quoted Xi as telling him.

The Chinese leader, however, would not back down on Beijing’s territorial claim, Mr. Duterte said and justified his decision not to immediately demand Chinese compliance with a ruling by a UN-linked tribunal that invalidated China’s sweeping claims in the South China Sea on historical grounds.

He said the arbitration won by the Philippines against China last year “does not mean anything to anyone except China” because all the other claimants could file cases with the arbitral tribunal.

‘No time for aggression’

“It will be very messy for the Philippines … so just talk to China,” he said.

Mr. Duterte said the Philippines under his administration “never surrendered anything” to China in the territorial dispute.

“Just say I do not want to talk about this for the moment. It is not time for aggression” he said.

Mr. Duterte said he invited Xi to come to the Philippines for a state visit and that the Chinese leader replied: “In due time.”

He said Xi was “surprised” that he came out “strong” about having a code of conduct in the South China Sea but he explained that he had to raise the code as this year’s Asean chair.

“President Xi Jinping mentioned about a summit or a meeting, multilateral only to talk about the rules of conduct. It has nothing to do with sovereignty,” Mr. Duterte said.

“If you go to the negotiating table and you start with the statement ‘that I am here to claim validity of our ownership,’ you’re wasting your time. They will not talk about it,” he said.

At an Asean business leaders’ meeting later on Monday, Mr. Duterte said the South China Sea was “better left untouched” so as not to trigger war.

Earlier, Mr. Duterte’s spokesperson, Harry Roque, said Xi, during the President’s meeting with the Chinese leader, noted that there “was already an agreement on the framework of the code of conduct and the discussion will continue and he expects this to be finished.”

Southeast Asian foreign ministers and China adopted the negotiating framework for a code of conduct in the South China Sea in August, in a move they hailed as progress but one seen by critics as a tactic to buy China time to consolidate its power.

The framework seeks to advance a 2002 Declaration of Conduct of Parties in the South China Sea, which has mostly been ignored by claimant states, particularly China.

All parties say the framework is only an outline for how the code will be established and critics raise doubts about how effective the pact will be.

The framework will be endorsed by China and members of Asean at a summit in Manila on Monday, according to a diplomat from one of the regional bloc’s countries.

The next step is for Asean and China to start formal consultations and negotiations for the actual code of conduct, and the earliest that talks on this can start is February 2018, the diplomat said. —With reports from Leila B. Salaverria and the wires