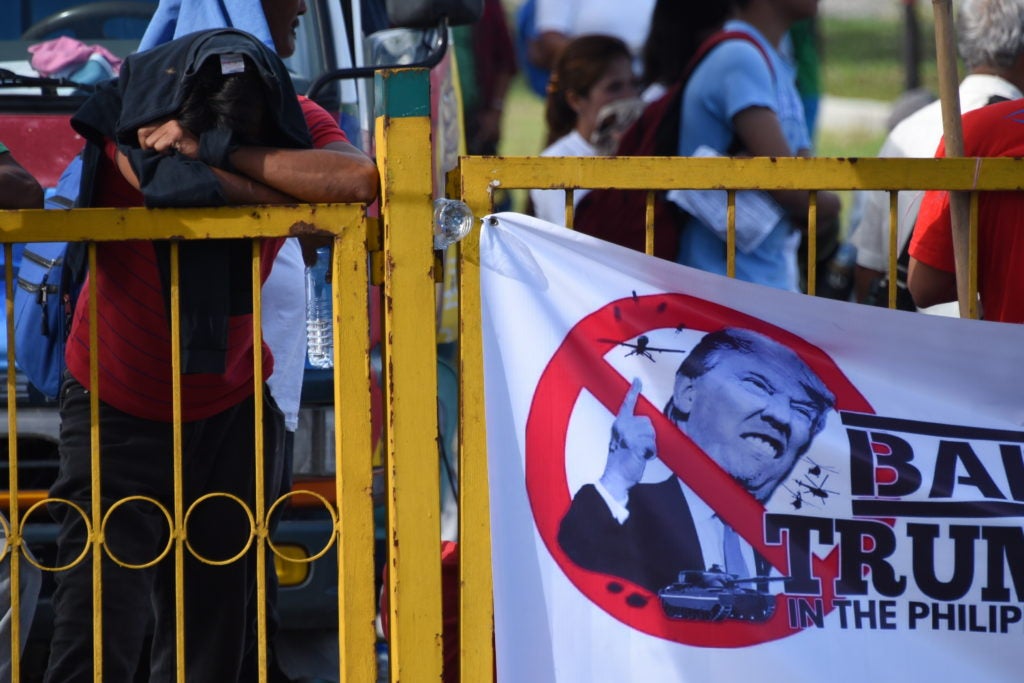 An Anti-Trump protest erupted on Sunday (Nov. 12) outside Clark Freeport. Members of the Kilusan Para sa Pambansang Demokrasya staged a rally near the freeport gates where many delegates to the 31st ASEAN Summit arrived. American President Donald Trump is attending the summit.
Photo by EV Espiritu

CLARK FREEPORT — Objecting to what they called “American militarism” under the administration of US President Donald Trump, activists massed up outside this free port on Sunday to urge the Association of Southeast Asian Nations (Asean) to be a zone of peace that is independent of US influence.

Members of Kilusan Para sa Pambansang Demokrasya (KPD) and Bagong Alyansang Makabayan (Bayan) gathered at Bayanihan Park, 10 kilometers away from Clark International Airport, as Asean leaders and the heads of state of dialogue-partner countries arrived to take part in the 31st Asean Summit in Manila. Trump is joining the summit.

At 1 p.m., Bayan reported gathering around 500 members while KPD said it gathered 300 members.

More than 600 policemen, holding iron shields and wielding wooden batons, positioned themselves at the side of the main gate, which allowed motorists to come and go except during a series of full road lockdowns when the dignitaries arrived.

The protests were peaceful. The policemen were stationed 500 meters from the protesters.

Bayan members occupied the right side of the park’s Salakot, a hat-shaped marker symbolizing the friendship of the Philippines and the United States during an era when America maintained military bases in the country.

KPD members held their ground near the police’s Station 4.

Lawyer Virginia Lacsa-Suarez, KPD national secretary general, said Asean should not take the side of the United States or China.

“Asean should push for fair trade and decent living for its people. It should carve a zone of peace. It is time that Asean oppose war and nuclear arms,” Suarez said.

Citing reports, she said the United States had not backtracked from its Asia-Pacific policy pivot as reflected by the deployment of 60 percent of its naval and air power in the region.

In the rally, Bayan leaders took turns reporting about the hardships suffered by various sectors as a result of the plunder of resources in ancestral domains, the conversion of productive lands into mega cities and the construction of a “wide expanse of highways and large military complexes.” —Tonette Orejas