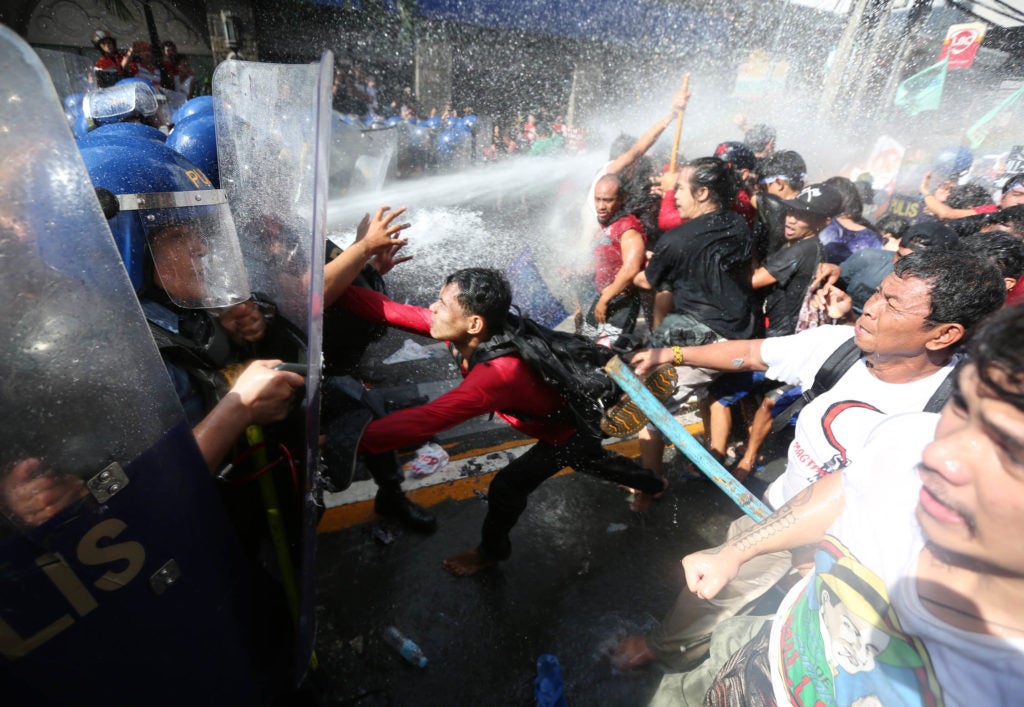 DISPERSED Activists protesting the visit of US President Donald Trump to the country are dispersed by riot police using water cannons during a rally along UN Avenue in Manila. —MARIANNE BERMUDEZ

Women’s rights groups across Southeast Asia on Sunday called on the Association of Southeast Asian Nations to make sexual violence against women and children a priority on the agenda of the 31st Asean Summit in Manila.

In a forum organized by women’s rights network Weave, the women’s groups lamented how sexual violence is often sidelined from the Asean agenda, which often prioritizes economic and security issues.

They also condemned the increasing number of sexual violence cases against women and children amid rising authoritarianism in the region.

The rights advocates called on the Asean leaders to condemn sexual violence through outcome documents and strengthening women’s access to response and support systems.

A study conducted by Weave showed that cases of sexual violence has increased in Asean members Brunei, Cambodia, Indonesia, Myanmar and the Philippines.

The group noted that these countries were also conflict or postconflict zones where cases of military rape, torture and enforced disappearances of women continue with impunity.

Such is the case with the Rohingya women in Myanmar, where there have been hundreds of cases of military rape in Kachin and northern Shan state since 2011.

“There is an extra layer to the atrocities suffered by women in Burma because of their belief and identities,” said Khin Ohnmar of Progressive Voice, a Burmese advocacy group.

Burma is the former name of Myanmar.

In the Philippines, Paclarin said, women are vulnerable to an increasingly misogynistic environment “because of the way President Duterte speaks about and treats women.”

“It’s worrisome because if the head of state himself incites violence against women, then it somehow normalizes that,” she said.

To deal with these issues, Edmund Bon of the Asean Intergovernmental Commission on Human Rights said a working group would be formed to document and collate cases of sexual violence in the region.

Lily Purba of the Asean Commission on The Promotion and Protection of The Rights of Women and Children also committed to strengthening justice services for women and children.

On Saturday, local rights group Karapatan said a discussion of human rights between President Duterte and US President Donald Trump during the Asean Summit would be “big sick joke.”

In a statement, Karapatan said the two leaders had “a distorted notion of people’s rights.”

“[T]he people have nothing to expect from their upcoming empty talk on human rights, if they do talk about it,” said Cristina Palabay, secretary general of Karapatan. —With a report from Aie Balagtas See