Malaysia’s Razak back in Manila for Asean Summit 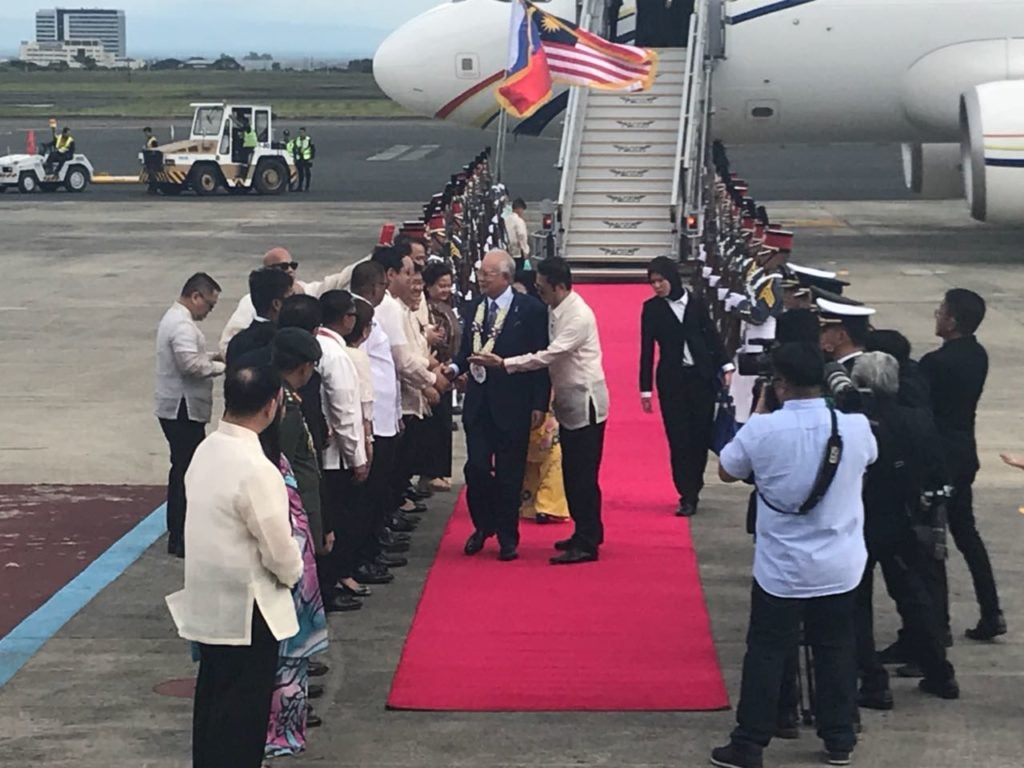 Malaysian Prime Minister Najb Razak is escorted through the red carpet after he arrived at the Clark International Airport on Sunday, Nov. 12, 2017, for the Asean Summit. JHOANNA BALLARAN

The Malaysian plane carrying Najib landed at about 12:35 p.m. at the Clark International Airport. He was welcomed by Presidential Adviser on the Peace Process Secretary Jesus Dureza.

Najib is set to meet President Rodrigo Duterte and other Asean leaders and its dialogue partners in the next three days in different venues in Manila.

Najib, the sixth prime minister of Malaysia, has been haunted by issues of corruption in his home country. He was accused of channeling about US$700 million of state investment funds into his personal bank accounts, triggering calls for his resignation.

The scandal has also prompted Malaysia’s Justice Department to launch an investigation into his and his family’s personal wealth.

Malaysia, one of the founding fathers of the Asean, has played a crucial role in the Asean, particularly in maintaining peace and security in the region. It has provided aid and assistance to countries plagued with threats of rebellion and terrorism, including the Philippines.

It stands as the third party facilitator in the peace negotiations between the Philippine government and the separatist Moro Islamic Liberation Front.

In October, Malaysia forged a deal with the Philippines and Indonesia to conduct joint air patrols to monitor suspicious activities in the Sulu Sea, an area known to be plagued by terrorists. The agreement was in addition to the joint maritime patrols that took off in June.

The move was seen as a boost against the growing threat of extremism in the region as Islamic State forces attempted to take control of Marawi City.

Malaysia posted the Asean’s second-highest foreign direct investments in 2016 with US$13.5 billion, next to Singapore’s US$61.6 billion. Malaysia has the third highest GDP per capita with $9,502 and classified by the World Bank as an upper-middle income country, together with Thailand. /cbb