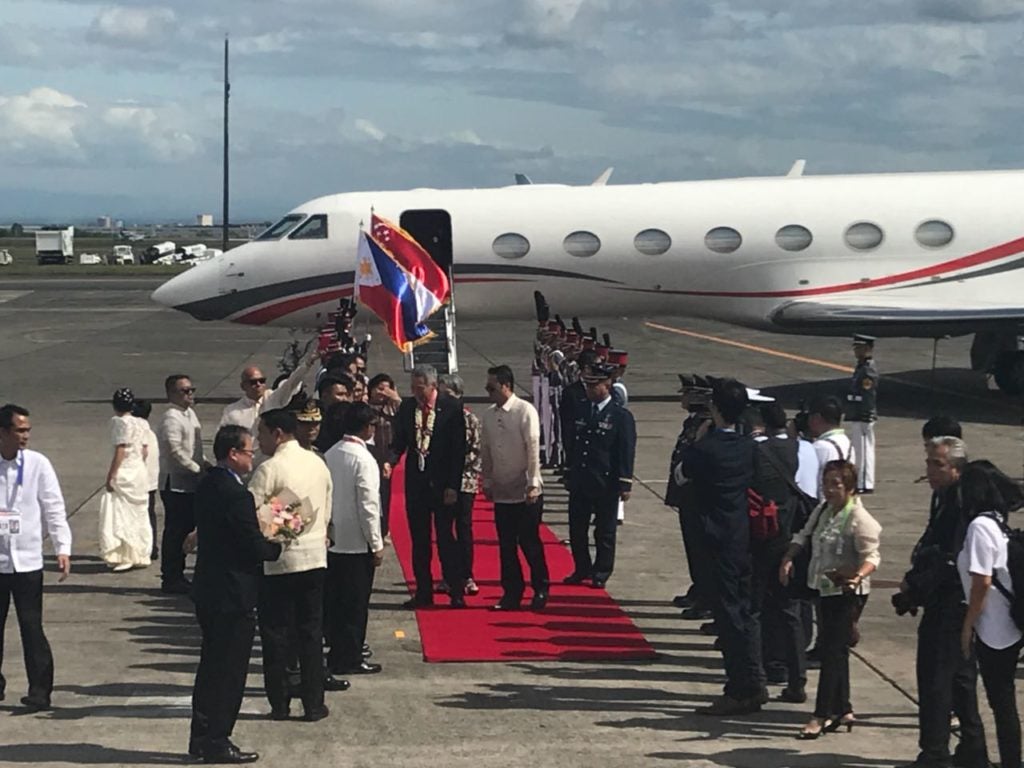 Singaporean Prime Minister Lee Hsien Loong gets a warm welcome at the Clark International Airport where he arrived Sunday, Nov. 12, 2017, to attend the Asean Summit in Manila. JHOANNA BALLARAN

Aboard a government plane, Lee landed at the Clark International Airport at about 1 p.m. He was welcomed by Public Works Secretary Mark Villar.

Lee is set to meet President Rodrigo Duterte and other Asean leaders and its dialogue partners in the next three days in different venues in Manila.

Lee met Duterte during the 30th Asean Summit in April and during the Filipino leader’s state visit in Singapore in December 2016. Duterte discussed with Singaporean leaders measures on how to boost trade and investment between the two countries.

Lee, son of the late Singaporean leader Lee Kwan Yew, was recently denounced publicly by his younger siblings over the fate of their family home and for allegedly abusing his power.

The public family feud dominated Singapore’s news in June, with his siblings accusing him of wanting to turn their ancestral home into a monument of the Lees to bank on his father’s name for political gains.

The Philippines and Singapore have enjoyed warm bilateral relations. In 1997, the two countries inked the Philippines-Singapore Action Plan, which establishes the framework for bilateral cooperation in areas such as economics, information technology, education, and defense.

Singapore is the Philippines’ fourth largest trading partner in Asia, next to Japan, China, and the United States. The bilateral trade between the two is estimated at $8.8 billion.

About 180,000 Filipinos also work in Singapore.

One of the founding members of the Asean, Singapore is the richest country in the bloc. It has the highest growth domestic product (GDP) per capita with US$52,960 and foreign direct investments of US$61.6 billion in 2016.

But despite being the top among Asean members in terms of nominal figures, Singapore’s GDP growth rate in 2016 was the second lowest in the region with 1.9 percent, following Brunei Darussalam. The country’s Ministry of Trade and Industry attributed this to slow private consumption and expenditure.

With 3.4 percent of its GDP going to the military, the city-state is the second largest military spender in the region, next to Brunei Darussalam. /cbb

Read Next
Malaysia’s Razak back in Manila for Asean Summit
EDITORS' PICK
‘A greener, cleaner tomorrow’: A how-to guide for Filipinos who want to help with today’s energy crisis
Batangas execs, Taal evacuees thank House; hopeful on rehab efforts
US Navy helicopter crashes in PH sea; 5 crew members rescued
Get exciting deals and discounts when you download the new McDonald’s App
SM continues to send relief assistance to remote towns in Batangas
Bato to reapply for US visa if Duterte wants him to join US-Asean summit
MOST READ
Taal’s sulfur dioxide emission increases
US Navy helicopter crashes in PH sea; 5 crew members rescued
Megan Young, Mikael Daez get married
No time for revelry; Tagaytay instead plans for alert level 5
Don't miss out on the latest news and information.

No time for revelry; Tagaytay instead plans for alert level 5