Cambodian Prime Minister Hun Sen arrived in the Philippines on Saturday in time for the 31st Association of Southeast Asian Nations (Asean) Summit and Related Summits.

Sen was the first leader to arrive in the country for the Summit. He was welcomed in a Filipino feast-like ceremony with 2,000 children wearing Filipiniana attire and performing traditional dance. 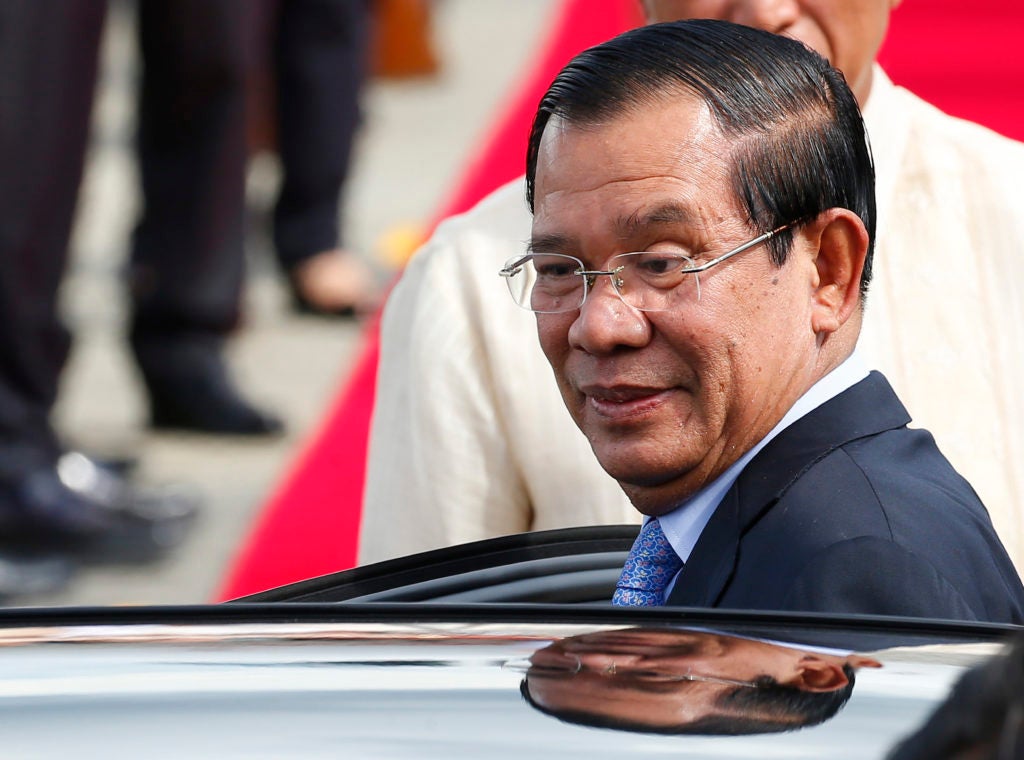 Cambodian Prime Minister Hun Sen arrives at Clark International Airport, north of Manila, Philippines Saturday, Nov. 11, 2017. Hun Sen is one of more than a dozen leaders who will be attending the 31st ASEAN Summit and Related Summits in Manila. (AP Photo/Bullit Marquez)

The strongman, who has served as Cambodia’s PM for more than 30 years, arrived at the Clark Freeport Zone to meet President Rodrigo Duterte and other Asean leaders in the next three days in different venues in Manila.

The Philippines is the chairman of this year’s Asean Summit, which coincides with the regional bloc’s 50th anniversary. 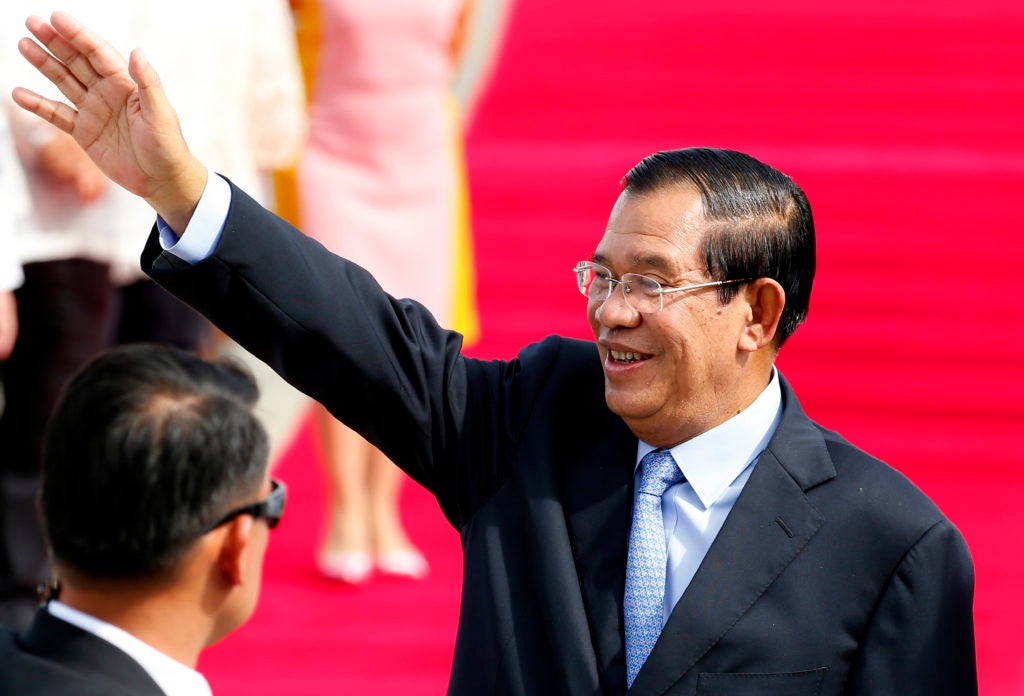 Cambodian Prime Minister Hun Sen waves to the crowd as he arrives at Clark International Airport, north of Manila, Philippines Saturday, Nov. 11, 2017. Hun Sen is one of more than a dozen leaders who will be attending the 31st ASEAN Summit and Related Summits in Manila. (AP Photo/Bullit Marquez)

Duterte met with Hun Sen in April during the sidelines of the 30th Asean Summit and in December last year during his state visit to Cambodia. The two leaders inked four bilateral agreements on anti-transnational crime, tourism, labor protection, and sports.

Sen has commended Duterte for standing up against Western countries and even cited the Filipino leader in Cambodian government’s crackdown against illegal drugs.

The prime minister has been in power since 1985, making him the world’s longest-serving prime minister. He was last reelected in 2013 for another five-year term amid allegations of fraud. 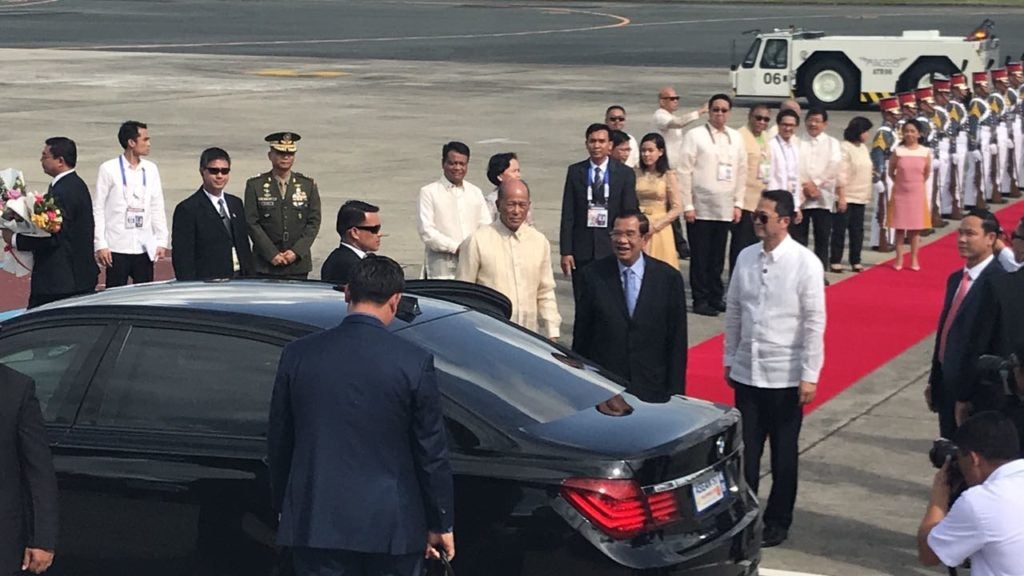 Cambodia is a known ally of China, which claims a large part of the South China Sea, including areas within the Philippines’ exclusive economic zone. It reportedly blocked efforts to mention in Asean statements the ruling of the international arbitral tribunal on a petition filed by the Philippines.

However, the government maintained that the sea dispute “is not the defining issue” of the bilateral relations between Cambodia and the Philippines.

Cambodia is the youngest member of the Asean. 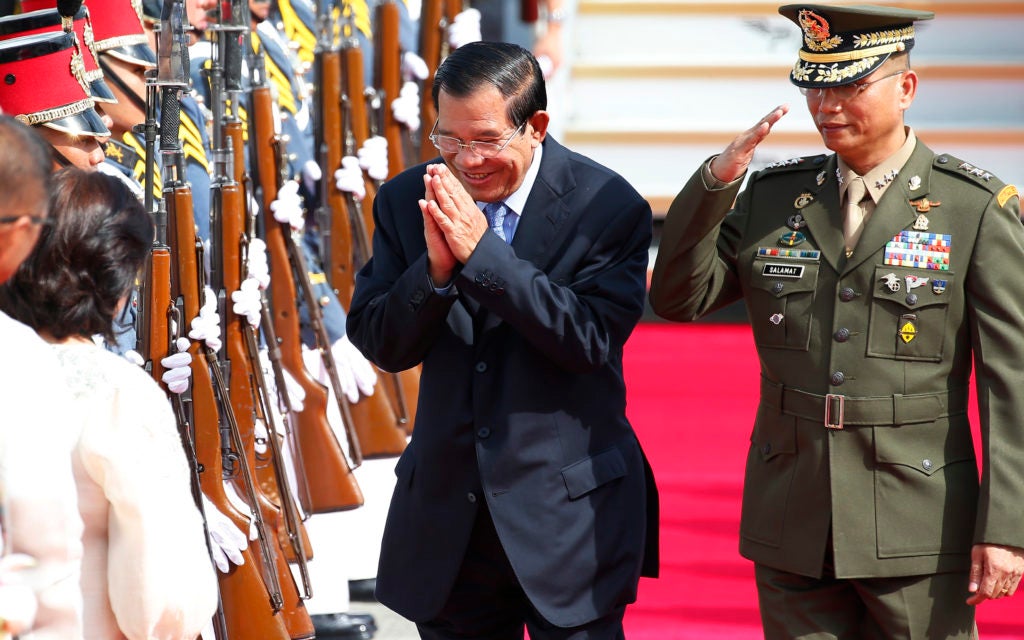 Cambodian Prime Minister Hun Sen greets well-wishers shortly upon arrival at Clark International Airport in Clark, Pampanga province north of Manila, Philippines Saturday, Nov. 11, 2017. Hun Sen is one of more than a dozen leaders who will be attending the 31st ASEAN Summit and Related Summits in Manila. (AP Photo/Bullit Marquez)

Despite posting 6.9-percent GDP growth in 2016, the country remains the poorest in the region in terms of gross domestic product per capita at US$1,270, next to Myanmar. It is a lower middle income country and its economy relies on agriculture, which accounts for almost a third of the Cambodia’s economy. /jpv