‘See you tomorrow,’ Trump tells Duterte during meetup at Apec

“See you tomorrow,” Special Assistant to the President Christopher “Bong” Go quoted Trump as saying to Duterte upon their meeting, referring to the 31st Association of Southeast Asian Nations (Asean) Summit in the Philippines.

In a televised press briefing, Presidential Spokesperson Harry Roque described the meeting as “warm and cordial.”

“It was a brief meeting. I, myself, was not present in the room but I got the information from Secretary Bong Go, who is the Special Assistant to the President,” Roque told reporters.

“Albeit short, it was very warm and cordial and President Trump reportedly told President Duterte that he will see him tomorrow,” he added.

Trump is expected to arrive in Manila on Sunday for the Asean Summit and Related Summits. /jpv 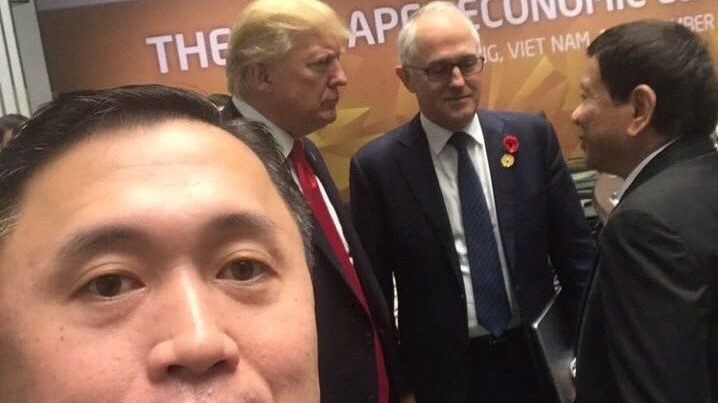 US President Donald Trump is seen having pleasantries with President Rodrigo Duterte during the Apec event in Vietnam. Photo by Special Assistant to the President Christopher “Bong” Go

Read Next
Cambodian PM Hun Sen arrives in PH for Asean Summit
EDITORS' PICK
Quarantine violations still punishable despite deleted provisions in ‘Bayanihan 2’ – Bato dela Rosa
‘Puno na lahat:’ Metro workers brave lack of public transport, rains on Day 1 of GCQ
Leveling up your ‘lutong bahay’ with the kitchen companion you never knew you needed
Someone from the Philippines can become $356 Million richer this Tuesday
BFP raises general alarm over Mandaluyong fire
Cherry Mobile teams up with Cloud Panda PH, launches online store
MOST READ
‘If I had not been SolGen, I will make you eat your words,’ Calida tells Coco Martin
Quarantine passes no longer required under GCQ, but curfew remains
5 car dealership outlets shutting down
BFP raises general alarm over Mandaluyong fire
Don't miss out on the latest news and information.