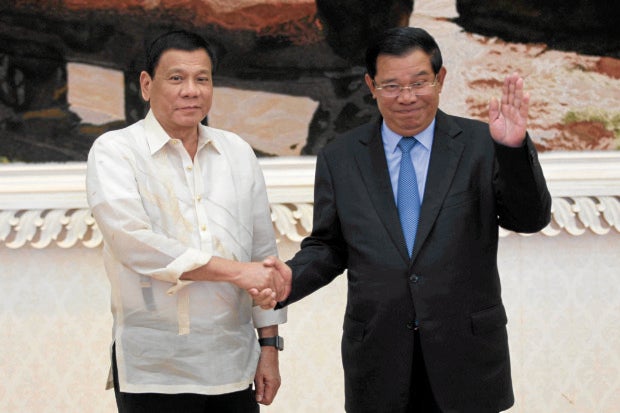 PHNOM PENH—The friendship between the Philippines and Cambodia could withstand regional and international challenges, President Duterte declared on Wednesday, as the two countries reaffirmed their long-standing ties at the end of his state visit here.

Mr. Duterte thanked Cambodian leaders for the warm welcome given to him and his delegation in a banquet hosted by King Norodom Sihamoni on Wednesday evening during his two-day visit.

He said he was “humbled and honored,” adding that the two countries’ renewal and reaffirmation of their relationship augured well for future bilateral relations.

“My visit to Cambodia has impressed upon me that ours is a friendship based on mutual respect and support,” he said.

The friendship, he said, is one with a commitment to a shared future.

“It is a friendship that can withstand the challenges of an evolving regional and international environment,” he said.

Mr. Duterte did not mention the South China Sea dispute in his message. Phnom Penh earlier blocked attempts to mention Manila’s international tribunal victory over Beijing in the closing statement of an Association of Southeast Asian Nations (Asean) summit in September in the Laotian capital of Vientiane.

Cambodia is a staunch ally of China.

In a ruling in July, the UN-backed Permanent Court of Arbitration in The Hague invalidated Beijing’s claim to nearly the whole of the South China Sea.

Mr. Duterte also said that as close neighbors, the Philippines and Cambodia had a common stake in keeping Asean “strong, relevant and responsive.”

The two countries must work together to seek innovative ways to bring prosperity to the region, and to make Asean a cohesive and vibrant community, he said.

The Philippines is counting on Cambodia’s “active support” when it chairs the Asean summit next year, as the bloc marks its 50th anniversary, he said.

Mr. Duterte said he was committed to using bilateral agreements and platforms to move cooperation between the two countries forward.

“As we face a future that is increasingly interlinked, we draw upon our common historic experiences to help chart a path toward greater peace, progress and prosperity enjoyed by our peoples,” he said.

Mr. Duterte said ties between the Philippines and Cambodia had been improving over the years, with regular exchanges of visits between their officials to forge closer links and bilateral trade.

An increasing number of Filipino companies have set up business in Cambodia, he said.

The two countries have also drawn together during trying times, with the Philippines providing assistance in building capacities for law enforcement and securing holy places in Cambodia, he said.

The Philippines also helped build communities and was involved in rural electrification, as well as education and sports programs, he added.

During his two-day trip to Phnom Penh, Mr. Duterte had an audience with the King at the Royal Palace, where he was given arrival honors.

He also had discussions and expanded bilateral meeting with Prime Minister Hun Sen, where they discussed ways to work together to deal with illegal drugs and crime, and also tackled defense cooperation.

The leaders also discussed plans to hold a Philippines-Cambodia trade fair, as well as the establishment of air services between Manila and Phnom Penh.

They talked about technology transfer from the Philippines’ International Rice Research Institute to improve rice seeds, as well as the construction of 100-percent Filipino-owned rice warehouses in Cambodia.

There are also plans to offer Philippine scholarships for Cambodians, particularly in science and engineering.