Duterte to discuss N. Korea, trade with Abe during two-day visit to Japan 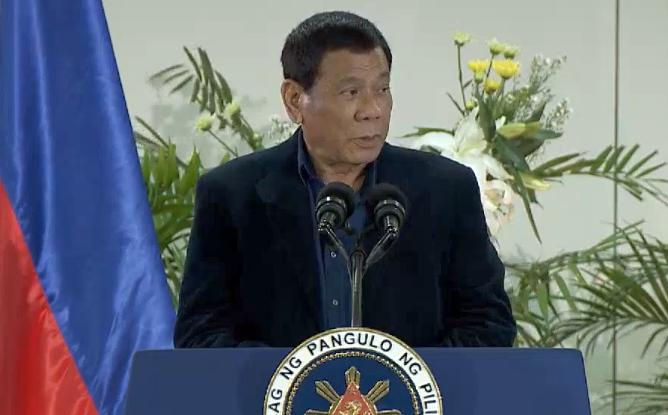 President Rodrigo Duterte said on Sunday night that he would discuss North Korea and trade issues with Japanese Prime Minister Shinzo Abe during his two-day official visit to Japan.

He said he was hoping that Japan would provide “significant assistance” for the rebuilding of war-torn Marawi City.

“I therefore look forward to meeting once again Prime Minister Shinzo Abe who I consider to be a true friend of the Philippines,” Duterte said in a speech at the Davao International Airport before flying out to Japan.

The trip was originally scheduled for June, but he canceled it because of developments in Marawi City, parts of which Islamic State-inspired terrorist held, starting on May 23.

The President he would convey the country’s gratitude to Abe for “Japan’s steadfast and unprecedented support for our country, our people, and government.”

“I will discuss with him ways to significantly advance our already strong and strategic bilateral relations, especially on matters involving socio-economic development, peace and progress in Mindanao, and the build-up of modern infrastructure in the country,” the President said.

“We will likewise disucss the advancement of the rule of law in relations among nations to support greater stability and security in the region,” he added.

Duterte said he wanted to discuss the problem of North Korea and “how to deal with this problem if it gets worse.”

He added that he would also discuss the tariffs that Japan imposes on Philippine exports.

“That would keep me busy for the rest of the day,” he said.

He said he also looked forward to meeting Emperor Akihito and Empress Michiko, to whom he would bring the Filipinos’ warm greetings.

“I suppose that I have to limit my mouth there,” he said. “I expect to bring the warm greetings of the Filipino nation, a grateful nation, to Japan. It’s a kind of homage to see the Emperor before he abdicates.”

The President’s official delegation includes the following members of his Cabinet:

He said his meeting with the emperor would be “kind of a homage to see the emperor before he abdicates.” –With a report from Frinston Lim in Davao City